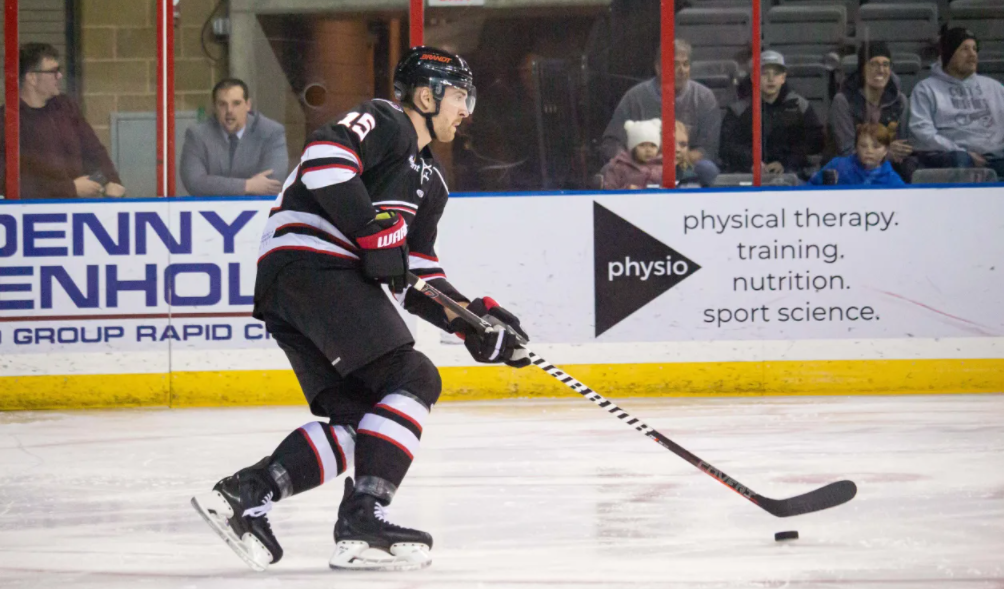 Iowa scored the first seven goals of the game, including two on the power-play, tying a franchise record for goals in a game and setting a mark for the largest margin of victory

RAPID CITY, S.D. – Jake Smith scored the first hat trick in franchise history as the Iowa Heartlanders blew out the Rapid City Rush, 9-1. Iowa scored the first seven goals of the game, including two on the power-play, tying a franchise record for goals in a game and setting a mark for the largest margin of victory. Cole Stallard continued his hot streak with two goals and Jack Billings added two as well. Corbin Kaczperski earned his second win of the year, stopping 39 shots.

Iowa took control of this game from the start, scoring four goals in the first period. Zach Remers got the scoring started at 6:55, netting his first goal of the year. Billy Constantinou, who had four assists in the game, passed the puck to Remers at the left faceoff circle. Remers had his back to the net, but made a spin move, directing a wrist shot that hit off a Rapid City defenseman and went in.

Less than a minute later, the lead became two. This time, Joe Widmar passed the puck to Stallard at the right faceoff circle, who fired a wrist shot over the shoulder of David Tendeck for his fifth goal of the year.

With just over three minutes left in the first, the lead became three. Smith passed the puck to Billings in the high slot, who quickly corralled the puck onto his stick, then launched a blistering wrist shot by Tendeck to give the Heartlanders a 3-0 lead. That would be it for Tendeck, who left after giving up three goals on 10 shots.

The Heartlanders played “beat the clock” in the first when Jake Smith made it a four-goal lead with his first goal of the night with 15 seconds left. The Heartlanders were on the power-play when Bryce Misley made a pass through the slot to Smith at the backdoor, who blasted a one-timer by Hayden Stewart for his third goal of the year.

Iowa had dominated every facet of this game, outshooting Rapid City 15-7 in the first. The Rush came out of the locker room and had the better of the play in the second period, but it was Iowa extending their lead to seven before the second intermission.

Smith scored his second goal of the night on the power-play 67 seconds into the period to make it a five-goal lead. Constantinou dished the puck to Smith at the top of the left faceoff circle, who drilled a wrist shot by Stewart.

Just past the game’s midway point, the lead became six when Kaid Oliver and Stallard entered the Rush zone on a 2-on-1. Oliver passed the puck into the slot to Stallard, who redirected the puck on Stewart. The puck trickled through the Rapid City netminder and in for his second goal of the game.

With just over four minutes left in the period, Billings netted his second goal of the evening. Constantinou had the puck at the point, firing a shot that hit off Billings and went in. That was his ninth goal of the year.

The Rush finally broke the run, 4:10 into the third period. The Rush were on the power-play when Brett Gravelle passed the puck back to the point to Gabriel Chabot who blasted a slapshot that beat Kaczperski for his seventh goal of the season.

That was the one bright spot of the contest for Rapid City, as Iowa added two more goals despite the Rush outshooting the Heartlanders 18-12 in the final frame. Widmar scored almost exactly a minute after the Chabot goal, wristing a shot by Stewart. With a little over eight minutes left in the game, Smith completed the hat trick, ripping in a one-timer to make it 9-1.

Kaczperski finished with 39 saves in another impressive performance. Smith had three goals and two assists. His five-point night was a franchise record. Stallard and Billings each had two goals and an assist, and Widmar had a goal and two assists. Misley had three assists as Iowa had six players with at least three points.

The Heartlanders return home on Friday to welcome the Kansas City Mavericks. The puck drops at 7:00.