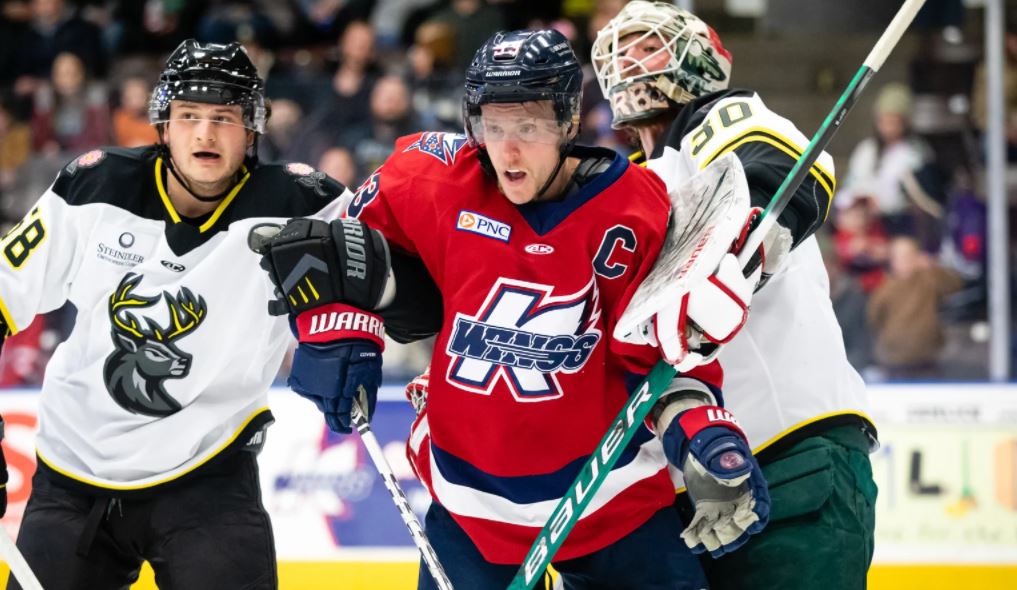 KALAMAZOO, Mich. – Jake Smith continues to impress, scoring a pair of power-play goals to help lead the Iowa Heartlanders to a 5-2 victory over the Kalamazoo Wings on Friday evening. Iowa sealed the victory with three third-period goals, including one by Cole Stallard, who also added an assist. Dereck Baribeau stopped 29 shots, moving to 3-0-1 in his four appearances with Iowa.

Kalamazoo had two early scoring chances when shots clanked off the post, but it would be Iowa that took the lead 9:26 into the contest. A clearing attempt deflected off Kris Bennett and right to Fedor Gordeev. He lifted a backhander by Trevor Gorsuch for his third goal of the year.

The lead held into the second, but Smith scored less than a minute into the frame to extend the lead to two. That came with Iowa on the power-play as Ryan Kuffer lifted a wrist shot that Gorsuch knocked down, but Smith sped in, gaining control of the rebound before firing it past the Kalamazoo goaltender on the short side for his 14th goal of the season.

The Wings responded almost exactly four minutes later. With Kalamazoo short-handed, Erik Bradford gained control of the puck inside the Heartlanders zone, beat Baribeau with a shot for his 11th goal of the year.

Iowa held on to the one-goal lead through 40 minutes but blew this game open in the third. For the second time in the contest, Smith scored in the first minute of a frame. The Iowa forward delivered another power-play goal as Kuffner moved the puck to Smith, who beat Gorsuch for his second goal of the game and the third multi-goal game of the season.

Right at the one-minute mark, Ben Sokay extended the lead to three. The Heartlanders kept the pressure on after the Smith tally, as Stallard passed the puck to Sokay, who beat the Kalamazoo netminder to the glove side to make it 4-1. It was the sixth goal of the season for Sokay.

Logan Lambdin scored just after the three-minute mark to cut the deficit to two. At the right faceoff circle, Andrew DeBrincat passed the puck to Lambdin, who blasted a one-timer by Baribeau to cut the Iowa lead to two.

However, with just under four minutes left, Stallard sealed the victory, taking a pass from Kaid Oliver and beating Gorsuch for his eighth goal of the year. That made it 5-2, which would be the final.

Kuffner added two assists to give him 20 for the season, placing him second on the Heartlanders. Iowa continues their ascent up the standings, now sitting four games below .500 and just six points behind fourth-place Wheeling for the final playoff spot.

These two teams will go at it again tonight, with puck drops set for 6:00 Iowa time.