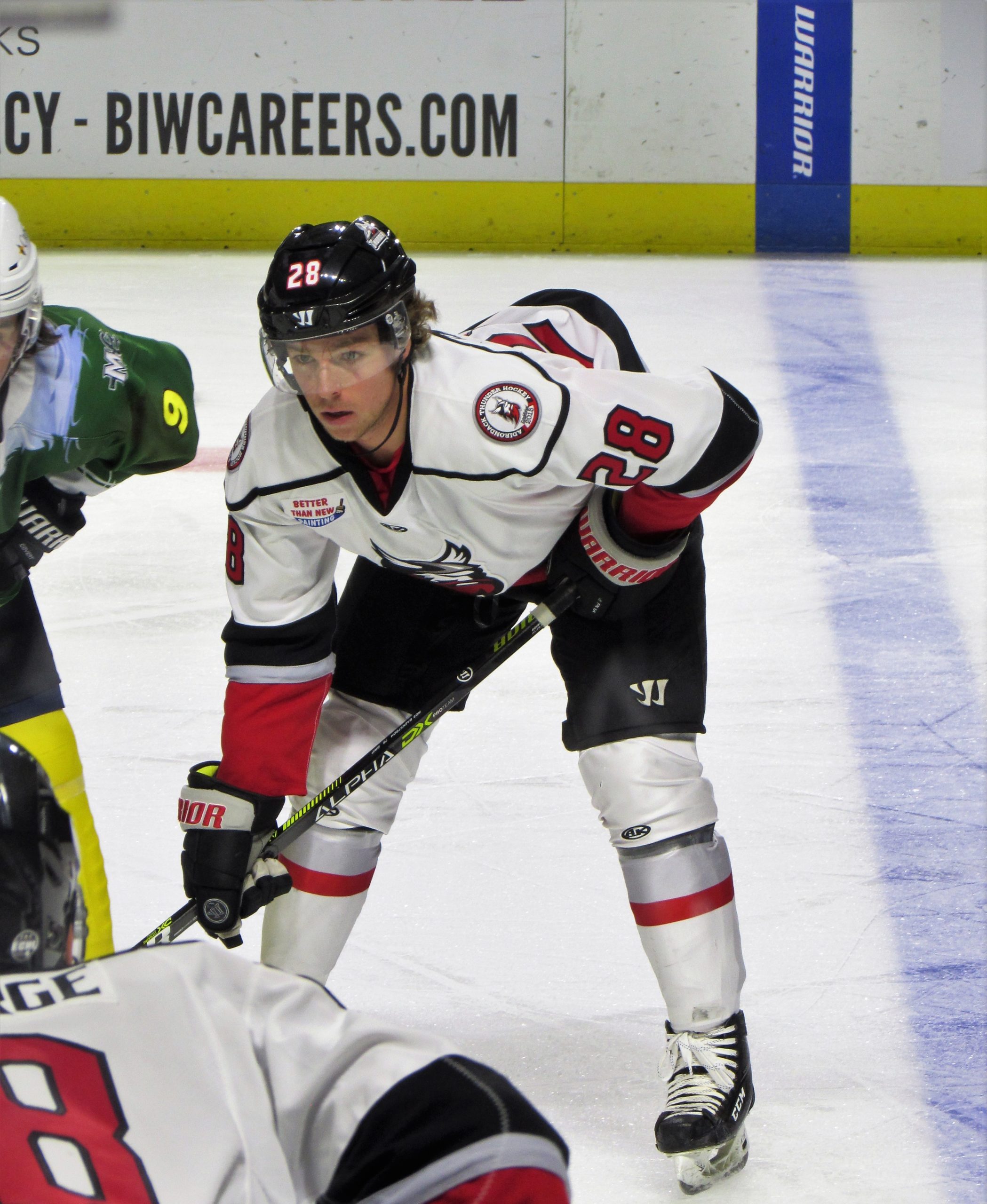 GLENS FALLS, NY – Adirondack Thunder forward Ryan Smith isn’t known for being a flashy player.  In fact, you likely won’t even notice him on the scoresheet most nights.  You will notice him on the ice, however.  Smith will be doing all those little things the ECHL doesn’t provide stats for, such as hits, blocked shots, and overall hard work.  So when he does end up on the scoreboard, it’s an added bonus.  The Thunder are currently seeing that added bonus in the form of a three-game goal-scoring streak for the third-year pro.

Smith has never put up the numbers that normally stand out to fans.  In his four years at the University of Maine, he registered only 35 points (18 goals, 17 assists) in 126 games.  His hard work and leadership did earn him the role of alternate captain his senior year, which is a large reason Adirondack signed him in 2020.

“Watching video on him, he seems to be a similar player…Solid, defensive, plays hard, competes, does all the right things.”

Due to the cancellation of the entire North Division’s season in 2020-21, Smith signed with the Macon Mayhem of the SPHL, where he had his most productive season to date.  As a rookie, Smith picked up 26 points (9 goals, 17 assists) in 42 games with Macon and also appeared in his first few ECHL games with the Tulsa Oilers.

The Thunder brought Smith back for the 2021-22 season.  In his 70 games last season, he picked up 27 points (11 goals, 16 assists) and earned himself a two-game stint with the AHL’s Springfield Thunderbirds.  For his first full season in the league, 27 points were impressive.  But those who care more about the “little things” likely noticed Smith’s presence when he blocked a shot or laid down a big hit to take an opponent out of the play.  He also read plays like a veteran and always seemed to be in the right place at the right time, creating plays for his team and breaking them up for opponents.

When Adirondack signed Smith for the 2022-23 season, it was more for his hockey knowledge, hard work, and consistent effort than for his point production.

When announcing Smith’s re-signing, Head Coach Peter MacArthur had this to say about the forward:

“He’s a guy that’s around the puck a lot, he’s got NHL tools, he has an NHL body, great work ethic, great guy in the locker room, and he’s someone that we’re really looking forward to taking a step.”

Smith hasn’t disappointed.  He has continued to be one of the smartest and hardest-working players on and off the ice, and has been rewarded as the go-to guy on the penalty kill and also sees time on the power play.  He just hadn’t had the points to show for it (only four assists in his first 21 games).

In last week’s 7-0 victory over the Worcester Railers, Smith came alive on the scoresheet as well, picking up his first goal of the season and adding an assist later in the game.

RYAN SMITH GETS HIS FIRST OF THE SEASON pic.twitter.com/mUYx34oiGa

MacArthur Friday: “He’s a guy that any team would like to have.  It’s not on him to score, he does so many other things.  I don’t know the other teams’ personnel that well, but he’s probably top five penalty-killing forward in the whole league, which is really really important when we’re like 87, 88% on the PK.  Tonight he started as the extra, but he’s still first over the boards PK and he’s on the power play.  He’s very valuable and it’s awesome that he scored, but what he does is so important for us, it’s essential.  He’s a guy that hopefully is here, unless he’s at a higher level, hopefully he’s with us for as long as possible.”

In Adirondack’s next game, a 3-2 comeback win over the Trois-Rivières Lions, Smith scored twice in the third period, the game-tying and game-winning goals.

Smith gets the tip from Rivera and we're all tied up here in TR! pic.twitter.com/M2f2kLJEfy

BREAKAWAY FOR SMITH AND IT'S THREE UNANSWERED GOALS FOR THE THUNDER pic.twitter.com/RbQNRtXXj2

The goals didn’t stop there, as Smith also scored in Adirondack’s latest game, a 4-2 loss to the Lions Thursday night.

RYAN SMITH WITH THE TIP IN FRONT! pic.twitter.com/2Xe4uoeLTO

And just like that, Smith’s point production had more than doubled in only three games.

Adirondack will host Worcester again Friday before Trois-Rivières comes to town for the third matchup this week between the two teams.  With his current goal-scoring streak, MacArthur’s confidence in him, and with upcoming opponents he and his team have had success against, Smith has to be flying high right now.