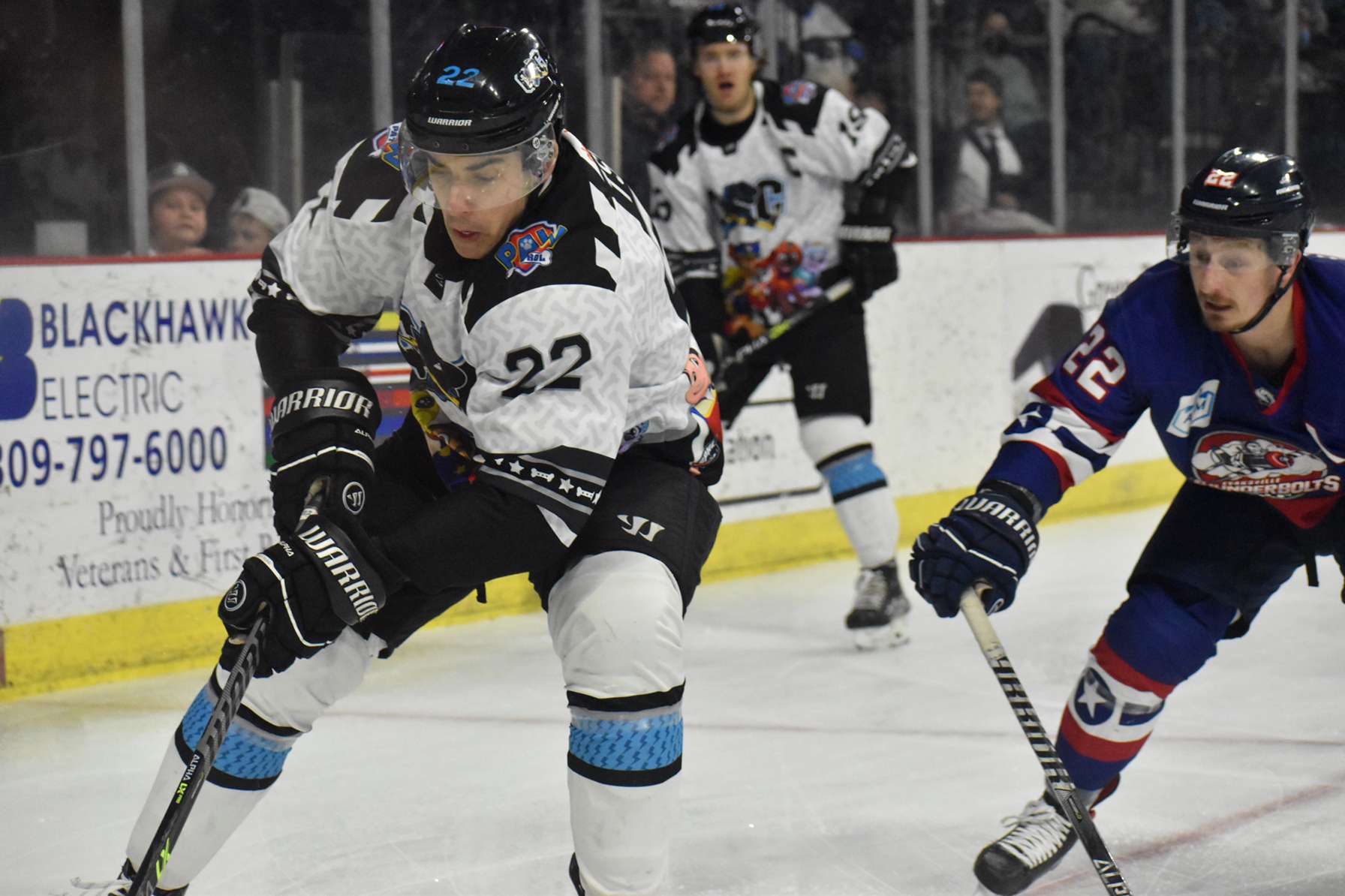 Soaring Storm Shut Down by Rivermen

It was a weekend of vastly different games, with comebacks and near reversals of luck.

Soaring Storm Shut Down by Rivermen

MOLINE, Ill. – The Quad City Storm took four out of six points this past weekend, defeating the Evansville Thunderbolts on Friday and Saturday, with a score of 4-3 and 5-2 respectively, before losing 5-1 on Sunday to the Peoria Rivermen. It was a weekend of vastly different games, with comebacks and near reversals of luck.

Friday night, the Storm came out looking great, going up 3-0 against the Thunderbolts thanks to Marcus Ortiz and Nick Mangone, the latter having a successful penalty shot early in the second period. The Storm stayed out of the penalty box for all of period one, scoring their first goal of the night just over 30 seconds into their first power-play midway through the opening frame. For all the good that the first two periods were, the third period was just as bad.

“I thought we played a pretty sound 40 minutes…and then third period was kind of opposite. We need to clean up some D-zone issues. We can’t panic when we get into situations like that. Got a little close there, a little too close for my liking, but a win’s a win,” said Coach Dave Pszenyczny after Friday’s game.

The Storm gave up three goals in ten minutes during the third period, the first being while they were on the penalty kill. Though Shane Bennett added to the score to make it 4-1 with just over five minutes remaining in the game, the Thunderbolts scored twice more in the following three minutes to nearly tie the game up to send it to overtime.

“When we were in the penalty box, there in the third period, that’s not where we want to be and we know that’s how that team gets back in the game. We’ve got to turn the page. I know players were talking about that in the locker room after, so that’s always good,” said Pszenyczny Friday.

Saturday was the polar opposite of Friday, the Thunderbolts controlling play the first period and into the second. The visitors went up 2-0 just under midway through the second period, but shortly after the goal by Cameron Cook, David Brancik ended the shut-out bid and the Storm began their comeback.

The Storm scored five unanswered goals on their way to Saturday’s victory, the last two being empty-net goals scored by Mangone and Cole Golka.

“I didn’t think we played a good 40, so opposite of last night. But in the third period, we didn’t start it like how we wanted to but we sure finished it the way we wanted it to. Just the difference of when we want to play the game the proper way and kind of be a little selfless. Just amazing what that team can do now,” said Pszenyczny Saturday night after the game.

The Storm seem to have a problem putting together a full 60-minute game, either playing well for most of the game but then taking their foot off the gas and nearly losing, or playing poorly but finding some mettle in the tank to close out the game with a comeback win. Come time for the playoffs, that strategy won’t work well for them.

Sunday’s game was all Peoria, as the Storm traveled down I-74 to take on the Peoria Rivermen in what would be both teams’ third game in as many days. It was a performance akin to Saturday’s first 40 minutes for the Storm, as they lost 5-1.

Sunday’s game was marked by an unsuccessful power play for the second night in a row, once again not scoring on five chances on the man advantage. The Storm looked tired throughout the game, which was reflected on the scoreboard. Alec Baer’s second goal of the night came on a powerplay less than two minutes into the second period, as Connor Fries was assessed a roughing penalty at the 20-minute mark of the first period for some post-horn scrum action. The fourth goal scored by Peoria came as there was action behind the play, Kyle Heitzner fighting with Dale Deon as play continued from the Peoria zone down to Kevin Resop where the goal was scored.

“If we’re grading out of 10, probably a 4,” assistant coach Jake Toporowski said on Sunday. “We competed. It wasn’t our smartest compete, but we competed. Yeah, the scoreboard kind of tells the story.”

The Storm will be on the road this coming weekend for another three-in-three, traveling to Fayetteville to take on the Marksmen on February 25, 26, and 27th. There are only three home games remaining for the Storm this season, the other 11 being on the road.

“It’s nice that we’re gonna be on the road… You build a little camaraderie when you’re out there, staying at hotels. It’s just like a different element and it’s gonna be great for us when it comes to the playoffs,” said Pszenyczny Friday.

Be sure to follow @FPHStorm on Twitter for the latest news and live in-game tweets about the Storm.