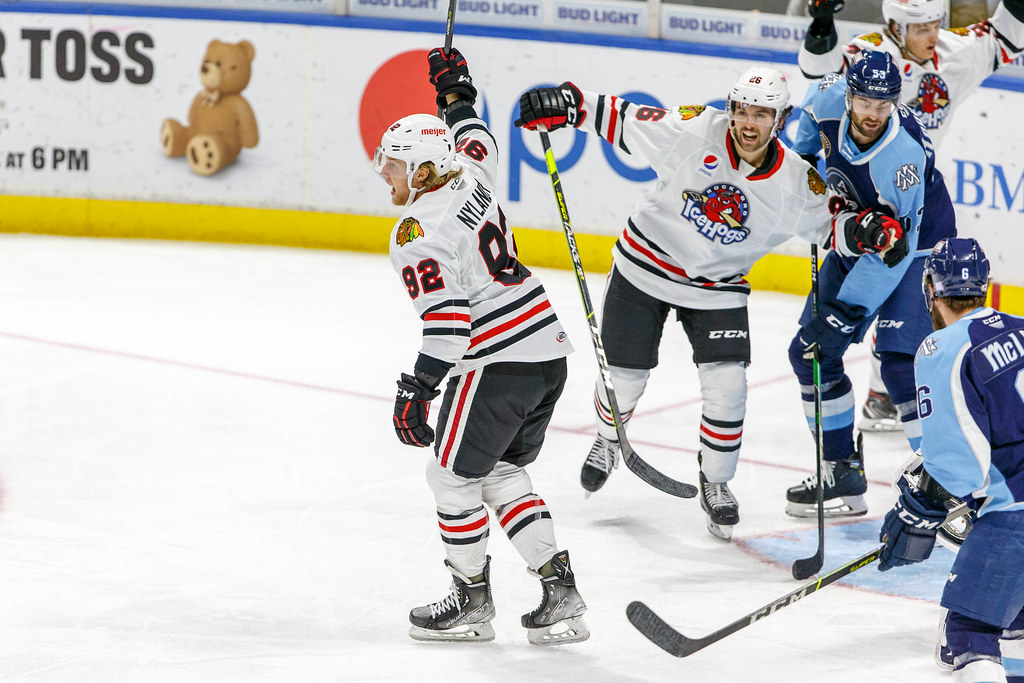 ROCKFORD, Ill. – Rockford IceHogs goalie Arvid Soderblom got his second start against the Milwaukee Admirals in three days Sunday afternoon at the BMO Harris Bank Center. Another look was just what the doctor ordered.

The IceHogs combined timely scoring with 36 saves from their rookie netminder, finishing the third game of a busy weekend with a 2-1 victory over Milwaukee. Rockford improves to 6-7-1-1 on the season and avenged a lopsided loss to the Admirals on Friday.

Milwaukee struck quickly to open the game, scoring on a Matt Luff goal 52 seconds into the first period. Former Hogs forward Graham Knott set Luff up on the odd-man rush into the Rockford zone. Soderblom could not corral the wide open Luff on the shot attempt. However, it would be the last puck that the Admirals would get to the back of the net.

Rockford responded at the 3:05 mark. Kale Howarth picked up his first AHL goal, getting a blade on Issak Phillips‘ shot to the Milwaukee net. The puck slipped past Admirals goalie Connor Ingram and settled into the twine, tying the game at a goal apiece.

The score would remain 1-1 for the next forty minutes of action, with both teams fending off the other. Rockford was denied a conversion on a two-man advantage early in the second period. The Hogs, in turn, leaned on Soderblom, who made 19 stops in the middle frame.

The IceHogs broke the stalemate 4:13 into the third period, with Milwaukee’s Joseph LaBate in the box for slashing. Alex Nylander backhanded a rebound of a Dylan McLaughlin shot before Ingram could recover. Rockford then set about holding the 2-1 advantage.

The Admirals (5-11-1) out shot the Hogs 12-4 in the third, getting several up-close attempts and striking the post on two occasions. With Soderblom manning the crease with poise, however, Rockford held on for the win.

The Hogs and Admirals continue their season series in Milwaukee on Wednesday. From there, Rockford travels to Grand Rapids for back-to-back games on Friday and Saturday.