DES MOINES, Iowa – For the second straight game, the Iowa Wild blanked their opponent. This time, it was Kaapo Kahkonen who stopped all 22 shots he faced in the 3-0 victory over the Chicago Wolves. Kahkonen followed up Mat Robson’s performance, who blanked the Ontario Reign last Sunday, 3-0. Dmitry Sokolov provided all the offense the Wild goaltender needed, scoring two goals, while Kyle Bauman added two assists.
The Wild took the lead 9:58 into the contest. A relentless forecheck made it impossible for the Wolves to get the puck out of their own end. That forced a turnover as Bauman was able to gain control of the puck. He made a beautiful pass through the legs of a Chicago defender across the crease to Sokolov, who was able to redirect the puck past Chicago goaltender Garret Sparks for his first goal in an Iowa uniform.

At the 8:44 mark of the second period, it would be Sokolov once again. Bauman received a pass from Kyle Rau in the corner in the Wolves end. He skated behind the net before making a picture perfect pass to Sokolov who was in the slot. Sokolov blasted the one-timer past Sparks to extend the lead to two. 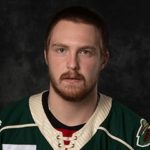 That was more than enough support for Kahkonen on this night. He had a very easy game through the first two periods, facing only 12 shots, including just four in the second. The Iowa goaltender stopped eight shots in the first, including two big saves with a little less than three minutes left in the frame. Kahkonen made a nice save on a redirection attempt by Paul Cotter, smothering the puck to force a stoppage of play.
On the ensuing the faceoff, the puck was passed to Patrick Brown in front of the Wild net, but Kahkonen absolutely stoned him with a pad save on a redirection attempt.
In the second period, Chicago was held to just four shots on net. The Iowa defense was nothing short of dominant, as the Wild headed to the second intermission outshooting Chicago 28-12.
The Wild gave their goaltender one more insurance goal at the 4:33 mark of the third period. Josh Atkinson passed the puck back to the point to Keaton Thompson, who fired a wrist shot that beat Sparks between the legs for his first goal of the year. Chicago argued that the puck had crossed the line before Thompson’s shot and that the play should have been ruled offsides. It was a very close call, but the goal stood. 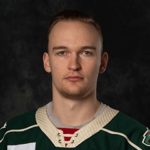 Kaapo Kahkonen: Stops 22 Shots for His Second Shutout of the Season.

Kahkonen did the rest, stopping all 10 shots he faced in the third. He finished with 22 saves overall for his second shutout of the season, and the third by the Wild this year. The Iowa netminder lowered his goals against average to 2.21 (14th in the league), and is now 7-2-0 this season. His win total ranks him third in the league.
The Iowa Wild come home to welcome the Chicago Wolves to Wells Fargo Arena on Sunday. The second game of the home-and-hone series is set to begin at 5:00 CST.
Follow Robert on Twitter for all your latest Iowa Wild updates, news, and notes!