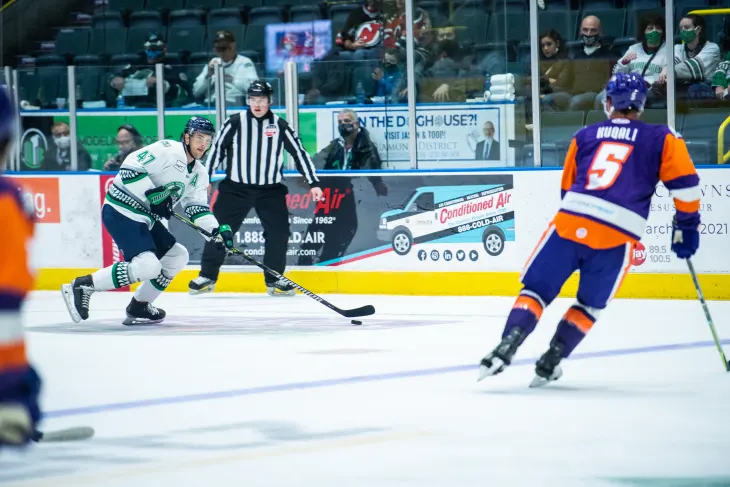 ESTERO, Fla. – The Orlando Solar Bears were defeated twice by their in-state rivals, the Florida Everblades, at Hertz Arena this weekend. They were outscored by a total of 9-4.

Adam Rockwood opened up the scoring, getting one past Everblades goaltender Cam Johnson, to give Orlando a 1-0 lead. But, Stephen Anderson, Blake Winiecki, and Joe Pendenza quickly erased that lead, giving the home team a 3-1 advantage only 4:40 into the game. Jake Coughler narrowed that gap before the period ended, scoring at 18:53.

Former Maine Mariner Alex Kile opened up the scoring for Florida in the second period, giving them a 4-2 edge. Midway through the frame, goaltenders were swapped in order to allow each member to receive playing time. Two rookies, being Michael Lackey for Orlando, and Adrian Clark for Florida entered the game. Closer to the end of the period, Nikita Pavlychev and Cameron Hebig balanced the scoring, keeping the Everblades lead at two goals.

Peter Abbandonato, under contract with the Syracuse Crunch, netted his first goal of the preseason at 13:13, but it wasn’t enough to overcome the deficit, as the Florida Everblades edged the Orlando Solar Bears by a score of 5-4. Florida outshot Orlando by a total of 35-22, while both squads were shut out on the power play. Below is the scoring, and penalty summary for each team:

As the Solar Bears looked to even the series ahead of the regular season, they gave the nod to experienced-goaltender Garret Sparks, while the Everblades stuck with Cam Johnson.

After a scoreless first period, Michigan Tech graduate Alex Smith buried one past Sparks on the powerplay to give the Everblades a 1-0 lead. Minutes later, Florida’s Cameron Hebig picked up two tallies, giving Florida a three-to-nil edge. Veteran Joe Pendenza closed the scoring for the second period with just under two minutes remaining.

Tempers flared in the third, as Florida’s Kyle Neuber and Orlando’s Rich Boyd danced, resulting in five-minute majors. Orlando could not muster any kind of comeback, and the Everblades shut them out by a score of 4-0. Cam Johnson, who played the entire game, picked up a 20-save shutout. Garret Sparks was dealt with the loss, allowing three of the four total goals.

What’s Next for the Solar Bears?

Head Coach Drake Berehowsky will make some roster cuts ahead of the season opener, which will also take place in Estero, against the Everblades. The game will be on Saturday, December 12th at 7:00 pm Eastern. The Solar Bears won’t play a home game until December 29th, where they will face-off against the Jacksonville Icemen.