The Orlando Solar Bears seemed to have many of the right pieces in place on Saturday night’s home opener against the South Carolina Stingrays. 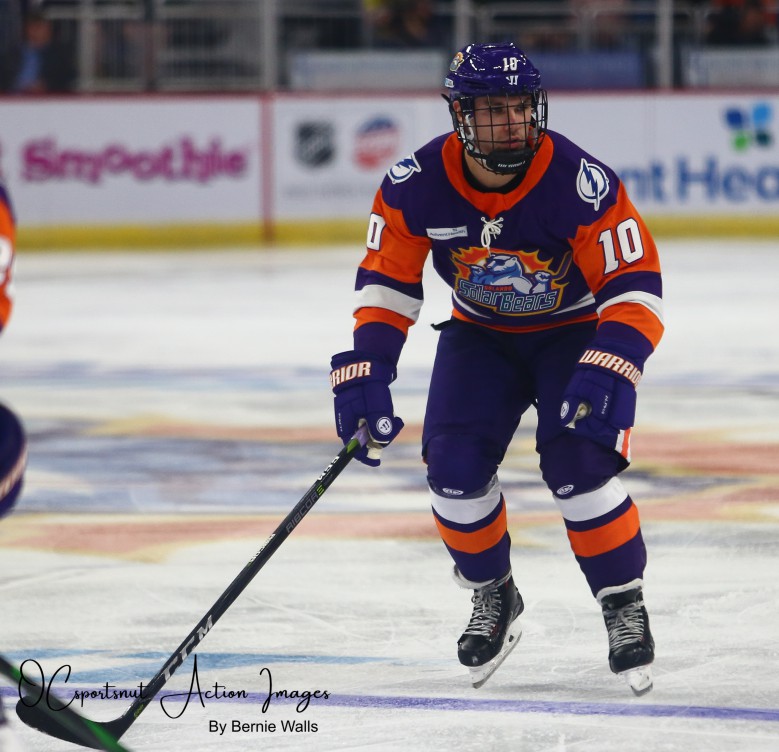 ORLANDO, Fla. – The Orlando Solar Bears seemed to have many of the right pieces in place on Saturday night’s home opener against the South Carolina Stingrays. The Amway Center was sold out with an official attendance of 9049, over half of the squad on the ice was comprised of returning players, and Head Coach Drake Berehowsky had a seasoned goalie in his net.
The South Carolina Stingrays, however, came ready to play spoiler. Thanks to the sticks of Mark Cooper and Casey Bailey, they put the Solar Bears down 2-0 before the 10:30 mark had been reached. It was a hole that Orlando could never climb out of. Tom Parisi put the nail in the coffin midway through the second period with the game-winning goal.
While Steve Bergin might be the new head coach for the Stingrays, he has the team playing the same type of stingy defense that has been the hallmark of the club. South Carolina is a team that you do not want to fall behind on, and with Parker Milner in the net, the team shows early signs of the Stingrays’ hallmark toughness. Milner ended the night saving 22 out of 24 shots on goal.
The loss means that Orlando is in something of a drought when it comes to winning a home season opener. The Solar Bears have not tasted that victory honey since 2015 and now the squad will have to wait until at least 2020 to achieve that prize.
Of course, it is easy to say the season is early, which it is, but Berehowsky and team captain Mike Monfredo will be looking to address the mental preparation of the squad before their next tilt. Adrenaline sustained the Solar Bears in the opening minutes, but when that wore off, the Stingrays were consistently quicker and their stick handling was more assured. Orlando found it difficult to move cleanly across the blue line, and too many passes missed their marks.
A ray of light hit the Solar Bears in the third period when Ivan Kosorenkov caught fire and tallied two goals in a four-minute stretch. The momentum of the game was shifting to the home team’s favor at that point, but for Orlando, it proved to be far too late. By the time the flurry developed, the Solar Bears were already behind 4-0. Kosorenkov allowed his team to regain some pride, but Orlando ended the night with a 4-2 loss.

1. Grit and Go
The Solar Bears have the talent and personnel to be contenders this year. The question will be whether they can develop the mental toughness to play sustained sixty-minute games. In the last tilt of the preseason against the Florida Everblades and in the home opener, Orlando has shown stretches of soft play. Berehowksy’s game plan requires continual hustle, and that means his players must buy into chasing down dump-ins, grinding along the boards, and battling for the puck.
2. The Transition Game
The Solar Bears were often one step behind or one degree off in its defensive zone. They missed too many opportunities to clear the puck, and their passes were too often not clean enough to make for an effective transition game. The Stingrays capitalized on this weakness and became increasingly aggressive in disrupting the passing lanes.
3. Defensive Toughness
The Solar Bears had a quality netminder with Spencer Martin, but the team needs to show discipline in around its own goal and to put pressure on the puck. They cannot expect their goalies to be miracle workers.
The Solar Bears return to the Amway Center at 7 p.m. Friday night when they take on the Norfolk Admirals. Both teams will be hungry and looking for their first victory of the year. Norfolk is coming off two losses against the Florida Everblades this weekend.
Chad Boerth contributed to this article. You can follow Robbie and Chad’s coverage of the Orlando Solar Bears on Twitter @SinBinSolarBear.