After the second weekend of the season, the Solar Bears are the only ECHL team without a point, and Berehowsky is looking for answers. 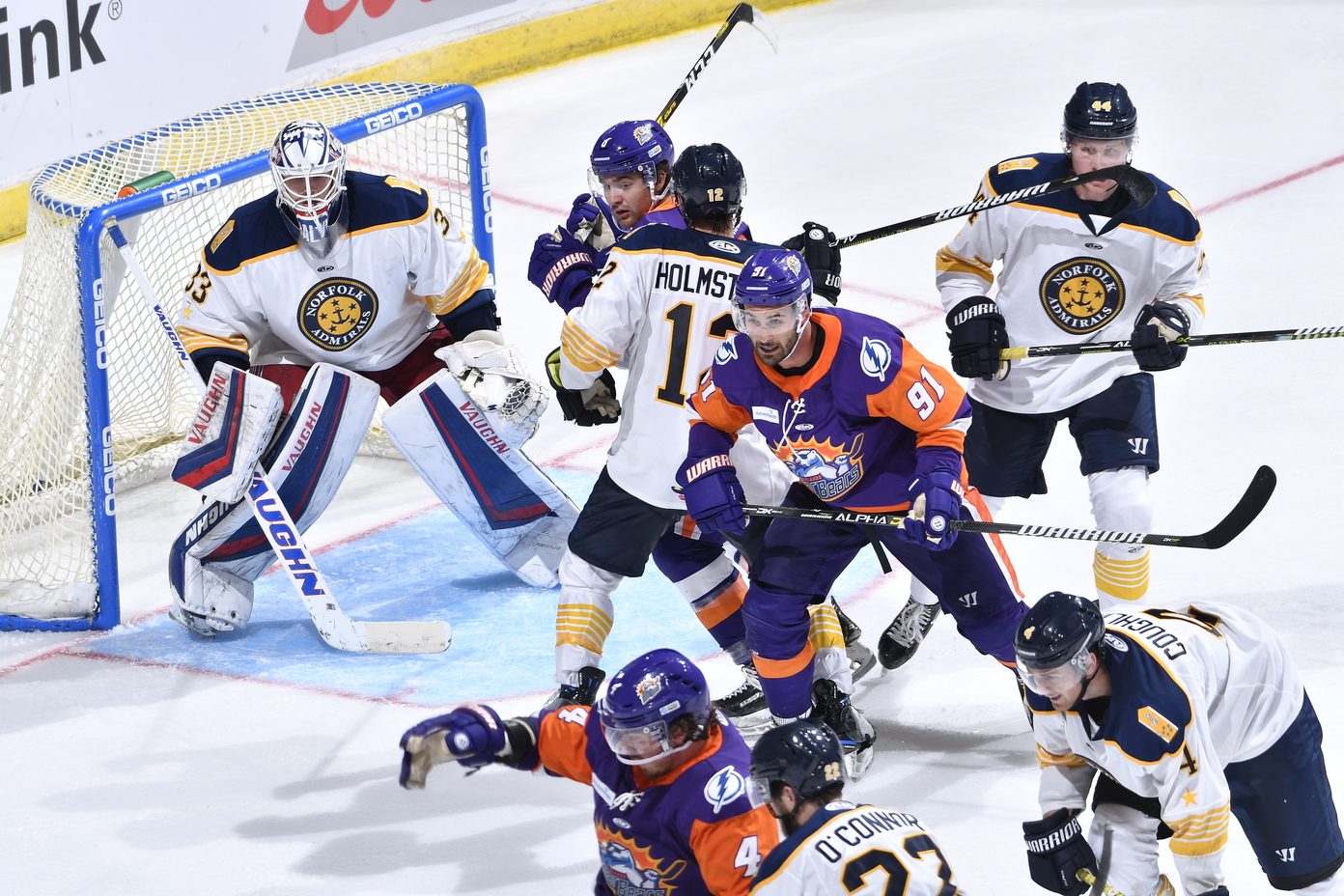 ORLANDO, Fla. – The Solar Bears’ head coach Drake Berehowsky hoped for a fast start to the year. He built a roster containing a number of players from last season, and he has a healthy dose of fresh talent coming from the Tampa Bay and San Jose organizations. After the second weekend of the season, however, the Solar Bears are the only ECHL team without a point, and Berehowsky is looking for answers.
The Solar Bears’ best opportunity for a breakthrough came on Friday night when they squared off against the Norfolk Admirals at Amway Center. Orlando put consistent pressure on the Admirals’ goalie Brandon Halverson. In the first two frames, the Solar Bears had doubled up the Admirals in the shots on goal category and had achieved a blistering 35-16 advantage in that area. The Admirals were taking a defensive posture, and the Solar Bears were playing with confidence.
Halverson, however, proved up to the challenge. He turned aside all 35 shots he faced through the opening periods, and his teammates provided him with enough offense to secure the win. The Solar Bears’ goalie Zach Fucale had a solid outing. He gave up one power-play goal, which came off the stick of Norfolk’s Christian Horn in the second period. And the Admirals’ Charlie O’Connor doubled that lead in the third frame when he squeaked a shot under the pad of Fucale.
Asked about his approach to the game after running up against a hot netminder, Berehowsky said,

“I always believe in staying the course. We just want to keep putting pucks on the net, and eventually something will fall. That’s what the guys did tonight. They just kept going and going. I’m proud of those guys, and on most nights, they will win those games.”

Orlando managed to mount a rally, with Chris LeBlanc tallying a power-play goal of his own thanks to a feed by Hunter Fejes. But with time dwindling, Orlando was forced to pull Fucale for an extra man, and Alex Rodriguez made the Solar Bears pay with an empty netter. Cody Donaghey pulled Orlando to within one in the final minute, but the Admirals were able to hold on for the win.
After Friday’s game, Orlando headed off on an overnight trip to North Charleston where they squared off against the South Carolina Stingrays on Saturday night. Early penalties quashed the Solar Bears’ hopes of getting off to a strong start.
Seven seconds into the game, Orlando was called for a delay of game, and a double minor high stick penalty meant that the Solar Bears played down a man for six of the opening ten minutes. South Carolina’s Mark Cooper struck with a power-play goal during that stretch. Orlando rookie Ryan Lohin equalized the score at the 15:27 mark. But one minute later, the Stingrays took the lead again thanks to the stick of Cameron Askew, and they never looked back, eventually putting together a string of three unanswered goals.
Fucale replaced goalie Spencer Martin after South Carolina’s third tally. Adding a symbolic underscore to the way the evening was going for the Solar Bears, Fucale had to leave the ice less than two minutes later due to a detached piece of his skate.
The Stingrays ended the night with a 4-2 win, and now the Solar Bears have to regroup to prepare for the undefeated Florida Everblades who will roll into the Amway Center on Friday night. This will be a big mental test for the Solar Bears, who have the talent and the game to compete. The question is whether the team leaders and Berehowsky can get the full squad to buy into the system and to maintain the intensity and discipline to dig, battle, and claw out its first points of the season.
Chad Boerth contributed to this article. You can follow Robbie and Chad’s coverage of the Orlando Solar Bears on Twitter @SinBinSolarBear. For the latest news across minor league hockey, “like” The Sin Bin on Facebook and follow @SinBinNews on Twitter.