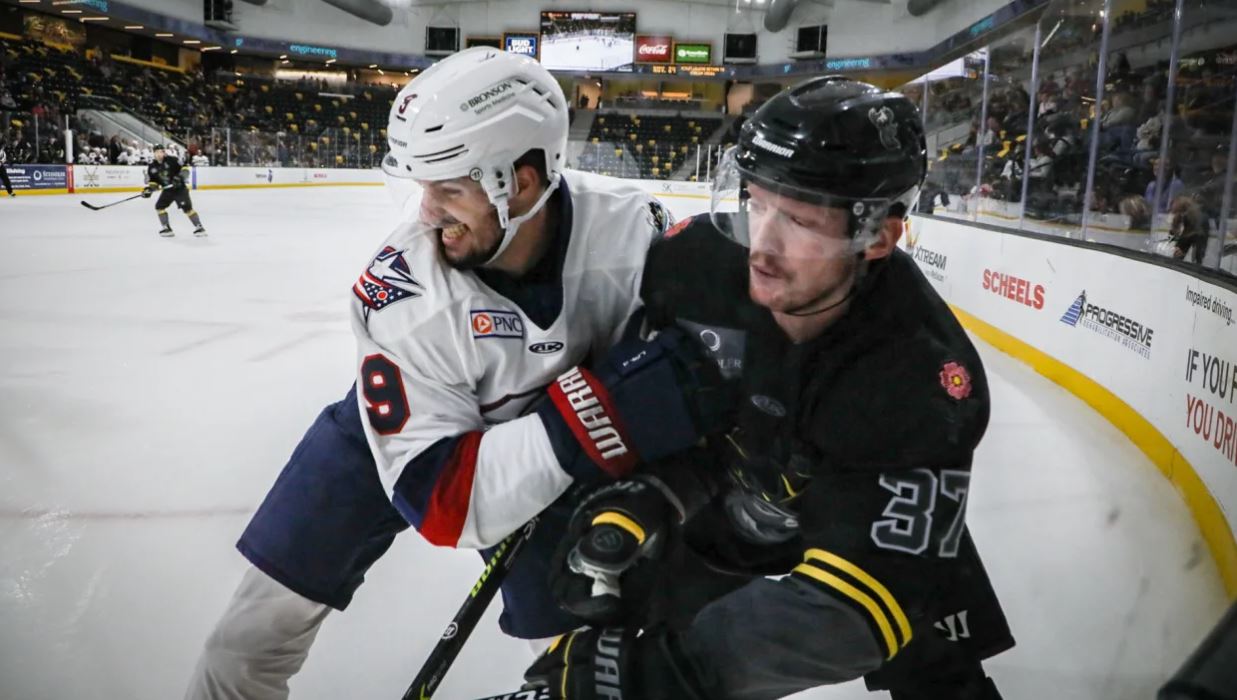 Five different players found the score sheet for Iowa. Kalamazoo was led by Miller who had a goal and an assist. Gorsuch stopped 36 of 38 shots.

CORALVILLE, Iowa – Tanner Sorenson scored 2:04 into overtime to give the Kalamazoo Wings a 3-2 victory over the Iowa Heartlanders on Sunday afternoon. The loss spoiled an outstanding performance by Hunter Jones, who stopped 41 of 44 shots. Kris Bennett scored his third goal in two games.

The Wings jumped out in front just past the five-minute mark of the first period. Brennan Miller stole the puck inside the Iowa zone, then fired a knuckling puck that beat Jones through traffic for his third goal of the season.

That one-goal lead held through the first break, as Kalamazoo outshot Iowa, 14-10 in the first period. However, at 2:25 of the second, Bennett tied the score with a power-play goal. Ryan Kuffner fired a shot that was knocked down in front of Wings goaltender Trevor Gorsuch. Bennett gained control of the puck, putting the backhander past the Kalamazoo goalie for his team-leading sixth goal of the year.

Kalamazoo retook the lead exactly two minutes later. Justin Taylor made a great no-look pass into the slot to Raymond Brice who blasted a one-timer by Jones to put the Wings back on top by a goal.

Kalamazoo held the one-goal lead for about six minutes, but the Heartlanders tied the score at 10:20. Joe Widmar passed the puck to Jake Linhart at this point, who moved into the right face-off circle before firing a blistering wrist shot that beat Gorsuch to tie the score at two.

This had been a wide-open contest throughout, as each team reached double digits in shots in each of the three periods. However, both Jones and Gorsuch dominated in the third period as neither team could find the back of the net. Kalamazoo had outshot Iowa 42-35 through regulation, but the score remained tied at two sending the game to an extra frame.

It did not take long, however, as Kalamazoo delivered the game-winner 2:04 into the extra session. A bad giveaway at the Heartlanders blue line gave Erik Bradford a 2-0n-0 break. He moved in before passing the puck across to Sorenson who tucked it just past Jones for the game-winner.

Five different players found the score sheet for Iowa. Kalamazoo was led by Miller who had a goal and an assist. Gorsuch stopped 36 of 38 shots.

The Heartlanders are off until Friday when they travel to Toledo to take on the Walleye for a pair of games. The puck drops at 6:15 Central time.