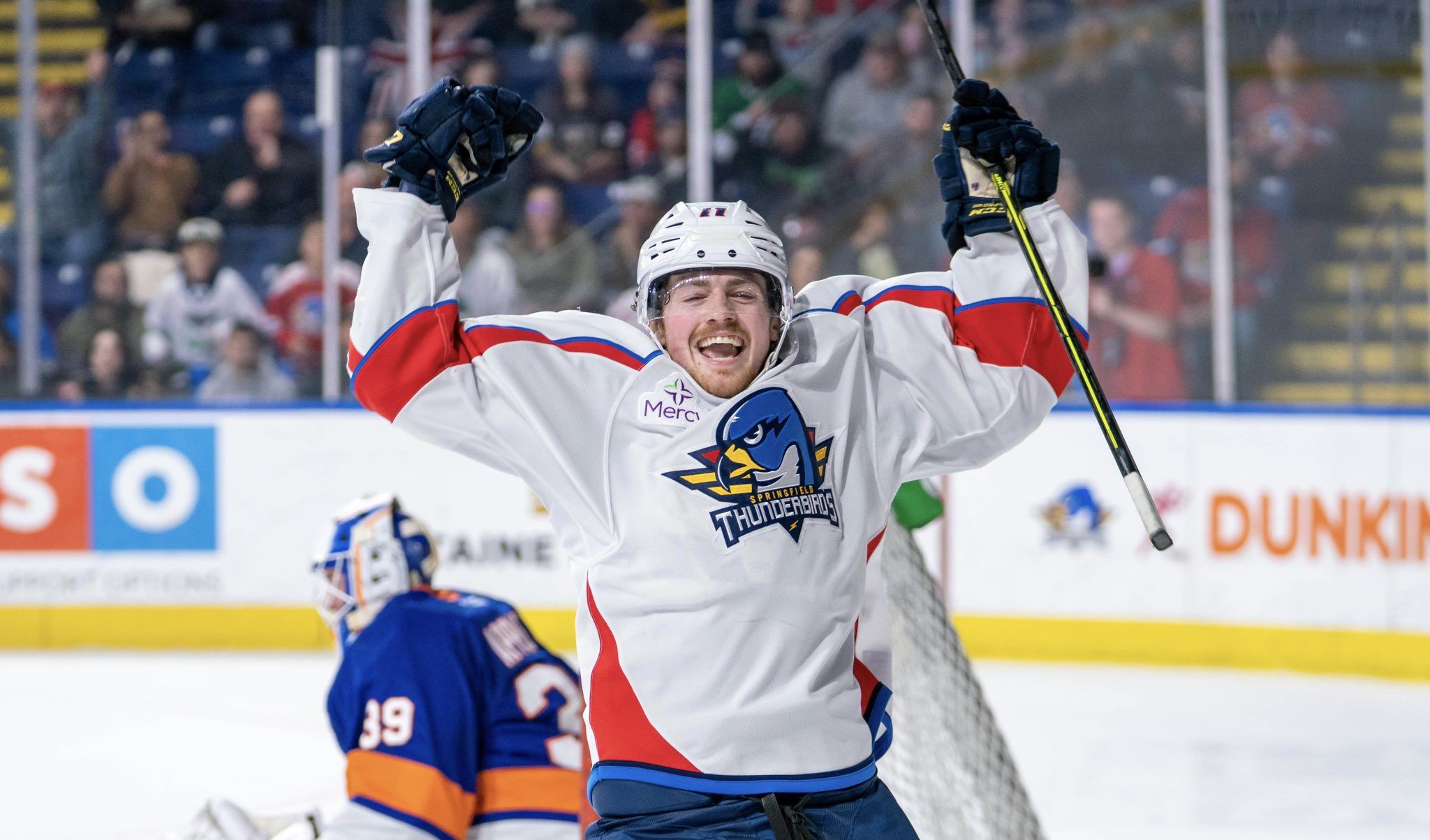 SPRINGFIELD, Mass. – Down two skaters for nearly two full minutes with less than five minutes to play on Friday against Bridgeport and leading by a goal, a strong penalty kill effort by the Springfield Thunderbirds combined with a 41-save effort from Vadim Zherenko lifted Springfield to a 6-3 decision. Ken Appleby had 28 saves in the loss as the Thunderbirds helped make the division standings very interesting going into the final day of 2022.

The Islanders opened up the scoring in impressive fashion as Cole Bardreau scored his seventh goal of the season, tallying a shorthanded goal by interrupting the Thunderbirds breakout and firing a shot on the blocker side that got past Zherenko to get the visitors on the board. Both teams had their fair share of opportunities on special teams, but the Islanders would be the only team to strike while down a man.

The Thunderbirds responded by scoring the next two goals to take a lead into the first intermission. Drew Callin got the party started for the home crowd by wrapping around the net with the puck and beating the poke check from the goaltender to even the count at one. Only three minutes later, Hugh McGing gave the home crowd of 6,793 a reason to get on its feet with a highlight-reel goal, taking a pass from Will Bitten and dancing through three Bridgeport defenders and beating Appleby with a slick pull-back to seize control of the game after twenty minutes.

Springfield extended their lead to 3-1 when Nikita Alexandrov joined the fun by potting a rebound from Austin Osmanski’s point shot. The helper is Osmanski’s first American Hockey League point in his 11th game over the last two seasons, jumping into the Thunderbirds’ lineup after spending most of the 2021-22 season with the Worcester Railers of the ECHL. The teams traded goals in the latter stages of the second when Arnaud Durandeau scored his sixth goal of the campaign after Chris Terry made a great play to block a clearing attempt and feed Durandeau. It was Terry’s 22nd assist of the season as he continues to be very productive for the Islanders.

Springfield responded with a brilliant shot by Jake Neighbours on the rush to make it 4-2. The Thunderbirds skated up quickly, almost in tandem like the “Flying V” from the old Mighty Ducks movies, and Neighbours has had a great shot of late. McGing registered an assist as nearly all of Springfield’s top scorers had multiple points in the game, including Matthew Highmore, Martin Frk, Bitten, and Neighbours.

The turning point of the game was in the late stages of the third period. After Otto Koivula cut the Springfield lead to just one goal with a power play marker, the Islanders threatened to tie the game with a pair of penalties separated by 17 seconds. Although the Thunderbirds had allowed two power play goals in the game over five opportunities, the penalties they killed in the third were the major difference-maker in the game as the T-Birds killed it off and tallied two empty net goals to seal their 13th win of the campaign by a 6-3 final.

The win helps to set the stage for an interesting last day of games in the Atlantic Division in the calendar year of 2022. The Islanders lost their seventh straight game, and although they remain in third place, the two points bring the Thunderbirds into a three-way tie for fifth place and only three points away from catching the Islanders. Bridgeport has just one win in their last ten games, and they’ll do some scoreboard-watching on Saturday as they’re idle until the calendar flips. Springfield faces off against the Hartford Wolf Pack with a chance to move up in the standings with two points.