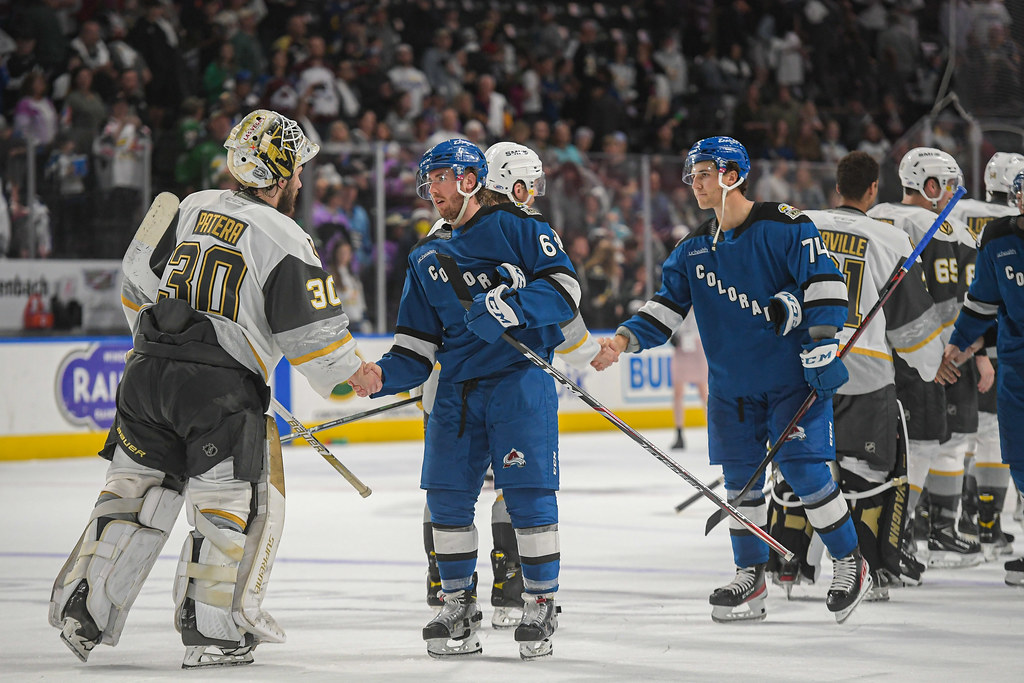 LOVELAND, Colo. – Friday night marked Game 2 of the first-round series in the Pacific Division bracket between the 3rd seed Colorado Eagles and the 6th seed Henderson Silver Knights. With Colorado taking Game 1 in this best-of-three series, a win on Friday would see them advancing into the second round. Henderson, meanwhile, was playing to extend their season at least one more game.

No changes in net: Henderson would be sticking with Jiri Patera, who had an excellent Game 1. At the same time, Colorado would remain with the victorious Justus Annunen to guard the crease.

In an intense, penalty-filled affair, the special teams would shine through for Colorado en route to a 5-2 win and a clean 2-0 sweep over Henderson to advance to the second round.

The story of the first was penalties. Two minutes into the game, Henderson’s Ben Jones and Colorado’s Jordan Gross and Jean-Luc Foudy were already in the box for minor penalties. Henderson tried to take advantage of the extra open ice to strike early, with two big chances from Jonas Rondbjerg that Annunen would turn aside rather calmly. Colorado, sticking to their offensive game plan from Game 1, and one that carried them all season, countered at the other end. Alex Beaucage took the puck behind the net and threaded a pass to Stefan Matteau in the slot for a one-timer that beat Patera and put the Eagles up 1-0 just over 8 minutes into this one.

The penalties continued to pile out. Following the successful kill of a Mikhail Maltsev minor penalty, the Eagles saw themselves on a two-man advantage with Brayden Pachal sitting and Rondbjerg serving a tripping penalty, with Patera taking down an attacking Eagle. With all their talent and the open space provided, Colorado wasn’t going to be kept out of the net despite Patera’s best work. The cycling puck movement eventually found Martin Kaut at the side of the net, who deposited the puck into the empty cage to double up the Eagles’ lead to 2-0.

Martin Kaut connects from a wide angle on the power play for the Colorado insurance goal. However, during the goal celebration, Mikhail Maltsev took an unsportsmanlike conduct penalty, giving us some 4-on-4 hockey.

The penalty minutes had only just begun with matching minors given to Pavel Dorofeyev and Andreas Englund for exchanging some heated words and a couple of slashes at one another. The tensions continued to rise. At the end of the period, it was Pachal getting into it with Dylan Sikura. Both players were also given matching minors for roughing. When the dust settled on the first, both teams had a combined 24 minutes of penalties.

It took over six minutes for the Silver Knights to respond, but their effort to play a more focused game and keep the emotions in check eventually paid off. Alan Quine’s vision allowed him to find Dorofeyev left all alone at the side of the net in a defensive breakdown for the Eagles. Dorofeyev got the puck over Annunen’s stretching glove to cut the Colorado lead in half to 2-1.

Henderson is on the board after some solid work from a crucial offensive zone faceoff.

Pavel Dorofeyev settles down a bouncing puck from Alan Quine and sends it home past Jiri Patera.

On the next shift, Kiefer Sherwood came flying down the wing on a 2-on-1 and fired a shot that looked to beat Patera at first glance. Upon video review, the puck entered from the side of the netting and got tangled up in the twine, resulting in no goal. In terms of penalties, the only infraction in this one concerned Colorado putting six skaters on the ice and them back on the penalty kill. Just as they had done all series, the Eagles used the extra ice and the Silver Knights’ aggressive setup to counterattack shorthanded, but the shorthanded chances from Ryan Wagner and Maltsev on two different rushes were stopped by Patera.

Patera and Annunen remained perfect through the rest of the middle frame, leading to a one-goal game heading into the third.

The Eagles came out flying to put this one away in the final period of regulation. Their effort and tenacity on the puck forced a Silver Knights penalty, and it was Beaucage getting a slick backhand feed from the zone entry by Sherwood. Beaucage let a laser of a shot go from the right faceoff dot that beat Patera short side to extend the lead to 3-1 and send the home fans wild with jubilation.

Beaucage came coasting in along the half-wall before letting off a floating shot past Patera's low glove side.

The Eagles kept up the pressure, and with traffic in front, Foudy let a shot go that found its way through the screen and Patera’s five-hole for the 4-1 lead with 9:10 left in the third.

What an impressive individual effort by Jean-Luc Foudy. Dances away from pressure, dekes out two defenders, and sails the puck past Patera.

The tension continued to build in this one, with Dorofeyev going after a loose puck with a few shots to Annunen that the Eagles took exception to – namely Englund and both were once again sent off for coincidental minors. However, Henderson had one last gasp coming from their end. At the 14:22 mark, Layton Ahac took the puck on the left-wing and, with a perfect screen set up in front of Annunen, had no chance on the shot going far side to bring the Silver Knights within two goals.

With the intensity ramping up, Englund wasn’t done yet. He lined up Gage Quinney in the open ice and laid a massive, high hit that led to a huge scrum with the powder keg finally exploding in this one. When it was all said and done, Kaeden Korczak was given 2 minutes for roughing in response to the hit, and Englund was given a match penalty for a hit to Quinney’s head. Both players were also assessed 10 minutes for continuing the altercation as the emotions were running high on both sides.

Once the dust settled, there was still 2:39 remaining, with Henderson only down by 2 and on the man advantage. The Silver Knights decided to pull Patera for the two-man advantage but that opened up the opportunity for Wagner to throw the puck down the ice 200 feet and into the empty net. That iced this one at 5-2, which held up as the final score in this one.

Annunen made 34 saves in the series-clinching victory, while Patera stopped 29 of 33 shots.

With their sweep of the San Diego Gulls, the Ontario Reign are locked in for a showdown with the Eagles. The best-of-five series begins Wednesday, May 11 at 7:05 PM MST. They will play two games in Colorado before playing the next 3 (if necessary) in Ontario.