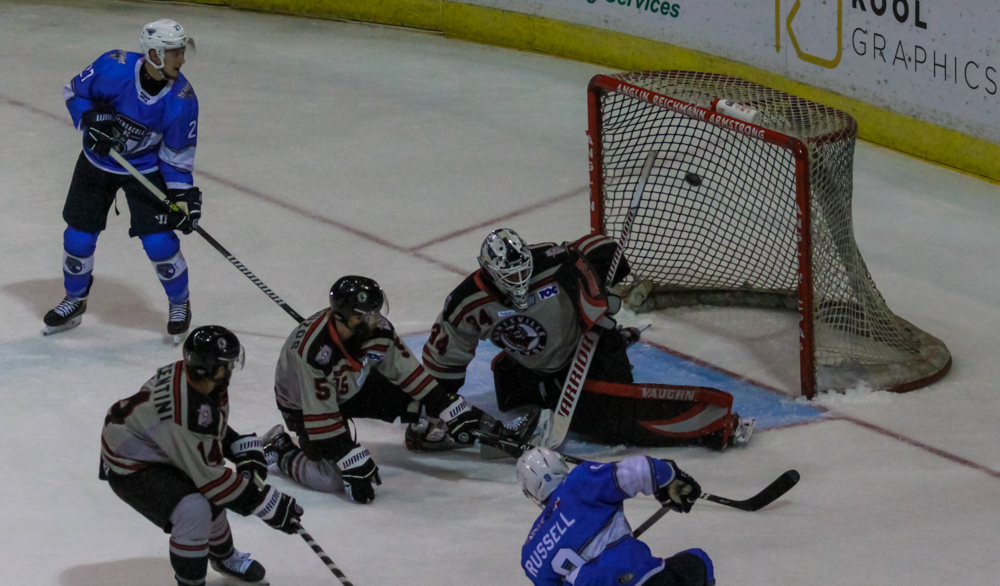 MACON, Ga. – Thanksgiving week is nearly upon us if you’re close to where teams in the SPHL call home. As the week continues, including the march toward turkey, dressing and pumpkin pie on Thursday or other times this week, here’s a glance around the league in SPHL Takeaways.

The first month or so of the season has been marked by multiple trends. One of them? Streaks.

First, you have the standard-bearers for success in the recent postseason across the SPHL, the Huntsville Havoc.

“Over there in Huntsville,” as the Drive By Truckers would say, the Havoc have already made history, and it’s not even time for Thanksgiving turkey yet.

A 12-0 start by the Havoc earned them a spot in the history books for the best start to a season in league history. But there’s a certain magic to winning so many games in a row, at some point, the smallest thing can make a difference, and that’s what happened a night after that 12-0 start as Peoria got one of its biggest wins of the year in topping Huntsville 1-0.

But the Havoc haven’t been to only team to go on a big early-season run.

Like Huntsville, Quad City also started last weekend on a streak, getting a Friday win in Pensacola to extend its winning streak to ten games. An overtime loss on Saturday to the Ice Flyers ended the win streak, but not the run of 12 games with at least a point.

With two big streaks, the question, of course, is raised. Which one is more impressive?

One factor to account for is the strength of schedule. The Storm had a pair of impressive wins in taking down Peoria, but being able to play one of the two worst teams in the league, Vermilion County does help to make a schedule easier.

As for the Havoc, it’s worth noting that their 12-0 road trip involved a grueling road trip to Roanoke and the luxury of only playing one of the league’s two worst teams, Macon, just once.

The bottom line is this. That for a team like Huntsville that has a high standard of success, this is the start that the Havoc needed. For a Quad City team that has not experienced success, it’s just what the doctor ordered not just for the organization, but for its efforts to further entice fans back to the arena after not seeing live hockey for all of last year.

Now, the Havoc and Storm may be getting a lot of spotlight for their start, and it is well deserved, but there’s another team up north not named Peoria that continues to make the jockeying in the standings fun. That team is Evansville. As the weekend approaches, the Thunderbolts are 8-5-0 with 16 points, good for fifth in the standings, a spot helped by winning six out of seven games to begin the season.

One thing to watch? How the ‘Bolts handle life on the road. This weekend’s game on Friday and Saturday in Macon will be Evansville’s first road games at an arena outside the state of Illinois, so one thing to keep an eye on will be how the Thunderbolts play, even against a struggling Macon team, especially on Friday night.

It’s the nature of the SPHL season. You can have a great two-goalie tandem until you don’t. Injuries and ECHL call-ups can certainly test the depth of the goalie spots on a roster. This month alone, Birmingham’s Austin Lotz and Pensacola’s Sean Bonar have departed their teams for the ECHL, although Lotz has since returned.

It’s a prime example of why goalie depth is key, and why, as Huntsville saw first-hand in being shut out Saturday, why the key to the Rivermen’s success defensive may be not only Eric Levine, but Jack Berry, as well. Levine has played as expected so far, leading the league with a .946 save percentage, but Berry has also started strong with two goals allowed in two games.

If both stay healthy, Peoria has a strong case for the league’s best goalie tandem.

Divide building between Mayhem. Bobcats and rest of league

A divide is forming in the SPHL standings, and that’s not a good thing for Macon and Vermilion County.

While the Bobcats did earn the first point in franchise history on Saturday against Knoxville, the fact still remains that both are, for lack of a better phrase, trying to find their way. If the season ended today, both would miss the postseason by eight points, a margin certain to grow if they are unable to win a few games here and there.

The key for both is to find positives and build on them. The Bobcats can do that after gaining a point last weekend. For the Mayhem, the need to put together a full game has been magnified in its past three losses, all to Fayetteville. Each game saw Macon give up three first-period goals. The obvious first step to winning a few games for the Mayhem? Find a way to start games better.

James Hayes takes a look at the Bulls early-season struggles

Don’t forget to download the Field Pass Hockey app to live broadcasts in the SPHL, ECHL and AHL!