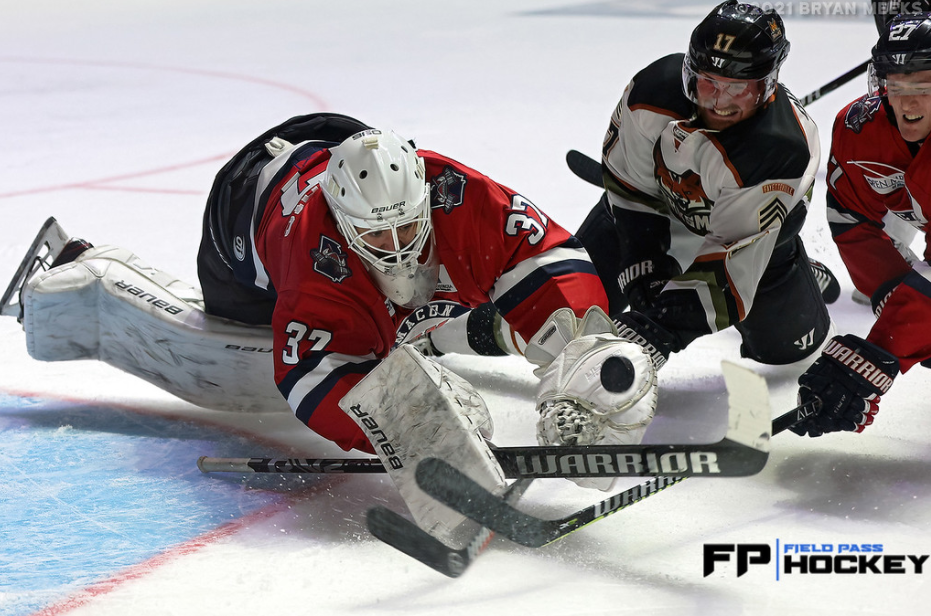 MACON, Ga. – A couple of weeks now into the SPHL season, separation is starting to shake out. Some teams are doing their best to pull away from the pack with others being in tightly contested fights in the middle of the standings with others still trying to find their footing. Here’s a handful of storylines going into this weekend in the SPHL.

If there’s one thing that recent weeks have taught us, it’s this. That the days of Peoria have a fairly easy time with its nearby foes in the SPHL may be over. Last Friday, Quad City opened the weekend with a 2-1 win against Peoria, getting 31 saves on 32 shots from Bailey Brkin. It came a weekend after Evansville took a 3-1 win at the Ford Center.

It’s a far cry from what we saw in 2018-19, the last full SPHL season prior to COVID-19. That year, Peoria went 40-7-11, winning all but once against Evansville and falling to the Storm three times that season.

In hockey, like most things, half the battle is mental. And as the season goes on, the fact that both the Storm and Thunderbolts have claimed an early win says this, that the three-way fight between Peoria, Evansville, and Quad City could be very fun to watch,

Storming toward the top

As the weekend arrives, the Quad City Storm finds itself in second place, just three points behind Huntsville. Sure, the Storm is aided by the fact that four of their first seven games to begin the season were against Vermilion County, but they have also beaten Evansville and Peoria.

So why the early success? One reason is the play of veterans. Joe Sova’s playing for his fifth different SPHL team, having been in the league since 2016-17. He leads all defensemen in the league in points with nine. It’s a similar case on the forward lines, as this is the fourth SPHL team for Marcus Ortiz, and the physical veteran is seventh in the league and second on the team in scoring with seven points. Ahead of him is Shane Bennett, the Storm’s current leading scorer on his fourth SPHL team since 2017.

Having veteran leadership is a key cog in helping a team with a mixture of players mesh, and the Storm appears to have that.

Special teams matter, and they matter more for the Ice Bears

If there’s a special team’s edge in the SPHL, Knoxville appears to have it, and that factor has helped the Ice Bears win all but two of their games this season so far. Knoxville has the distinction of allowing no power-play goals so far this season, turning the opposition away all 17 times. The Ice Bears have been good on the man advantage, too, being third in the league in scoring on 27 percent of their power-play opportunities.

The way that a team can take advantage of a power play or ensure the opposition does not can play a significant role in a game’s momentum. It’s an edge that Knoxville is currently enjoying.

Is there a correlation between the volume of shots taken and given up and wins and losses? Recent stats and the SPHL standings indicate that it is the case. As this weekend arrives, Birmingham is eighth in the standings, Macon is 10th and Vermilion County is 11th.

Not only have these three teams taken the fewest shots on goal, but they also have faced the most shots, as well. The Mayhem have taken 27.5 shots per game, the Bulls 25.9, and the Bobcats 21.7, nearly half of 43 shots per game taken by Quad City, which leads the SPHL in that category. While Fayetteville is allowing just 25.1 shots per game, Vermilion County is giving up nearly twice that at 49, just behind Birmingham’s 39.9 and Macon’s 38.3.

Bobcats get the home-ice feeling

As far as an on-ice win, last weekend was anything but for Vermilion County with a 5-0 loss to Evansville and 8-1 setback to Quad City. But in the big picture, the weekend was even bigger than at the David S. Palmer Arena.

After opening weekend against Peoria was postponed, this was the team’s first home weekend, and the fact that the Bobcats were able to give their fans a much-awaited home-ice environment in close to full capacity in the arena is a huge building block as the franchise moves ahead. Sure, seeing a win or two would be an added bonus, but there’s nothing quite like a team’s first time on home ice, the Vermilion County fans got that last weekend.

Inside The SPHL Podcast: Russell Jordan

As always, you can catch multiple game broadcasts by downloading the FieldPass Hockey App on Google Play or the Apple Store!