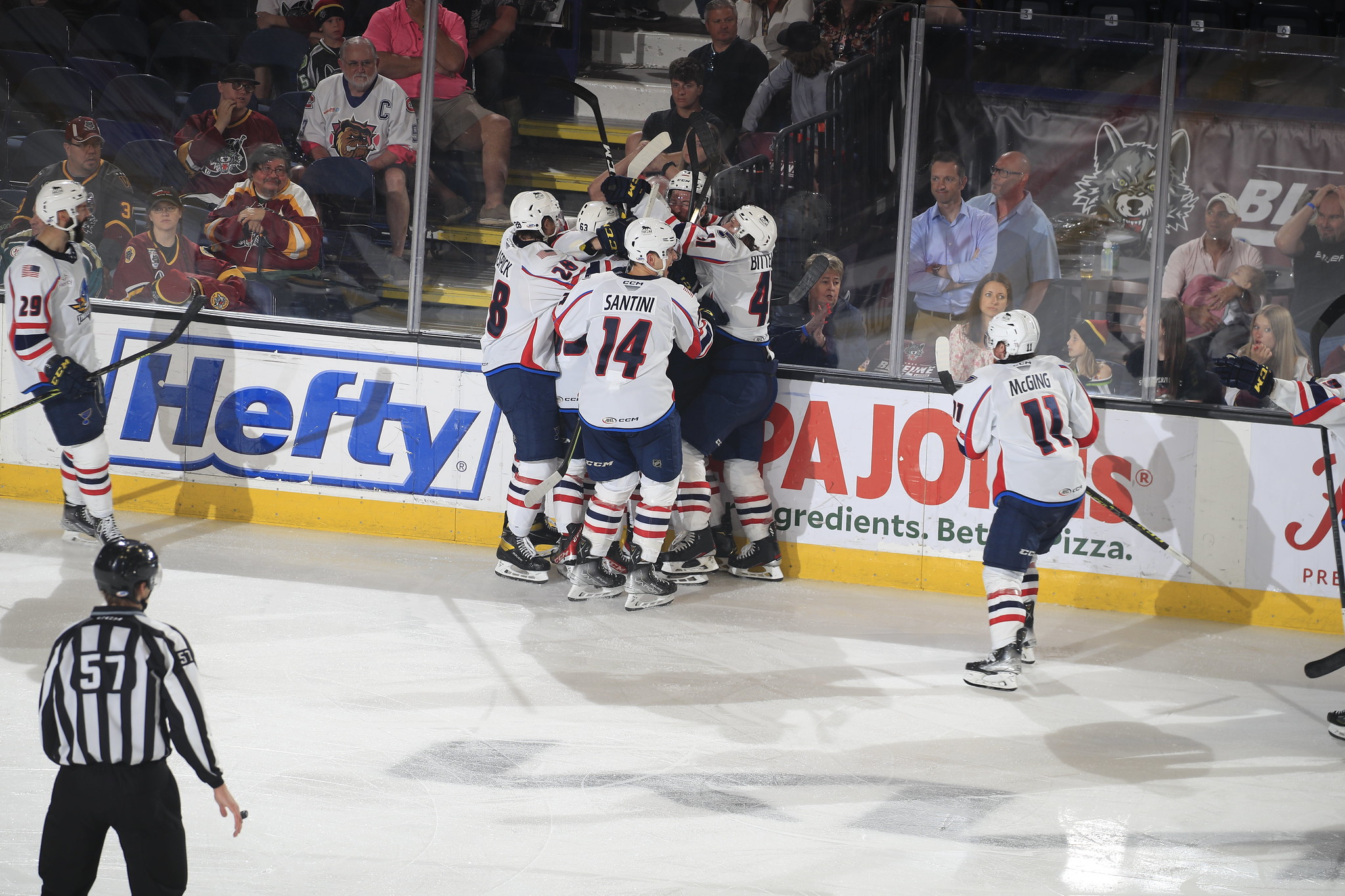 ROSEMONT, Ill. – Game 1 of this Calder Cup Finals had finally arrived on Sunday afternoon – the first of its kind since 2019. An aura of anticipation surrounded Allstate Arena as the Chicago Wolves and Springfield Thunderbirds readied themselves for battle. Two deep, high-flying rosters lined up for the billing of the year’s main event that was sure not to disappoint.

In net, the rotation of goalies on both sides saw their veterans getting the start in Game 1 – Alex Lyon led the way for the Wolves while Charlie Lindgren got the crease for the Thunderbirds. Springfield had the intent of starting strong on the road as they had all playoff long, while Chicago looked to set the pace at home, where they were undefeated in the postseason leading into Sunday.

However, past records don’t matter with a new series, as the Thunderbirds scored three straight goals in the third period and OT to ride to a 5-4 victory and a 1-0 lead in the Calder Cup Finals.

After a couple of strong opening shifts from the Thunderbirds, including a power play chance, the Wolves would be the first to strike on their own power play. With James Neal sitting in the box for boarding, Chicago went to work. After nearly a minute of zone time to wear down Springfield’s defenders, Andrew Poturalski threaded the needle to Jack Drury, who wired a shot past Lindgren, off the bar and in to set off the home crowd in celebration and put the Wolves up 1-0.

Poturalski on the dish, Jack Drury with the finish pic.twitter.com/1Y1f5cMpUS

For the Wolves, however, their bad habits with trips to the box continued to bite them in this one. Richard Panik took his second minor of the period and the Thunderbirds would cash in just four minutes after Drury’s marker. A Calle Rosen shot from the point wasn’t handled by Lyon and Hugh McGing was able to deposit the rebound in without harassment to tie the game 1-1.

McGing's tally on the power play ties this one up pic.twitter.com/eiAfufkAcp

With 2:44 to play, Chicago had another power play with a chance to take the lead back at the end of the period. However, despite the zone time and chances it was Springfield going the other way as soon as the penalty expired and Brady Lyle working a give-and-go with Matthew Peca, who beat Lyon with just 35 seconds left in the period for the huge momentum swing for the visitors as they went into intermission up 2-1.

Once again in this frame, discipline would be an issue for the Wolves. Three more minor penalties in the second alone, including a hooking call that wiped out what would have been a power play advantage on the very same shift. Despite these rhythm-breaking calls, the Wolves remained stout in their penalty killing.

Just thirty seconds after killing off Poturalski’s minor at 5:39 of the period, Panik made amends for his first period penalty troubles. The veteran forward cut to the middle and roofed a backhand shot past Lindgren to tie the game at 2-2.

17 seconds later the Wolves struck again – this time it was David Gust throwing a shot on net from the half wall that caught Lindgren by surprise to give Chicago the lead at 3-2.

…and Gust squeaks one in to take the lead! pic.twitter.com/keQCPckcA5

The period ended with another boarding call against Springfield to give the Wolves runover power play time, and as Neal and Wolves head coach Ryan Warsofsky exchanged words heading off the ice, the stage was set for an incredible third period of hockey in this opening game.

The Wolves used that clean sheet of ice and on the power play would cash in for their second man advantage goal of the night. Josh Leivo would rip a shot from the point, and Stefan Noesen would fly by the slot to redirect it past Lindgren and extend the Wolves’ lead to 4-2.

#StefNation on the power play extends the Wolves' lead pic.twitter.com/y7MpM2hSKK

The two-goal lead would last all of 24 seconds. On the other end of the ice, Tommy Cross‘ seeing eye shot made it through traffic and Lyon never picked it up. Cross pulled the Thunderbirds within one again and all of the energy in Allstate Arena after Noesen’s goal was immediately sucked out with that quick response.

Cross' seeing-eye shot beats Lyon, who doesn't pick it up until it's behind him pic.twitter.com/LPHFZVhduv

For the rest of the third period, the Wolves did something that they have rarely done all season long – play tentatively with the lead. A team that loves to push on the attack when up a goal suddenly didn’t test Lindgren much, and found themselves in their own zone simply trying to clear pucks to kill clock. It almost worked.

Springfield had other plans though. With Lindgren pulled, the equalizer once again came from a seeing-eye shot on a whiffed clear by the Wolves. Lyle’s booming shot tied the game up with just 1:28 to play, and all of the momentum was firmly in Springfield’s hand, especially as Joey Keane lifted the puck over the glass right after the next faceoff to – once again – put the Wolves on the penalty kill.

Lyle's shot makes it through traffic and ties Game One with less than 2 minutes to go pic.twitter.com/mDi4tYR8D0

While Chicago did manage to push it to overtime tied at 4-4, the ice was firmly tilted to the Thunderbirds heading into the extra frame.

While failing to convert on the carry over power play, Springfield put heavy chances on Lyon; the best one coming from Neal dragging the puck across the front of the crease that Lyon had to aggressively step up on and fight off. The Wolves couldn’t generate much going the other way, and on the counter Neal would attack the zone and feed the trailing Matthew Kessel. Kessel would beat Lyon for his first professional goal standing up as the game winning goal in Game 1, completing the thrilling comeback to put the Thunderbirds up 1-0 in this series.

After Neal draws the defenders to him, Kessel steps in and buries it for Chicago's first loss at home this postseason pic.twitter.com/rQYDB56f3I

Game 2 takes place Monday, June 20th at Allstate Arena before the series shifts to Springfield for a three game set.