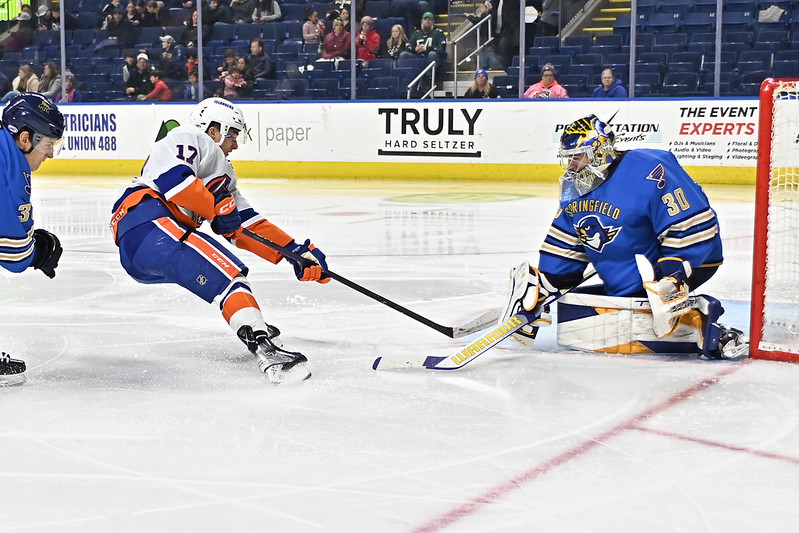 The Springfield Thunderbirds got back in the win column, snapping a five-game losing streak Sunday

BRIDGEPORT, Conn. – The Springfield Thunderbirds got back in the win column, snapping a five-game losing streak Sunday, with a 3-1 win over the Bridgeport Islanders. The Thunderbirds got goals from Matthew Highmore and Greg Printz, while Joel Hofer stood tall in net with 33 saves. On the other side, Jakub Skarek suffered the loss in goal, making 16 saves. The win pulls Springfield to within two games of .500 as the team looks to get back into range of the sixth spot in the Atlantic Division.

The Thunderbirds broke through with Highmore’s fifth goal of the season on the power play to open the scoring. Highmore, the leading scorer in the Atlantic, went to the net and took a pass from Nikita Alexandrov at the top of the crease to beat the outstretched Skarek to get the goal.

It’d take until the third period for the red light to come on again, as Printz nabbed his third goal of the season on a nifty move streaking into the attacking zone. With Drew Callin appearing to take a high stick from Dennis Cholowski in the neutral zone, Printz took the puck and flew past everyone for a much-needed insurance marker for the Thunderbirds.

Bridgeport made it interesting late with a goal from Samuel Bolduc in the final minute of action, but ultimately fell short of the comeback as Alexandrov scored an empty-net goal with a second to spare.

Hofer did his share to earn the win for Springfield, facing shot counts in double digits in each of the three periods of action. Springfield’s top goaltender has flown under the radar a bit with the team’s struggles, currently in a tie for seventh in goals against average, allowing 2.45 per game.

Bridgeport has a formidable offense as a large reason why they’re among the American Hockey League’s top teams, with the second-highest goal total at 79. It takes talent to limit their chances and keep players like Chris Terry off the board, as the team’s high-caliber offense has come through many times over the last few months.

Springfield gets back into action when they host the Grand Rapids Griffins in a collision of unusual opponents on Friday, while the Islanders are inactive until they host the Hershey Bears on Friday to kick off a set of three games in as many nights.

The two teams have two more matchups on the calendar this month, including a matchup on New Year’s Eve.