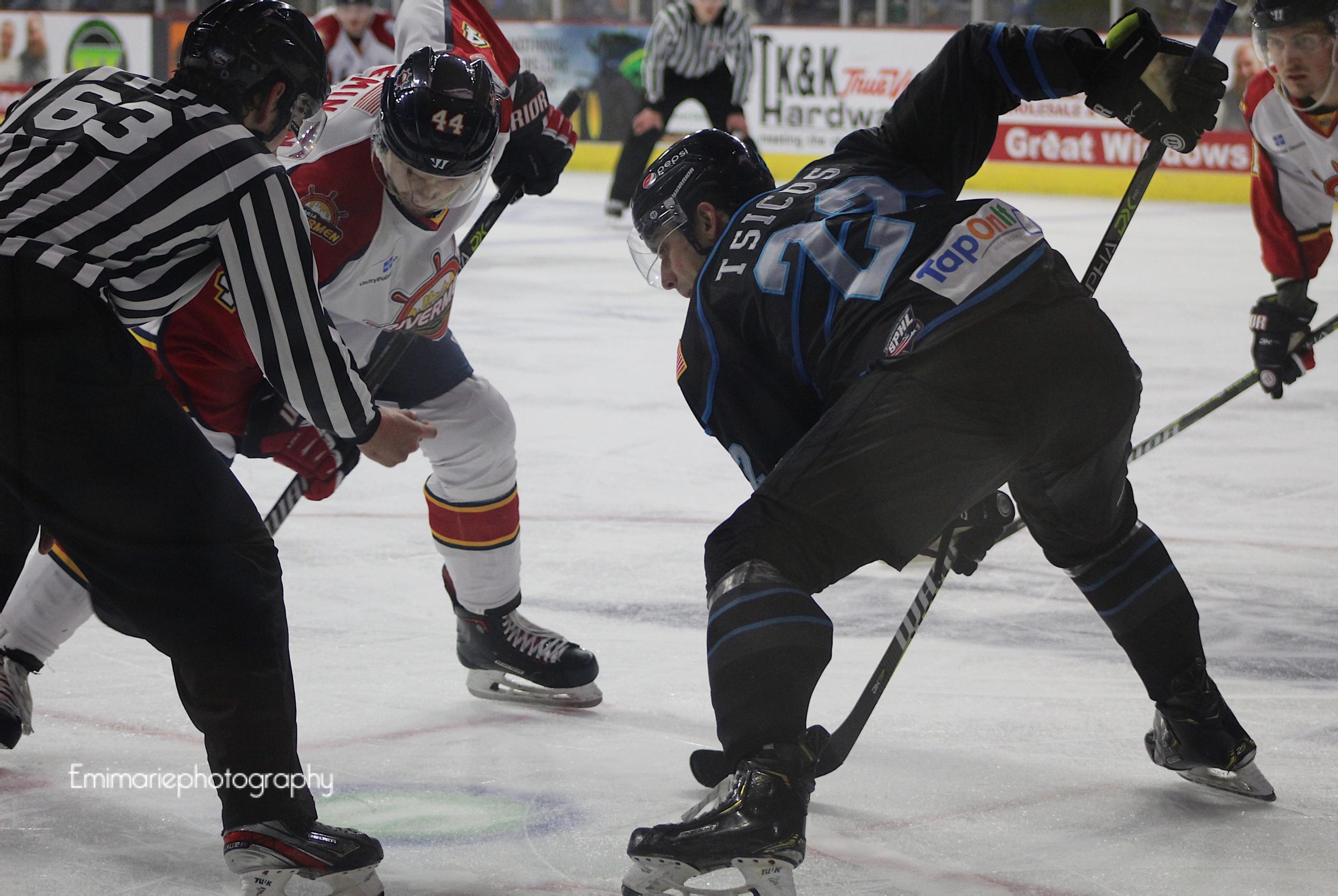 MOLINE, Ill. – The Quad City Storm and Peoria Rivermen squared off in two more battles of the Cold War on 74 this weekend, engaging in another set of home-and-home games.

MOLINE, Ill. – The Quad City Storm and Peoria Rivermen squared off in two more battles of the Cold War on 74 this weekend, engaging in another set of home-and-home games. A very special visitor was in attendance for both games, as the Holy Grail of Hockey — the Stanley Cup — was doing a tour of Illinois. The weekend was a split, but it gave three points to each team.

The Storm earned their first win of the season against Peoria on Friday, and only their third win in regulation against the team. The Moline-based team’s fourth victory against Peoria came in the inaugural home opener in overtime off a penalty shot goal. The in-state rivals battled for the Cold War on 74 Traveling Cup last season, though it was hardly a close war, as Peoria won 13 of the 16 contests last year between the teams. It can’t be said each match-up hasn’t been hard fought, however, as the teams racked up quite a few penalties and suspensions from extracurriculars. This season’s regulation victory is especially sweet for Quad City, as it comes just one game after breaking their nine-game losing skid.

“Well I mean, third period obviously we’re a better team when it comes down there. it would’ve been nice to carry the lead before that, but a win’s a win. At this point, during that streak, I thought there were times we should’ve won, and you’re in a slump and you kind of don’t get the bounces,” said Head Coach Dave Pszenyczny on Friday.

The Storm had to battle back in the third period both Friday and Saturday, forcing overtime on Saturday. While going down early before a comeback isn’t the best strategy, the fact that the team had two comebacks in two nights — one slightly more successful than the other — speaks to the determination and grit of the team after the aforementioned losing skid.
Quad City also showed discipline through the weekend, taking fewer penalties against their rival. The Rivermen were one for nine on the power play through the weekend series, while Quad City was one for eight. The Storm are ranked last in the league for penalty kill at 77.46%. The less penalties they take, the better off they’ll be with those numbers (though they are in the middle of the pack for times short-handed).

The Storm’s power play unit has some work to do, as they are ninth in the league for converting but third in times with the man advantage. The Storm had a five-minute power play to take advantage of to start Friday’s game, but were unable to beat Peoria goaltender Dillon Kelley even with sustained pressure in the zone.
Quad City seemed unable to give a full game of effort, coming out slow for the first period more often than not. This of course leads to the other team taking the lead early, as evidenced by both Friday and Saturday’s game sheet. The effort is apparent in latter periods, but some holes can’t be dug out of.

As mentioned before, the Storm doesn’t start games with as much energy as they exhibit later on. It’s a sixty minute game, however, and so the outcome is never decided by only one frame (excepting overtime, of course).
With rivals who have seen each other so much, it’s fair to expect a certain amount of physicality. While the two teams didn’t drop the gloves this weekend, there were plenty of kerfuffles after whistles that almost led to fights if not for officials breaking it up. Those kerfuffles were always preceded by hard hits, which is an improvement for the Storm, who have at some points chosen complete skill over force.
The Storm will have a three game homestand starting December 27 when they will host the Evansville Thunderbolts both Friday and Saturday. After the Christmas break, it will begin the most important part of the season, according to Assistant Coach Jake Toporowski.

“Coming out of break, it’s just going to be who outworks the other team. That’s something we have to come prepared. We’re going to get into town, come home from break, skate in the morning, and that night we gotta be ready to Put the break behind us and focus on the back half of the year. Back half of the year is a lot more important, and we have to get every point we can going in to the stretch.”

Be sure to follow @SinBinStorm on Twitter for the latest news and updates about the Quad City Storm. Don’t forget to give a “like” to The Sin Bin on Facebook for all additional SPHL, ECHL, and AHL minor league hockey news coverage!