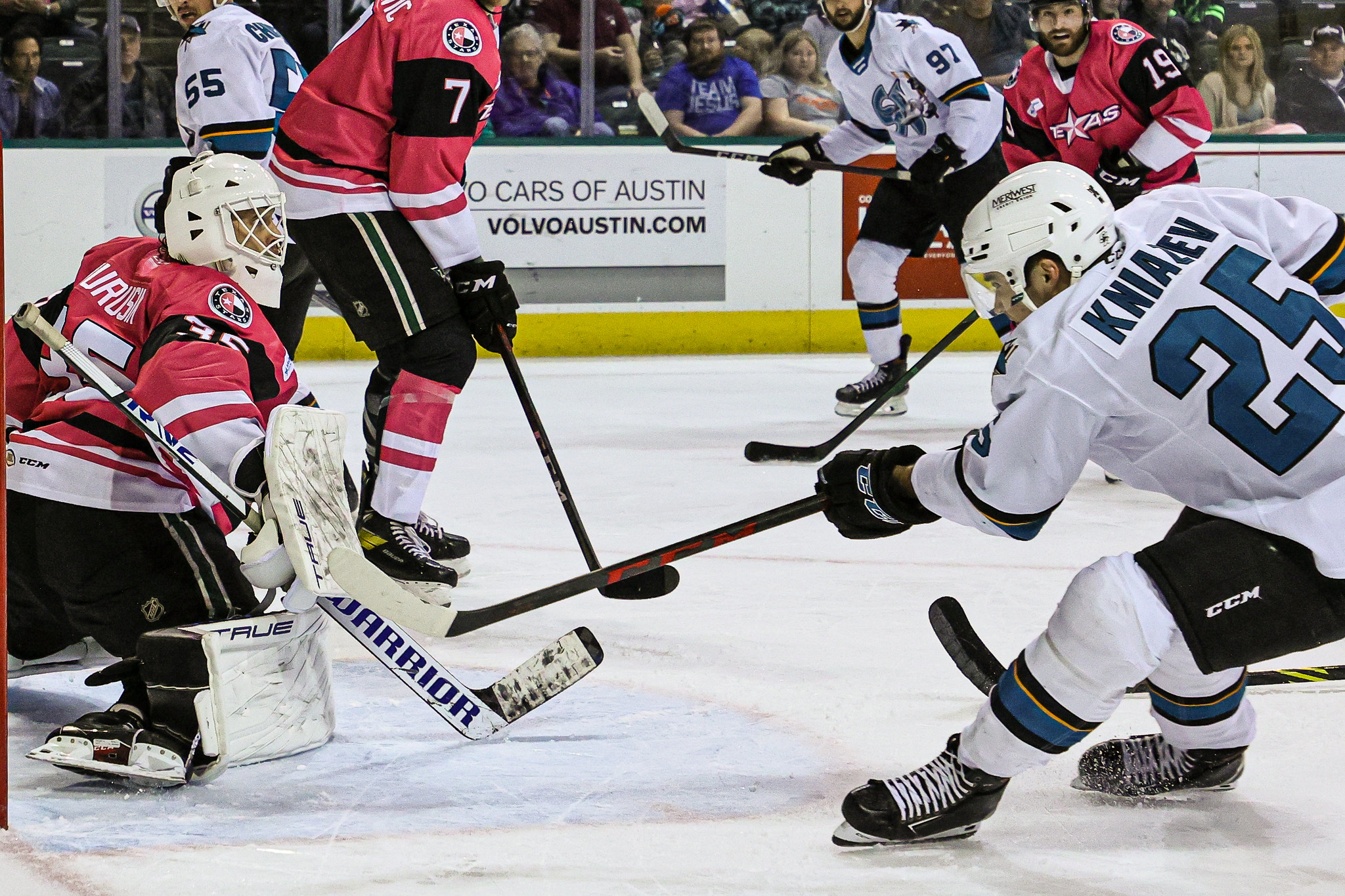 Stars Close Out Homestand with Win

Without four of their top-nine forwards, the Stars stepped up big and released an onslaught of shots on goal, and walked away with a nice win

Stars Close Out Homestand with Win

CEDAR PARK, Texas – The Stars concluded their eight-game homestand and their two-game series against the San Jose Barracuda Sunday afternoon at the H-E-B Center. Without four of their top-nine forwards, the Stars stepped up big and released an onslaught of shots on goal, and walked away with a nice 4-1 win.

Sunday’s game was a quick turnaround from Saturday’s thrilling 7-6 shootout loss. The fatigue showed early on as the Stars were outshot in the first ten minutes 9-3. Luckily, Matt Jurusik was a brick wall and stopped everything that came his way. At least he did until less than a minute into the second period, San Jose’s Nick Merkley opened the scoring with a wrist shot past Jurusik’s glove.

In response, the Stars would outshoot San Jose 17-3 in the second period. The game would get knotted up at 1-1 with just under four minutes left in the period when Jeremy Gregoire scored his second goal in as many games.

With the game tied heading into the third period, the Stars had a two-to-one shot advantage, the Stars had to feel encouraged with their play up to that point.

During the final twenty minutes, the Stars would continue to throw pucks on net. Just after a San Jose penalty was killed, Joel L’Esperance stayed red hot, scoring his 16th goal of the season. He was left all alone in the high slot and teed up a massive slapshot that rippled the back of the net with ferocity.

Now holding the lead, the strategy turned to shutting down San Jose’s offense and keeping control of the puck. It worked to perfection and San Jose was forced to pull their goaltender Zach Emond with a minute and change to play. Ty Dellandrea took a shot at the empty net from just beyond center ice and missed. He would follow his rebound and before he could put the puck in the net, he was taken down from behind and went head-first into the net. Dellandrea was down for a couple of minutes and was able to skate to the bench for the rest of the game.

After the ensuing fights and penalties, the Stars hit the empty net once again. This time, it was Jerad Rosburg putting it out of reach for good.

The Stars played their best game of their homestand on Sunday. Without Damiani, Caamano, Melnick, and Louis, we were able to see a squad rejuvenated adopting a more physical approach to the game. In turn, the number of shots on goal was the highest they have been all season in Austin and marks three straight games with 30 or more shots on net. A good start to finding the solution to the scoring woes that have plagued this team all season.

The goaltending for both teams was stellar. Jurusik stopped 27 of 28 and Emond stopped 38 of 40. Emond was responsible for keeping San Jose in this game as long as they were. On the other end, Jurusik continued to impress in his short time here in Texas. He came on in relief of Scheel on Saturday and was credited with the loss. Sunday, well that was a different story. He was sturdy and proved the contract he signed with the team in December was a wise decision.

At the end of the game, Dellandrea took a nasty spill into the net and was down for a few minutes. Something that has not been talked about enough this season is his toughness. There have been multiple instances where Dellandrea has taken a nasty boarding penalty, a hard hit in open ice, and been taken down very aggressively. He’s been the one bringing the energy every night for this squad and always seems to leave his mark on the game in some fashion. Not to mention, he has flashed his elite skill here and there and is consistently making high-level plays coming out of the defensive zone and in the offensive end. He looks ready for a shot at the national league next season. So long as he isn’t injured, the Stars have a solid chance at victory night in and night out.

The Stars will take to the road for the next two weeks before returning home. They’ll play their next home game on Tuesday, March 8th against the Charlotte Checkers. That is the opener of a two-game set that is being made up from New Year’s Eve and Day.