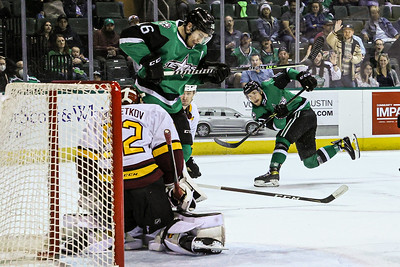 CEDAR PARK, Texas — The Stars continued their three-game series against the Chicago Wolves Friday night. Coming off a solid 3-2 win on Wednesday, the Stars had the opportunity to claim a series win against the division leaders. Despite jumping out to an early lead, the Stars fell to the Wolves 4-3.

The Stars started out with a near-identical performance to Wednesday’s first period in Friday’s first frame. The first few minutes served as a feeling-out process, with Chicago’s lineup getting a boost with the team-leading scorer Andrew Poturalski entering the fray. Despite that injection of offense, the Stars jumped out to a quick 2-0 lead courtesy of the power play. With the Wolves committing two penalties in rapid succession, the Stars went to the 5-on-3. In the first 20 seconds of the two-man advantage, Joel L’Esperance opened the scoring for the second straight game. During the remaining power play time, Tanner Kero tipped home a pass from L’Esperance to extend the lead. Just as the Stars started to settle in, the Wolves answered right back. Chris Bigras tallied his first goal in a Chicago Wolves sweater on a sneaky shot that beat Matt Murray’s five-hole.

The second period was a different story. The Wolves came out on a mission and wasted very little time before knotting it up at two. It was Ivan Lodnia beating Murray to give the Wolves the equalizer. After the tying goal, the Wolves were on the hunt, not satisfied with their effort thus far. The Stars were able to hunker down and weather the storm, but the Wolves were dominant. Just over five minutes into the period, the Wolves held a 6-0 shot advantage. The answer? Tighten up defensively and hope for the best. That strategy served well as the Stars maintained the 2-2 game into the intermission.

In the third, the Wolves didn’t let up. Early on, Lodnia netted his second goal of the game on a mad scramble around the net. The fight back was not there for Texas until late in the period when Fredrik Karlstrom made it happen. Another huge goal from the Swedish rookie, whose 5-on-5 numbers are startling for someone with his level of experience. With life, the Stars continued to push for the win. Unfortunately for them, the Wolves offense was too much to overcome. A late goal from Spencer Smallman put the Wolves in front and they never looked back.

The Stars slipped into some bad habits on Friday, but the push back and near comeback was something not seen as much early in the season. While blowing a multi-goal lead is far from ideal, the Wolves have one of the top offenses in the league and it shined through. At one point on Friday, the Stars held control of the final playoff spot in the Central, but failing to secure a point saw them cede that advantage to the Wild who have one game in hand.

With just five games remaining in the season and only one on home ice, the odds are not in the Stars’ favor. After they close out their series against Chicago on Saturday night they will head north to take on Iowa twice, Manitoba, and Milwaukee.