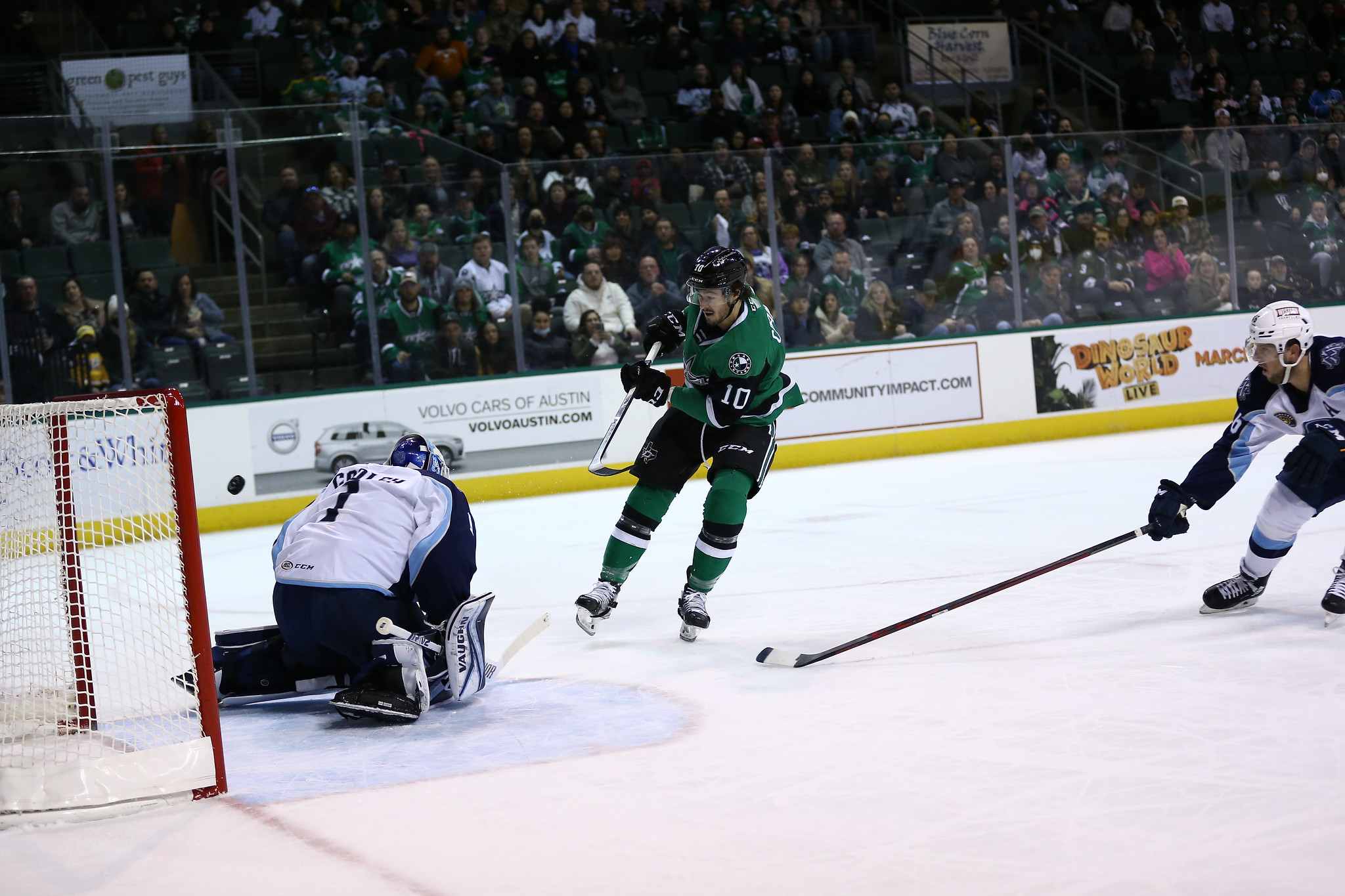 After failing to register a point in the standings on Friday, they looked to Saturday as an opportunity to earn a split with the Milwaukee Admirals.

CEDAR PARK, Texas – The Texas Stars closed out the latest of their home series against the central division Saturday night. After failing to register a point in the standings on Friday, they looked to Saturday as an opportunity to earn a split with the Milwaukee Admirals. Unfortunately for the Stars, penalties and a couple of breakdowns would spell their demise in a 5-3 loss.

The Stars have gotten in the habit of taking early leads during the current homestand. That trend continued with a goal from Fredrik Karlstrom. A decisive shot from Karlstrom off a nice dish from Jordan Kawaguchi put the Stars in a favorable position. That didn’t last long as Matt Luff capitalized on a Jeremy Gregoire penalty to tie it up. Just a few minutes later, the Stars were shorthanded again. This time, Oskar Back dove to knock the puck out of the Milwaukee zone and it was a racing Nick Caamano who was able to beat the goalie and retake the lead. The Stars would head into the intermission with a lead and some power-play time left on the clock. This was an opportunity to have a decisive victory.

The second period started with the Stars failing to score on the power play. Just 4:30 into the period, Graham Knott tied it up. Not long after, Milwaukee Captain Cole Schneider scored on a wicked redirection. It was a shot from the wing aimed wide that Schneider got his stick on and buried. Fans called for a high-stick but were left dissatisfied with the decision to not review the goal. Now down in a game they led, the Stars were reeling and needed a change of momentum. They would not get it. Instead, Riley Damiani would take a hooking call just ten seconds into a four-on-four and his visual displeasure with the call would send him to the locker room for the rest of the period. During the four-on-three, Milwaukee scored to take a two-goal lead.

Halfway through the period, the Stars had not registered a shot on goal. That changed. The Stars came out with heavy pressure after falling behind by two, but were unable to break through the Admirals’ defense. They would head into the second intermission searching for answers.

Coming out in the third, the Stars came out throwing everything at the net. They finally cracked into the Admirals’ lead when Dawson Barteaux netted a beauty. It came off an Anthony Louis sharp-angle shot that dribbled to the stick of Barteaux, who was patient and put it on his backhand before rattling the top of the cage. Now, with life, the Stars needed to continue to put pressure on the Admirals. Unfortunately for them, the Admirals tightened up and started to press in the Stars’ end. With time winding down, the Stars prepared to pull Matt Jurusik for the extra attacker. At least that was the plan until a puck dumped into the Stars end was played outside the trapezoid by Jurusik, resulting in a delay of game penalty. The Stars were able to kill the Jurusik minor, but were unable to score during the six-on-five time. Before it was all said and done, Rocco Grimaldi hit the empty net for his second of the game and sealed the deal.

In the recap for the series opener between Milwaukee and Texas, I said the Stars had an issue with discipline and how lapses in discipline have cost this team at critical times. This narrative was reinforced in the second period via the Damiani minor and misconduct penalties. With Milwaukee utilizing the four-on-three power play, the Stars fell behind by two goals with what was the eventual game-winning goal by Grimaldi. The hooking call may not have been the most egregious penalty, but nevertheless, he was called for it and his actions lead him to miss the rest of the period. Damiani is one of the top offensive players for the Stars, so his presence is highly valued. His minor is not the only instance of a backbreaking penalty. Just the night before, a call against Rhett Gardner gave way to a Milwaukee goal that would prove to be the game-winner. If the Stars clean it up, there’s no doubt things will go their way a little bit more often.

Time for some positives.

First, with an assist on the opening goal, Jordan Kawaguchi has ended a lengthy home-scoring drought. That’s huge for someone who, before the season, was seen as a top-six forward. He’s bounced in and out of the lineup over the last few weeks and has finally gotten himself on the scoresheet. Second, the Stars scored their third shorthanded goal at home this season and showed this team can be dangerous in any situation. Lastly, the defense has been responsible for driving offense from the back end the last couple of games. They’ve been more than competent in that facet of the game and continue to keep their offense energized in the attacking zone.

The Stars will look to collect some wins in the coming week when they host the Grand Rapids Griffins on Tuesday and Wednesday before hosting the San Jose Barracuda on Friday and Saturday. They will have an opportunity to stockpile some points as they continue to try and climb up the central division.