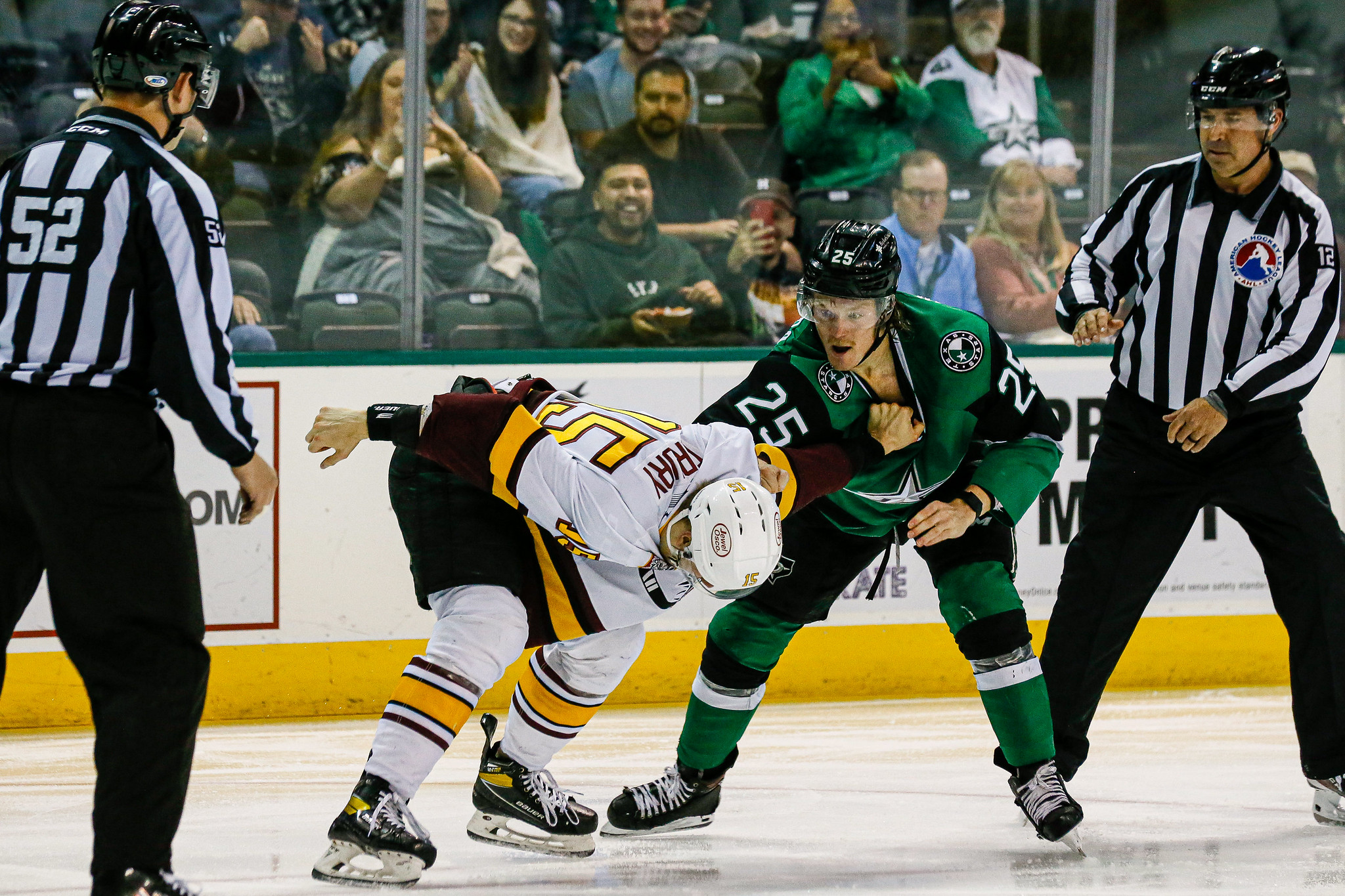 CEDAR PARK, Texas – The Texas Stars took to the ice Wednesday night to face the Central Division-leading Chicago Wolves. After a disappointing weekend series against the Iowa Wild that saw the Stars fall out of a playoff spot, their desperation and intensity was cranked to eleven. In a raucous, bone-rattling slugfest, the Stars walked off home ice with a 3-2 win and two huge points in the standings.

The sense of desperation became apparent as soon as the puck dropped. A high-flying, physical matchup started with back-and-forth runs and thunderous hits into the boards. Scrums after every whistle turned into fistfights at the H-E-B Center this season. Unexpectedly among those fighting were Ty Dellandrea and Jack Drury: two guys known for their offensive prowess and not their ability to punch someone in the face dropped the mitts just 90 seconds into the match. Coming out of that fight, Drury received an extra two minutes for high-sticking, leading to a Stars power play. On said power play, Joel L’Esperance rifled a shot over the blocker of Pyotr Kochetkov to give the Stars the early edge. Just a few minutes later, the Stars chipped the puck into the Wolves’ end, and on what was an innocent-looking play, Ryan Shea wired a wraparound pass right to the stick of a falling Riley Damiani to make it 2-0 Stars.

Before the first period concluded, the vaunted Chicago offense struck on the power play. It was the AHL goal-scoring leader on the year, Stefan Noesen, notching his 41st goal of the year. Going into the break up 2-1, the job was far from finished. It took until midway through the second period for the Stars to re-establish their two-goal lead. Fredrik Karlstrom buried the Stars’ third goal of the evening off a rebound from a Josh Melnick shot on goal. With the two-goal lead intact, all that the Stars needed was to shut down the Wolves for another 30 minutes. That’s a tall task, but the Stars needed no extra motivation.

Moments before the second-period horn blew, Jesper Sellgren threw the puck to the high slot, and it ricocheted off the leg of Ryan Suzuki and in. An awkward goal with no chance of being saved put the Wolves back within striking distance. After the Suzuki goal, the Wolves would commit penalty after penalty, nixing much of their offensive momentum and giving the Stars the opportunity to regain the two-goal lead for the third time in the game. Thanks to some good penalty killing, the Wolves maintained their one-goal deficit till the bitter end. With Kochetkov pulled for the extra skater, the Wolves pressed in the Stars’ end. Each time the Wolves got set up, the Stars fought for the clear. By the time the final horn blew, the Stars had staved off one of the most potent offensive attacks in the AHL and earned a huge win as their playoff push continues.

Wednesday night was a demonstration of what Texas Stars hockey is all about. The physicality and the defense were on point. These elements of their game were able to shine through thanks to the early goal scoring from L’Esperance and Damiani. Most notable is the way the Stars held tight to their lead and did not falter. Too many times this season, we have seen the Stars relinquish leads late and sacrifice points due to small errors. Wednesday, the Stars beat their drum to a different tune.

With the win over Chicago, the Stars have now taken the edge in points over Iowa. Iowa has one game in hand on the Stars, but the pressure is on the Wild now to collect points where they can. The Stars have six games remaining in the season, and it will be a massive challenge for them to win games. All six games left are against playoff teams as it currently stands, with one game being a head-to-head with Iowa.

The playoffs are right around the corner, and the Stars are fighting for their lives. They’ll get two more cracks at Chicago this weekend before taking off for the season’s final four games up north. We’ll know very soon if the Stars will play for the Calder Cup this season or if they’ll have to wait until the fall to right the wrongs.