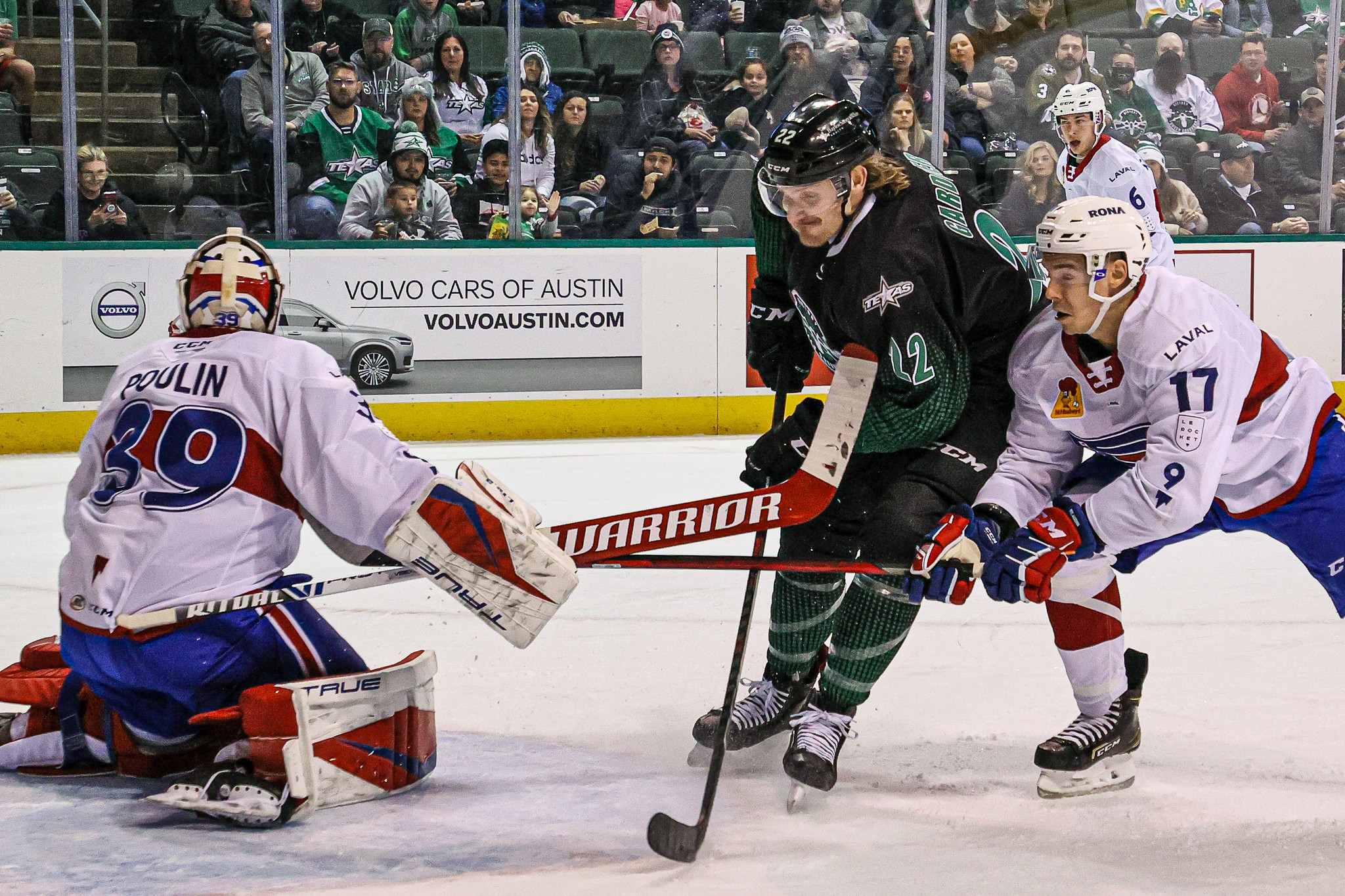 Stars Extend Point Streak to Six in Rout of Rocket

Stars Extend Point Streak to Six in Rout of Rocket

CEDAR PARK, Texas — The Stars concluded their three-week hiatus from home on Friday night with a statement. After falling behind after the first period, the Stars scored six unanswered to extend their point streak to six games as they aim to get back into the Western Conference playoff race.

An opening onslaught by the Stars revealed the M.O. for the team on Friday night, and that was to throw bodies through the glass and pucks on net. Despite no success, the Stars set the tone and looked sharp early. Counter to the game’s flow, Laval scored their lone goal on a shot from the point. Tory Dello broke the ice with a shot deflected off a Stars’ skate and in. Laval maintained their narrow lead into the intermission and held control of the shot column.

Coming out of the first intermission, the Stars got a couple of early power plays and capitalized on both. The first came on a nifty display of puck handling by Joel L’Esperance, who banked one in off a defender’s skate after dangling through three Rocket players. The second came on an Anthony Louis goal not even ten seconds into the man advantage. Louis was not done, however. Just a few minutes later, Louis netted his second of the game and gave the Stars some breathing room. Before the second period closed, the Stars added another goal on a slippery play where Jeremy Gregoire slid it through the wickets and in. A great end to an excellent period for the Stars sent them into the final 20 minutes with a three-goal lead.

In the third period, the Stars picked up right where they left off when Nick Caamano utilized a power move to break towards the crease and tucked one in. Ty Dellandrea flashed some of his high-end skill with a nasty toe drag move around his defender to put the final exclamation mark on this one. After beating his man, he danced around the goaltender to cap off a beautiful sequence and the game. The Stars managed to salt away the remaining time with no danger of their lead being diminished and went on to a 6-1 win.

This game was the most complete game the Stars have played at home this season. Despite falling behind early, Texas managed to stick to its identity and flash some of its talent en route to a massive win. With big games from Louis and L’Esperance, and several others chipping in, the Stars look rejuvenated as they head into the playoff push. A six-game point streak and a couple of big wins this week have the Stars making moves up the standings.

While many look at the chances of the Stars making the playoffs as zero, they have managed to string together an impressive stretch to give them life, and with several games in hand on most teams in front of them, the opportunity is there for the Stars to close the gap. It’ll be an entertaining second half of the season, and the Stars will look to keep their streak going on Saturday night, where they will square off with Laval at 7 p.m.