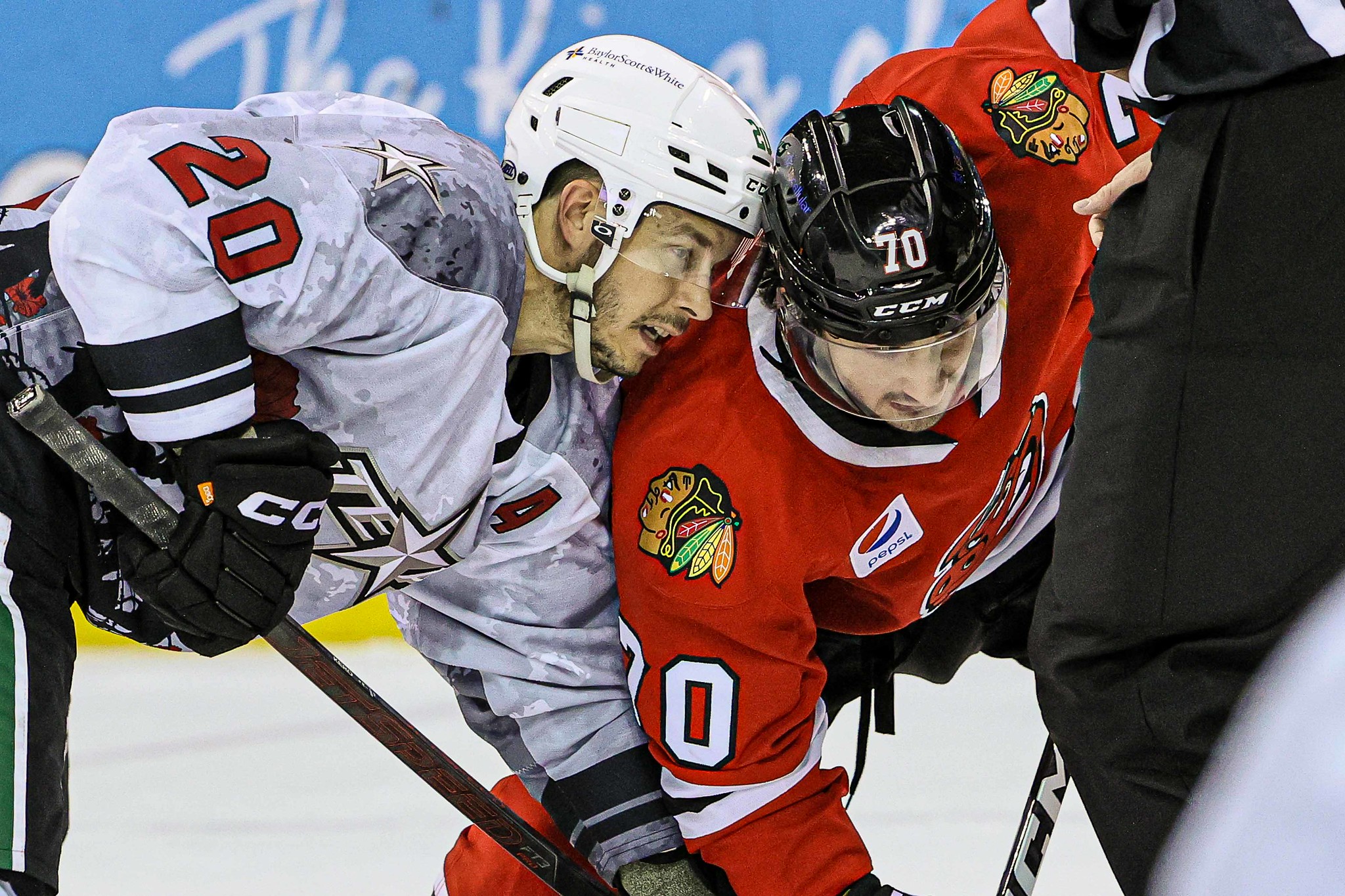 CEDAR PARK, Texas – The Stars aimed for their first series sweep on home ice this season. After a solid 3-2 win on Saturday, the Stars came out sluggish and dropped the second half of their back-to-back series with the Rockford IceHogs, 5-4.

Similar to Saturday’s game, the Stars fell behind early thanks to an iron-rattling goal from David Gust just a minute into the game. It didn’t take long for a response when Tanner Kero dipped the shoulder to get around his defender and into the crease. While gliding towards the net, Kero snuck the puck five-hole to tie it up. Rockford responded with intense pressure in the Stars zone. They were rewarded quickly, when Gust tapped in a juicy rebound to restore the IceHogs lead. They’d ride that lead into the intermission despite giving up a couple of power plays.

Coming out of the break, the Stars answered right back. Kero made it happen all his own with a nifty toe drag around his defender followed by a quick shot into the top corner. They weren’t done yet. Less than a minute later, Riley Tufte tipped home a point shot to give the Stars the edge. An emphatic response by a team playing their 4th game in 7 days. Despite their best efforts, the Stars conceded the tying goal before the period was out. It was Bobby Lynch on the receiving end of a high-arching lob pass out of the Rockford zone and he made no mistake, beating Matt Murray to tie the game. To add insult to injury, Isaak Phillips blasted a slap shot from the point to give Rockford their third lead of the game in the final minute of the period.

In the third, the Stars capitalized on an early power play where Riley Damiani skated to the middle of the ice and fired one off the post and in. Though looking destined for overtime, Damiani was called for high-sticking in the final five minutes. On the ensuing power play, Luke Philp snuck a wrist shot past Murray to make it 5-4. Rockford held on to the lead to the final horn, denying the Stars their first series sweep at the H-E-B Center.

It seems that the tight schedule started to affect the Stars even more in Sunday’s loss. Despite head coach Neil Graham stating Saturday that the team didn’t come out slow, it appears the storyline changed on Sunday.

The hallmark of this Stars team is their defense and goaltending. In Sunday’s loss, the Stars allowed 38 shots and were uncharacteristically undisciplined. Not being tight on defense and taking penalties is the sign of a tired team. That’s to be expected with the amount of hockey this team played in the past week.

With a full work week between their next game, the Stars will have ample time to get rested and correct some errors in play. They’ll need to take advantage of that time as they will be hosting the Manitoba Moose, a team sitting around the top of the division early in the season. They’ll open their weekend series on Friday night at 7 p.m. where they will aim to inch closer to that top spot in the Central division.