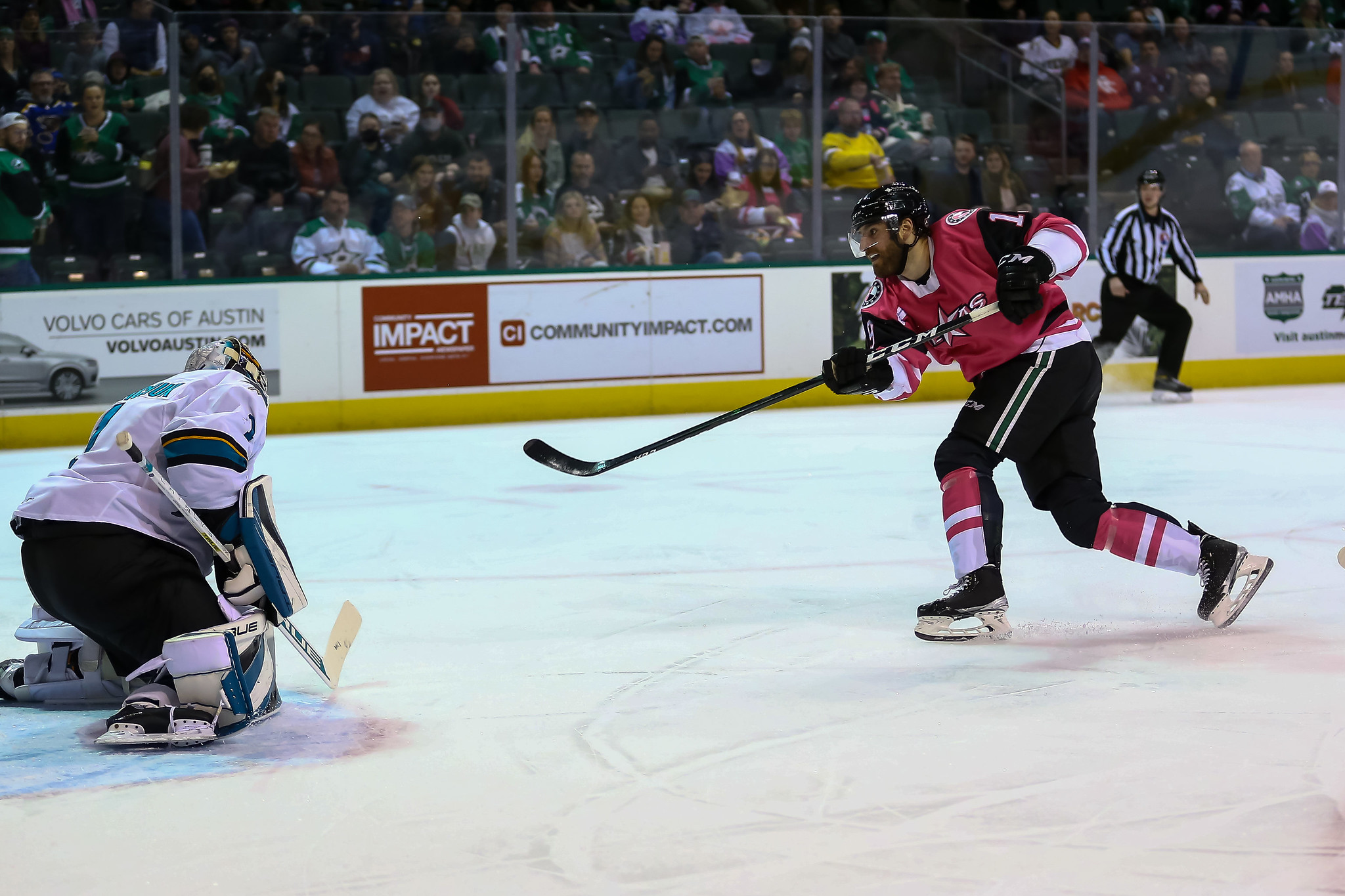 The Stars opened the final series of their eight-game homestand Saturday night when they welcomed the San Jose Barracuda to the H-E-B Center.

CEDAR PARK, Texas – The Stars opened the final series of their eight-game homestand Saturday night when they welcomed the San Jose Barracuda to the H-E-B Center. After collapsing in the second period, the Stars would mount a furious comeback to snag a point in the standings.

The storyline of Saturday’s game was scoring. It didn’t take long for San Jose to bust out to an early lead when it was Cole Moberg beating Adam Scheel over the glove. The Stars wasted no time getting it back however, as just 15 seconds later, Jeremy Gregoire busted out all alone and putting it over the pad of Alexei Melnichuk. The Stars weren’t satisfied with just one goal and added a go-ahead goal from Ryan Shea before the period was out. This was Shea’s first professional-level goal and it was a snipe. Going into the break with a 2-1 lead, the Stars had to feel good with their play early on.

The second period was a different story. The Stars relinquished their lead four minutes into the period. San Jose’s Mark Alt got one past Scheel through a screen to tie it up. Again, the Stars would come back to regain their lead. Fredrik Karlstrom got behind the defense and fired a shot on Melnichuk, but it was saved. Melnichuk coughed up the rebound and Karlstrom would recapture the lead. After taking a 3-2 lead, the Stars bore down, looking for the nail in the coffin. At least that was the story until a Gregoire tripping minor would lead to a power-play goal from  Artemi Kniazev. That wasn’t enough. Just 31 seconds later, Santeri Hatakka scored to give San Jose the lead. A 31-second stretch completely derailed all momentum built by the Stars to this point. After the Hatakka goal, Scheel was replaced by Matt Jurusik. To make matters worse, San Jose’s Kyle Topping, who was serving a slashing minor, came right out the box and found the back of the net to extend the lead to two. The air had left the building, an absolutely deflating end to the second period.

The third period felt as though every Stars opportunity was half-hearted and as dangerous as a litter of puppies. Until Anthony Louis reignited the crowd of 5,800 with a goal to cut the lead to one. Hunting for the game-tying goal, the Stars pressed heavily. Unable to connect in the offensive zone, San Jose took advantage. John Leonard was the recipient of a missile off the end boards and made no mistake in hitting the back of the net. Down two with just over six minutes to go, Stars fans headed to the parking lot signaling this one was over. Au contraire. With just over two and a half minutes to go, Stars Captain Curtis McKenzie knifed one in on the backhand to make it a one-score game. On what was his 13th goal of the season, McKenzie had his back to the net when he scored. Tremendous play by the best offseason addition this team could have asked for. With 90 seconds to play, Jurusik headed to the bench for the extra attacker. It paid off when Ty Dellandrea tipped home the game-tying goal with 21.5 seconds to go. The Stars had done the impossible and erase a two-goal lead in just over two minutes. Now, headed to overtime in a 6-6 game, the Stars had stolen a point many had thought lost and were looking for another one.

In overtime, both teams generated chances, but were unable to beat either goaltender. After five minutes of no scoring, we went to the shootout. Anthony Louis, Jordan Kawaguchi, and Ty Dellandrea were all unsuccessful on their shootout attempts. It wasn’t until the third round when Joachim Blichfeld beat Jurusik to win the shootout 1-0 and the game 7-6.

Okay, this was the most wild-west style game the Stars have played all season. There are some positives and some negatives to sift through.

The Stars’ offense came out hot and then hit a lull in the second period. However, a spirited comeback is something to get excited about. the Stars have had trouble putting the puck in the net and getting depth scoring this season. That was not the case Saturday night. This is a good sign that things may be heating up on the offensive end now. This is a team that desperately needs it. The Stars have only generated 30 or more shots on goal twice in their last ten home games. That’s a troubling statistic, but those two games have been their two most recent outings.

In last week’s series against the Milwaukee Admirals, the Stars took some untimely penalties that resulted in crucial goals scored by the opposition. Penalties were lapses in discipline rather than those taken out of necessity. This resurfaced on Saturday when the Stars were on the verge of taking a two-goal lead in the middle of the second period. Gregoire took a tripping penalty and opened the door for a power-play goal. The penalty led to an immediate goal and the evaporation of all perceived momentum. While deflated, the Stars allowed another two goals prior to the end of the period and were struggling to regain their footing. While they gathered themselves before the final horn, this has to be frustrating for the coaching staff. There seems to be an emphasis placed on discipline with the benching of Nick Caamano and Riley Damiani each of the last two games. If other players want to avoid the same fate, they’ll need to clean up the act or score enough points to outweigh their errors.

We’ll see how the Stars respond. They’ll close out their homestand on Sunday when they conclude their two-game set with San Jose. The game will take place at 5 p.m. at the H-E-B Center and the Stars will be celebrating Pink in the Rink night where there will be fundraisers for cancer research and treatment. So come on out and support your Stars on Sunday!