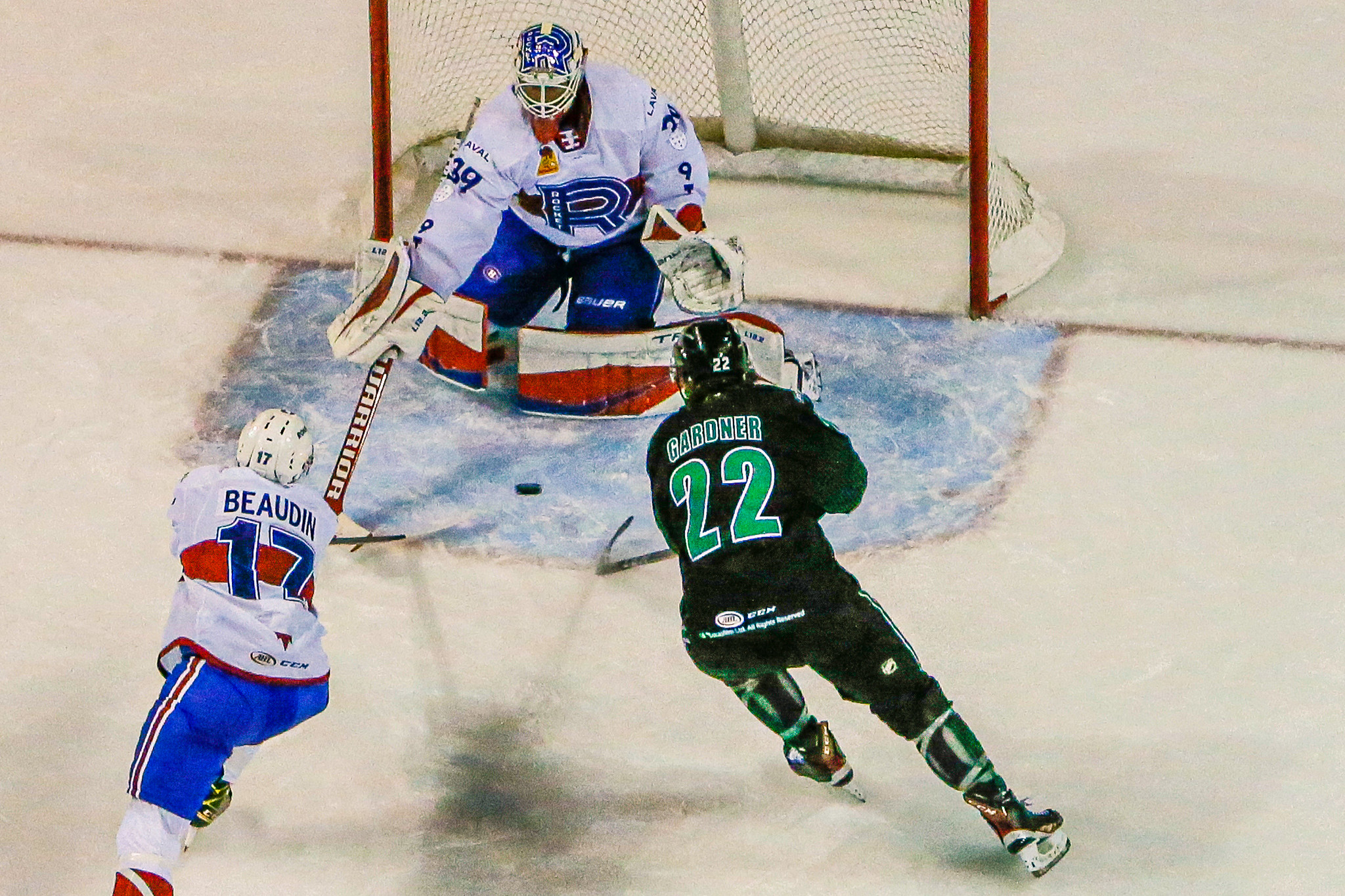 CEDAR PARK, Texas — The Stars concluded their two-game home-stand Saturday night, where their six-game point streak came to a screeching halt. In what was a physical, sloppy display of hockey, the Laval Rocket were able to defeat the red hot Stars 3-2.

Both teams struggled to produce in the first period, similar to their contest Friday night. The first 20 minutes were a carryover of the emotion from the final couple of periods on Friday and was enough to bring the crowd of over 6,000 screaming fans to their feet. The Stars were called for several early penalties coming out of the first intermission. During the initial minor, Rocket captain Xavier Ouellet hit the back of the net with a screened shot from the point. Stars netminder Anton Khudobin was called for roughing in the ensuing celebration, and Ryan Shea was sent off for cross-checking. The Rocket’s 5-on-3 power play fell flat, but a roughing penalty to Jerad Rosburg during the two-man advantage extended the Stars’ shorthanded play. During the Rosburg minor, Laval scored to extend their lead to two on a Jesse Ylonen one-timer deflected by Jean-Sebastian Dea that went between Khudobin’s legs and in.

Less than a minute after falling behind by two, Joel L’Esperance stayed hot with a turnaround shot from the point that went bar-down and in. As the period wore on, the Stars continued to bear down, but counter to the flow of play, Laval’s Peter Abbandonato scored to restore the two-goal advantage. Before the period concluded, Ty Dellandrea was the victim of another brutal hit into the boards. Immediately to the rescue, Thomas Harley uncharacteristically dropped the mitts to defend his teammate. After his time in the penalty box, he received a standing ovation of stick taps and a big high-five from Dellandrea.

With some power-play time carrying over into the final frame, the Stars were primed to cut into the lead. Unable to capitalize on the power play, the Stars continued to press and took over this contest. Despite dominating the majority of the period, there was no budging the Rocket off their two-goal advantage. That was until Anthony Louis blasted a one-timer on the power play. The Stars kept pushing for the equalizer until the final buzzer but were ultimately denied. Despite a valiant effort, the Stars’ six-game point streak came to an unceremonious conclusion.

Though their point streak ended, the fightback and physicality brought by the Stars on Saturday was a sight to behold. This squad looks to be rounding into form with about 40 games to go. It appears the locker room has adjusted to the frequent line-up changes due to the National Hockey League’s taxi squad and has found a formula that will work.

The coaching staff’s decisions on line combinations and power-play units are gaining traction, and the chemistry on the ice is starting to show. One instance, in particular, was on the Louis power-play goal. Before his goal, Louis was playing on his dominant left-wing. He and L’Esperance switched to their off-sides, and it paid off with a thunderous rip to the back of the net by Louis. In four games against Laval this season, Louis has seven goals. Saturday was the first time Louis failed to score a pair of goals against the Rocket this season. That’s a high benchmark for any player, but Louis has started to flex his offensive might, and his connection with L’Esperance has been paying dividends for the Stars the past few games. We’ll see if that continues when the Stars take to the ice again. They’ll jet up to Winnipeg to take on the Moose in a two-game battle above the border before returning to the H-E-B Center on February 7th to conclude their four-game series with the Moose.