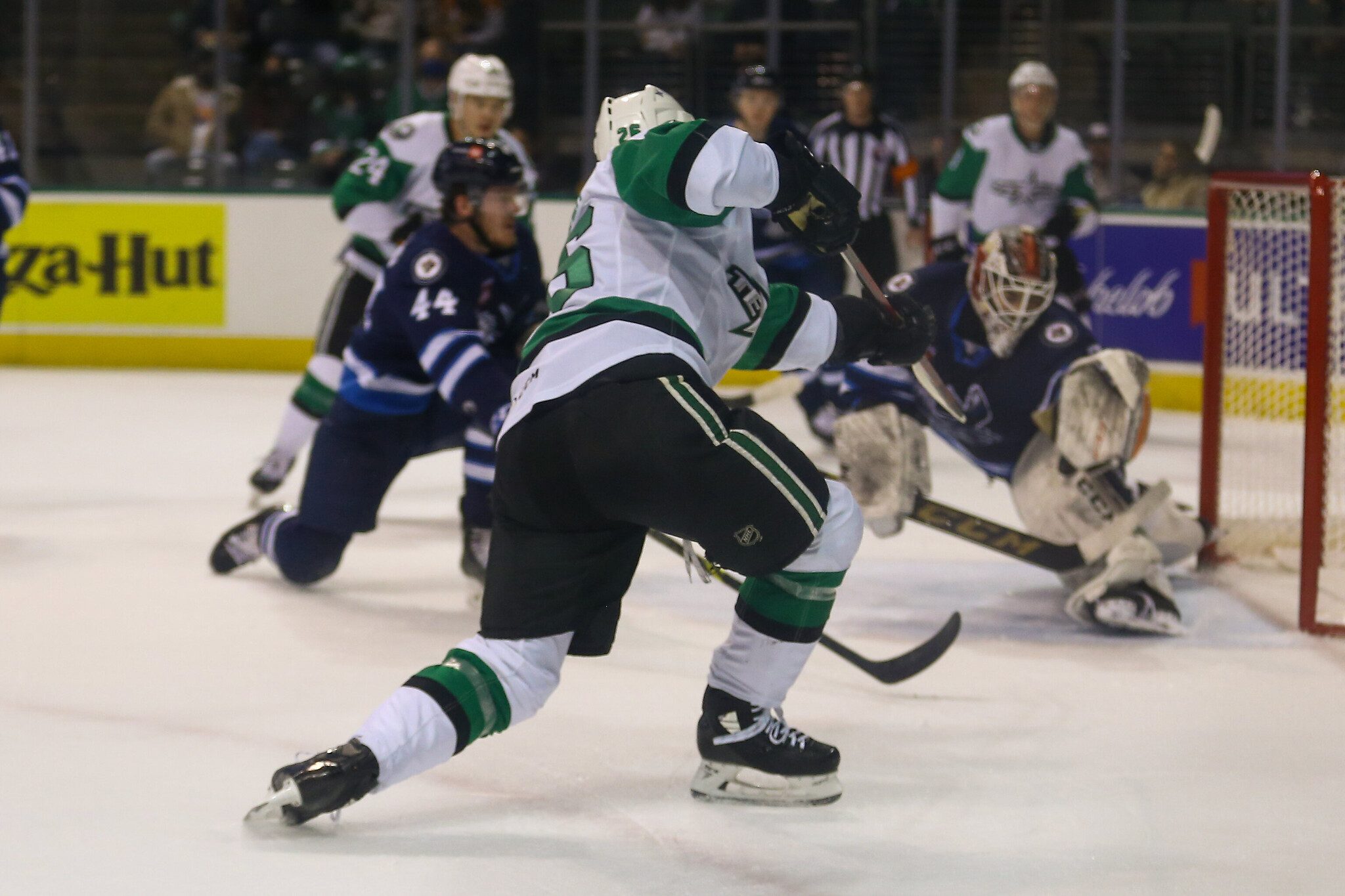 Stars Flame Out in Final Second, Fall to Moose

Stars Flame Out in Final Second, Fall to Moose

CEDAR PARK, Texas – The Stars suffered a heartbreaking loss Saturday night as they closed out their two-game series with the Manitoba Moose. Building off a solid performance on Friday, the Stars looked to settle the score in overtime after some late-game heroics, but were stunned at the buzzer.

If Saturday’s contest was going to be anything like Friday’s, fans were in for a treat. The anger and physicality came back even stronger in the series finale, which saw a handful of fights, lots of huge hits, and a hat trick. The first period offered very little in terms of flashy scoring plays as both goaltenders were sharp through the first 20. However, late in the period, Todd Burgess opened the scoring with a goal off the face-off. Surprisingly, the Stars went into the break down a goal after playing a very good opening period.

Opening the second period, Luke Johnson extended Manitoba’s lead to 2-0, lighting the lamp just 31 seconds in. Responding to falling behind by two goals, the Stars ramped up the aggression and found themselves on the winning side of several fights and the wrong side of a few penalties. During one of the Stars’ minors, Josh Melnick created a 2-on-1 break and fired one under the blocker of Evan Cormier for a shorthanded goal, narrowing the Moose lead to 2-1. After killing off the Manitoba power plays, the Stars would find themselves on a two-man advantage. During the latter minor of the 5-on-3, Anthony Louis put one into an empty net to tie the game with about three minutes left in the period.

Early in the final frame, the Stars struck again on the power play. It was Louis’ second goal of the game with a beautiful shot that hit the top of the cage. The Stars would surrender the lead quickly, with Isaac Johnson to strike on the power play to level the game at 3-3. 75 seconds later, the Moose reclaimed their lead, as Cole Mayer struck for his eighth goal of the season.

With the clock dwindling, Anton Khudobin headed to the bench for the extra attacker. At 18:59 of the third period, Anthony Louis completed the hat trick to tie the game at 4-4. With fans expecting to see some free hockey, the atmosphere was electric. That electricity would fade instantly as Haralds Egle got one past Khudobin with less than a second to go. An absolutely soul-crushing loss for a team who had just clawed their way back into the game just for it to be snatched away.

The Stars played another fantastic game on Saturday, but all that effort was spoiled by the last-second goal. The forecheck and pace carried over from Friday, and while the scoring came together, the results on the scoresheet were less than ideal. Though they scored four goals, the Stars realistically could have scored a few more. The game-plan was apparent from the start: shoot high. It took time to break through Cormier’s wall, but the shots started to fall in their favor. Despite the positives, there are some worrying trends starting to develop.

Finishing through the buzzer is the most noticeable after Saturday’s contest. In addition, the Stars are having trouble converting their chances in the offensive zone. The strategy this weekend was to shoot high on the blocker side. It was working, but not enough to win. The high-danger chances in front of empty nets have not gone in all season and the regularity of these missed opportunities is alarming. The Stars have a tough time finishing their chances in the offensive zone and with several players being recalled to the Dallas Stars taxi squad, it is understandable that not having some of your top forwards available will cost you some goals and wins.

The Stars will take off on a three-week road trip and will not return to the H-E-B Center until the end of the month. They’ll look to string a few wins together and enter the playoff race as we approach the midway point of the season.