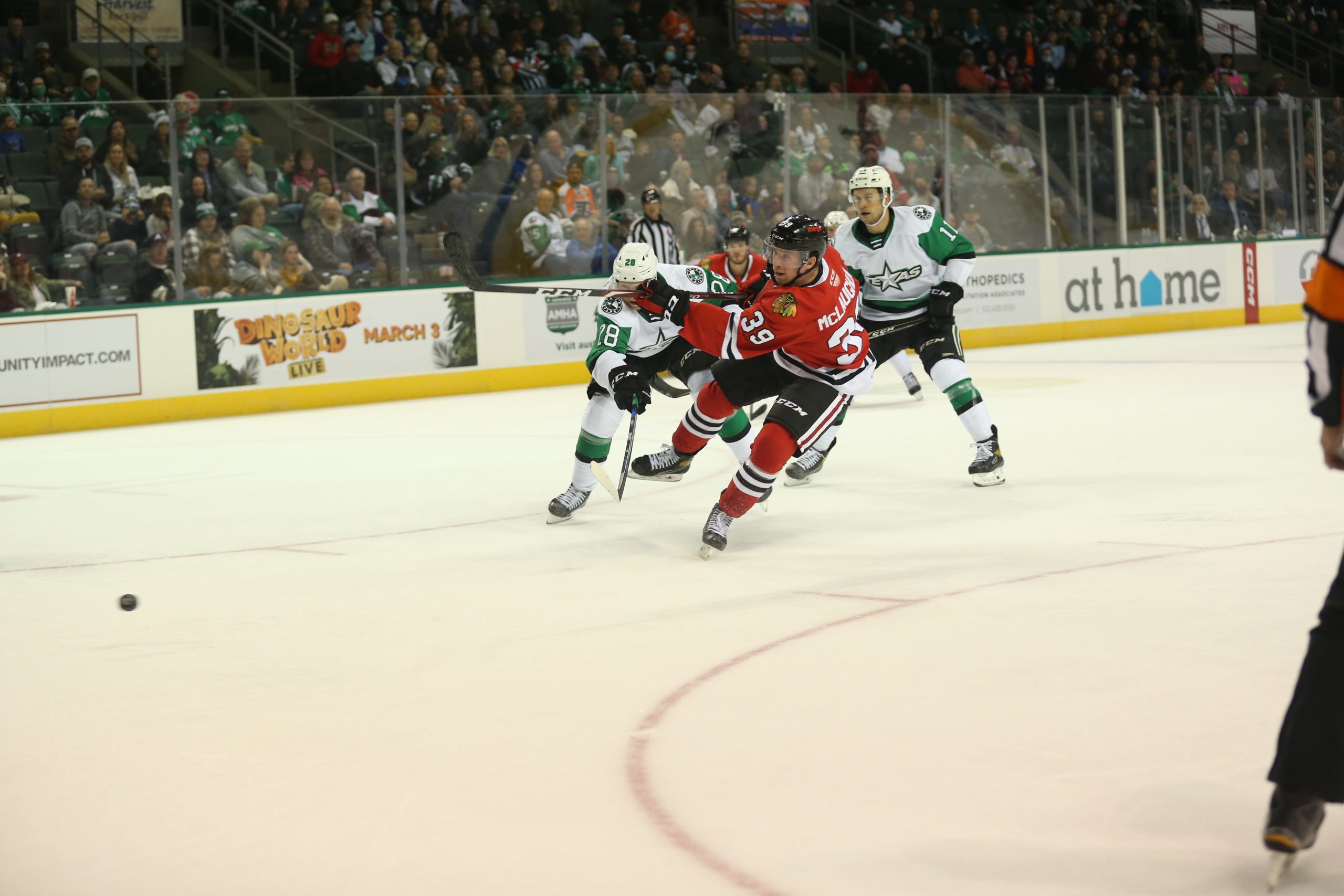 CEDAR PARK, Texas – After an overwhelming performance on Thursday, the Stars looked to extend their win streak to three. On Saturday night, the Stars closed out their series against the Rockford IceHogs with a 4-3 loss. Despite a furious comeback in the third period, the IceHogs were able to hold on and drop the Stars to 3-3-0 on the season.

The Stars picked up right where they left off on Thursday, setting the tone with a high volume of shots and a heavy forecheck. Unlike Thursday’s contest, power plays were coming much more frequently early on. At 4:44 of the first period, Joseph Cecconi was called for hooking. The first shot on the ensuing power play found the back of the net. It was Alexander Nylander with a rocket off the post and in.

However, the early Rockford goal did not dissuade the Stars’ strategy, and they returned to their strong play. With much of the offensive zone time belonging to the Stars, the IceHogs relied on rush chances and getting rebounds.

While it did not work much on Thursday, puck luck favored the visitors on Saturday night. At 13:12 of the first period, 2020 NHL Entry Draft first-round pick Lukas Reichel was the beneficiary of an own goal off of Thomas Harley’s skate over the shoulder of Jake Oettinger.

The second period opened with the Stars on the power play for 1:05. Maintaining puck possession and throwing the puck on net was not enough for the Stars to break through onto the scoresheet, however, as the IceHogs penalty kill remained perfect on the night.

The following 10 minutes featured much of the same: penalties and a lack of high-quality scoring chances for either side. Then, at 12:34, Andreas Borgman scored his second goal in as many games on a shot from the point that was deflected and knuckled into the back of the net. The Stars took their pressure into overdrive over the next few minutes but could still not tie things up.

After having relentless pressure in the Rockford zone, Dylan McLaughlin was able to sneak out on a break and beat Oettinger to extend the lead to two with less than a minute left in the period. After two periods, the Stars trailed 3-1 but led 35-14 in the shot column.

Opening up the third period was Josiah Slavin, slipping through the cracks of the defense to find himself in the crease with a shot through the legs of Oettinger. The IceHogs now had a commanding three-goal lead despite being outplayed for most of the game. The Stars answered back rather quickly with a goal by Jacob Peterson, who recently had been sent down by the Dallas Stars. Peterson got out alone on a break and was able to fire it over Arvid Soderblom’s glove to trim the lead back to two.

Peterson was not done, however, and found himself scoring another goal at 17:16 of the period. This time he buried a rebound off a Riley Damiani shot into a wide-open net. After making it a one-goal game, the Stars pulled Oettinger for the extra attacker. Despite a long, heavy onslaught by the Stars, they were unable to tally the equalizer.

The Stars were the better team in this contest, but the puck luck favored the IceHogs tonight. The rush chances and outside shots that weren’t working on Thursday were finding their way through tonight. I’m not sure Oettinger can be blamed for one ringing off the post and in, nor can I hold him responsible for the unlucky bounce off a sideways Harley skate. A split-second lapse in defensive coverage cost them the third and fourth goals.

The team needs to clean up their game a little bit. Finding themselves in the penalty box so often will catch up to them eventually, but for now, the penalty-killing unit has been sharp.

Overall, the team played very well. Dominating in offensive zone time and shots on goal, it was just one of those games that make you have a love-hate relationship with hockey. I wouldn’t expect too much dismay in the locker room tonight, but falling to a team you outplayed has to sting.