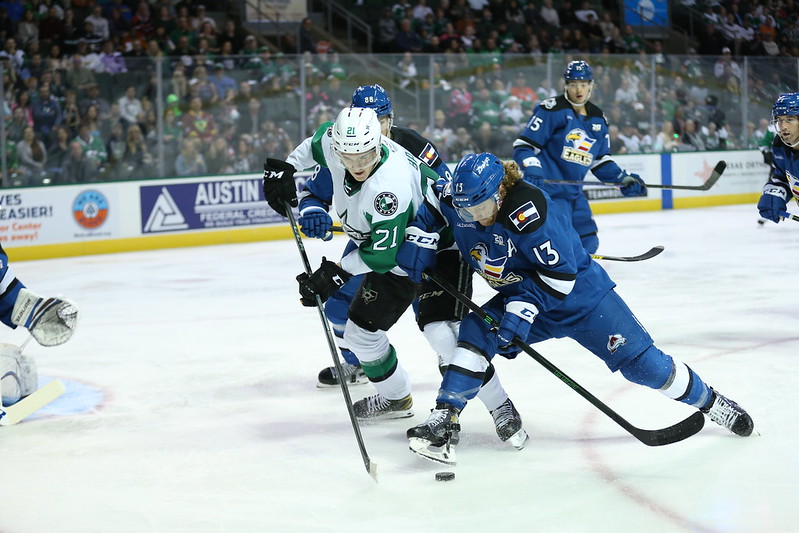 CEDAR PARK, Texas – The conclusion to the Stars’ season-opening series was an opportunity to take some points away from a high-flying Colorado Eagles squad hungry to complete the sweep. In response to Friday’s loss, the Stars came out with a clear purpose and executed to perfection as they earned a split with a dominant 5-1 win.

Friday’s opener seemed to be more of the same in regard to what was seen from the Stars last season. Despite overhauling parts of the forward core, the team had trouble containing and keeping up with the Eagles. So how do you adjust to give your team the chance to win or at the very least, grab a point in the standings? Stars head coach Neil Graham appeared to figure it out.

The Stars came hot out of the gates and established a physical presence in their offensive zone. Relentless pressure forcing turnovers and high-danger chances gave the Stars the opportunity to strike. It took just over six minutes for Matej Blumel to crack the scoresheet. The opening goal came off a rebound from a Ryan Shea shot into a wide-open net. The scoring didn’t cease for long as defenseman Alex Petrovic fired one from long-range over the glove of Justus Annunen. Petro wasn’t done. Less than five minutes later, Curtis McKenzie feathered a beautiful saucer pass across the crease onto Petrovic’s stick. A perfectly executed two-on-one gave the Stars a comfortable three-goal lead heading into the first intermission.

Take a look at Petro's second of the game 👀🤩#TEXvsCOL pic.twitter.com/Mq223hBWhC

The second period was more resembling of the penalty-filled fight fest seen at times last season. With a combined 28 penalty minutes between the two sides, both teams had ample opportunity to either extend or cut into the lead. The former came true for the Stars with a pair of power play goals from Blumel and Marian Studenic. Blumel one-timed a missile to the back of the net three seconds into a 5-on-3 power play, and Studenic redirected a point shot from Shea. Holding the five-goal lead into the final frame, the Stars had all but sealed the deal.

The shutout bid from Anton Khudobin was foiled early in the third period by a Brad Hunt one-timer. This was the first major pushback by Colorado thus far. Trying to build momentum off of Hunt’s goal, Colorado showed play reminiscent of their season-opening win. Racking up 16 shots in the final frame, Khudobin was tested multiple times and displayed the form he had when he took the Dallas Stars to the Stanley Cup Finals in 2020. The Wiley veteran kept Colorado off the scoresheet from then on out and preserved the Stars big win.

Saturday’s result was a glowing example of the potential this squad has. They have gone from being visibly outpaced and beaten to shutting down and dominating a team of highly skilled and physical players in Colorado. The adjustments in formation, specifically on defensive structure were calculated and highly effective. The Stars utilized a deep defenseman to contain the speed and have the opposite-side defender jump up in the offense. This allowed the Stars to trap attackers along the boards and spring the offense from the ensuing turnover.

The indicator of these adjustments being the key to victory? The number of times a defensemen’s name showed up in the scoresheet. It’s not uncommon for a defenseman to get a point on any given goal. But on multiple goals, a defenseman skated forward and beat a defender to put the puck on net for a potential rebound or redirection. On Blumel’s first goal, Shea collected a loose puck at the point from a turnover and shot it off the pad of Annunen. On the Studenic goal, a point shot tipped at the hashmarks fortified the lead. These are great examples and they don’t even include Petrovic’s two goals. The propensity of generating offense via the backend is something the Stars have been building since last season. With the buy-in from the defense core, the offense can continue to be dynamic and flourish as the season continues.

The electric start from rookie Matej Blumel is also worth mentioning. In two games, he has tallied three goals on nine shots and an assist. In addition to his four points, he also had a goal disallowed on a goaltender interference call midway through the second period. While questionable, it did not crater his motivation for another goal as evidenced by the rocket off his stick to make it 4-0. After Friday’s loss, Blumel said he “wants to make the fans happier.” Safe to say he did that on Saturday. With an impressive camp and early production, Blumel is quickly becoming the most likely candidate to be called up from the AHL first.

The Stars have claimed their first points of the season with their big win on Saturday. Now they’ll take to the road for a four-game trip through Iowa, Chicago, and Milwaukee. The next Stars home game is scheduled for Saturday, October 29th at 7 p.m.