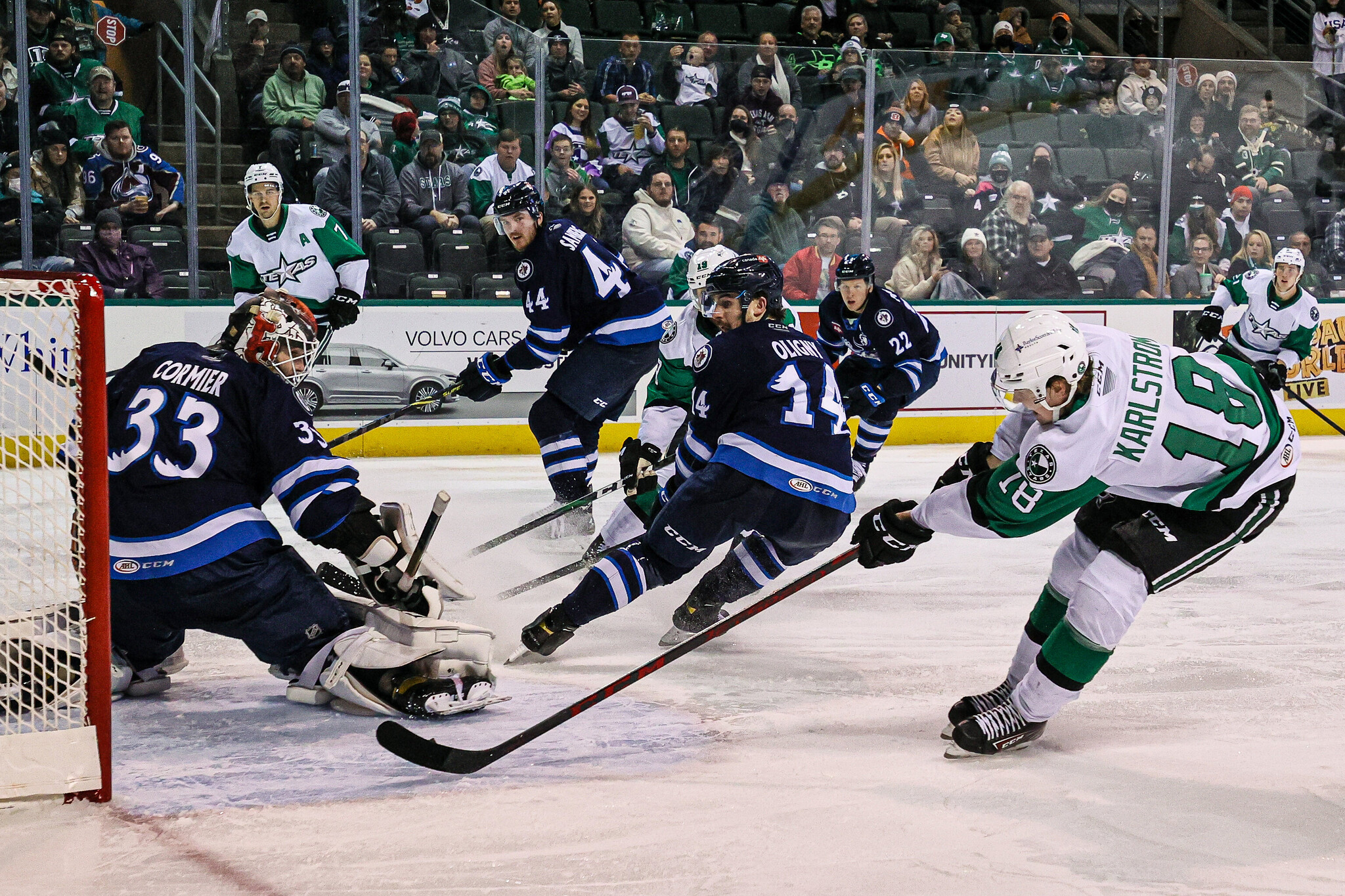 CEDAR PARK, Texas – The Texas Stars returned from a nearly three-week-long hiatus Friday night. In the final set of games remaining on their month-long homestand, the Stars welcome their first Canadian team to the H-E-B Center this season, the Manitoba Moose.

After a long hiatus, the Stars were eager to return to action and were not shy about bringing the energy, throwing bodies left and right, and putting some tough shots on goal. Despite the physical approach, Manitoba’s Austin Poganski fired a shot off the post and in to claim an early lead, a brutal early break for a team with perhaps the worst luck in the AHL this season. Poganski’s goal didn’t take the fight out the Stars, however, as they were quick to continue punishing the Moose roster with heavy hits into the boards. The relentless attack led to Manitoba taking a pair of penalties in the first period, which was met with lackluster rushes on the power play by the Stars.

The second period featured much more chippiness and ferocity, with the Stars and Moose going tit-for-tat with shots and hits. Like the first period, the scoring chances were coming in bunches, but several attempts by the Stars went over the crossbar or wide of the post. For Manitoba, the M.O. was to try and tip point shots on goal, but none were coming close. Both Anton Khudobin and Evan Cormier were sharp through 40 minutes of play.

The Stars put the game on level ground in the final frame, when they broke out on a 3-on-2 rush where Alex Petrovic feathered a pass through the defense to find a streaking Fredrik Karlstrom on the doorstep for the equalizer. The Stars had life late in the game and continued to press the Moose defense into a corner. Despite the suffocating pressure, the Stars surrendered a goal midway through the period when Nelson Nogier slapped the puck off the end boards to Jeff Malott, who buried the go-ahead, and eventual game-winning goal at 9:40 of the third goal. Not deterred by the Malott goal, the Stars ramped up the pressure and continued to throw shot after shot at Cormier. Even though the Stars doubled the shot count of the Moose, they were unable to tie the game and allowed a pair of empty-net goals, eventually falling by the score of 4-1.

Nobody would fault the Stars for coming out flat after a three-week break, but Friday’s contest against Manitoba allowed Texas to put their physical presence on display. Most prominent amongst the Stars’ attack was Riley Tufte, who had not played a game in over a month between the COVID shutdown and being caught up in roster moves.  He quickly became the most noticeable player in the green and white. His physicality made Manitoba uncomfortable and led to some chances for himself and his teammates. Unfortunately, his effort didn’t result in any points for him, but he is playing his game and isn’t phased by the response of his opponents.

The Stars have struggled during their month-long home stand and failed to claim a point in the standings. With the gap between them and the playoff line, the odds of the Stars seeing postseason action are dwindling with little sign of light. However, the Stars have a few games in hand on the teams ahead of them in the standings. If they are able to string together a few wins in a row, they could find themselves fighting for a playoff position in the springtime. They’ll have the opportunity to turn the tide on Saturday night when they close out their home stretch against Manitoba.