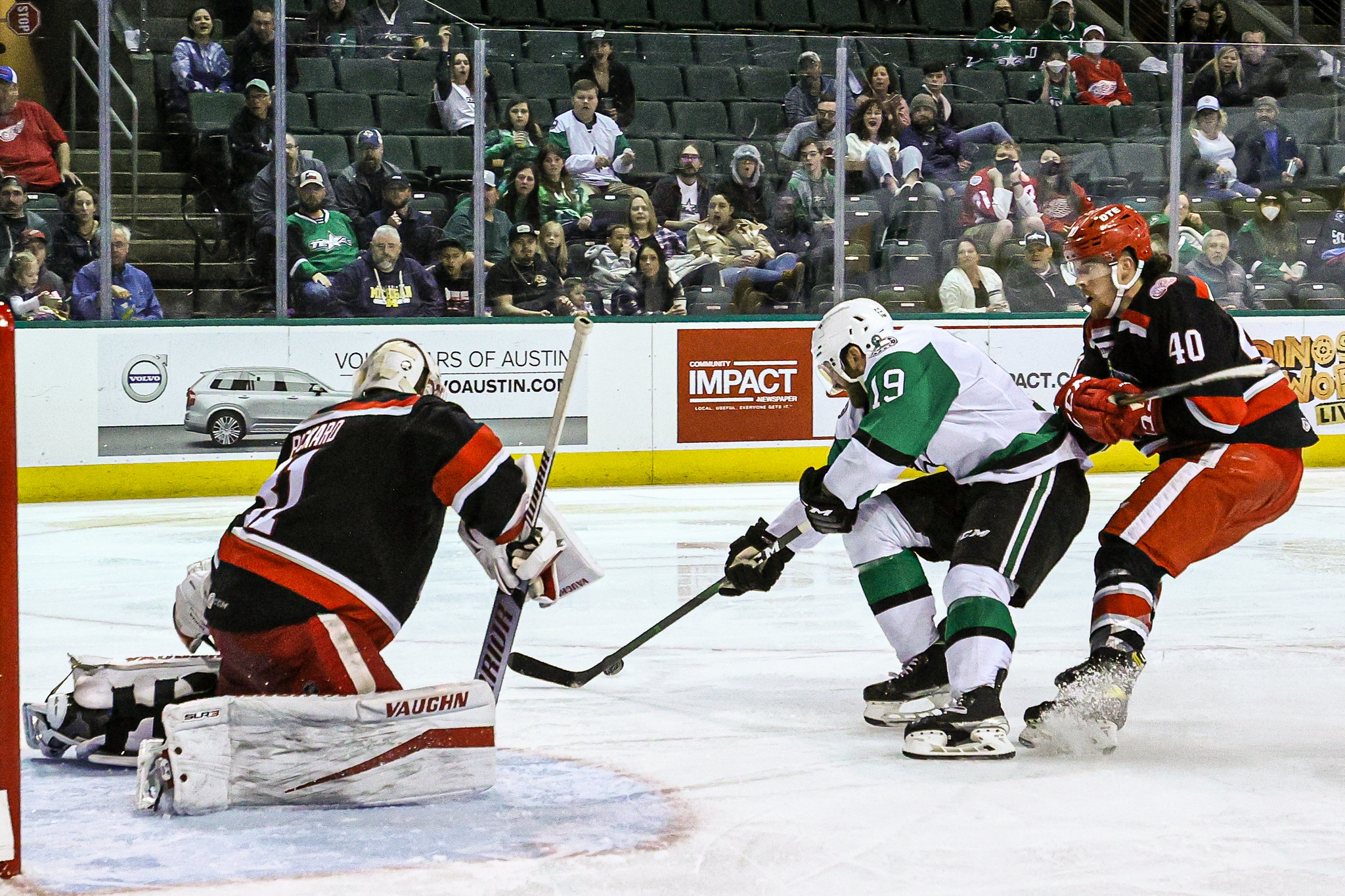 CEDAR PARK, Texas – The Texas Stars closed out their two-game series with the Grand Rapids Griffins Wednesday night. After losing the opener in a sleepy 2-1 game, the Stars answered back with a complete, resounding game and walked away earning a split with a 3-1 win.

The Stars had a tough time on Tuesday generating scoring chances, but that narrative didn’t last long on Wednesday. Instead, the Stars returned to scoring early in the first.

This time, it was Joel L’Esperance getting back on the scoresheet with a beautiful redirection of a Ryan Shea shot. The Stars continued to press deeper into the period until they didn’t. They would find themselves pinned in their own zone late in the period and would eventually concede the game-tying goal.

Griffins defenseman Ryan Murphy beat Adam Scheel with a nice backhand shot to knot it up at one. Going into intermission, the Stars had played their best period in a week and needed to continue their strong forechecking.

In the second period, the Stars would bear down and take control. It was just over ten minutes into the period when Jordan Kawaguchi netted his first goal of the season. It was a huge sigh of relief for a player who has had difficulty being a regular in the lineup this season.

After the Kawaguchi goal, the Stars would continue their takeover of the game into the intermission. To open the third, they would dominate puck possession in the Griffins’ end. In what was the most impressive display of forechecking they have had in quite a while, the Stars would bust the game wide open when L’Esperance buried his second goal of the game. His shot came off a Jeremy Gregoire rebound and there was no doubt it was destined for the back of the net. The third goal would be enough to end it as the remaining time would be salted away with minimal pushback from the Griffins.

The Stars had a tough week prior to their Wednesday night bout. In response, forwards Nick Caamano and Riley Damiani were healthy scratched by the coaching staff. A clear message that the effort has not been good enough during this stretch.

The Stars came out energized and played their best game on their current homestand. There are two games remaining on the eight-game stretch at home and things seem to have turned sunny side up for at least the next few days.

With a pair of goals from L’Esperance and Kawaguchi finally breaking through, there’s life to the scoring depth midway through the season. Expect there to be a bigger push for depth scoring down the stretch as that will likely be the determining factor in whether or not the Stars are playoff contenders.

The Stars will conclude their homestand this weekend against the San Jose Barracuda. They’ll need to notch a few points to stay alive in the race for the playoffs.