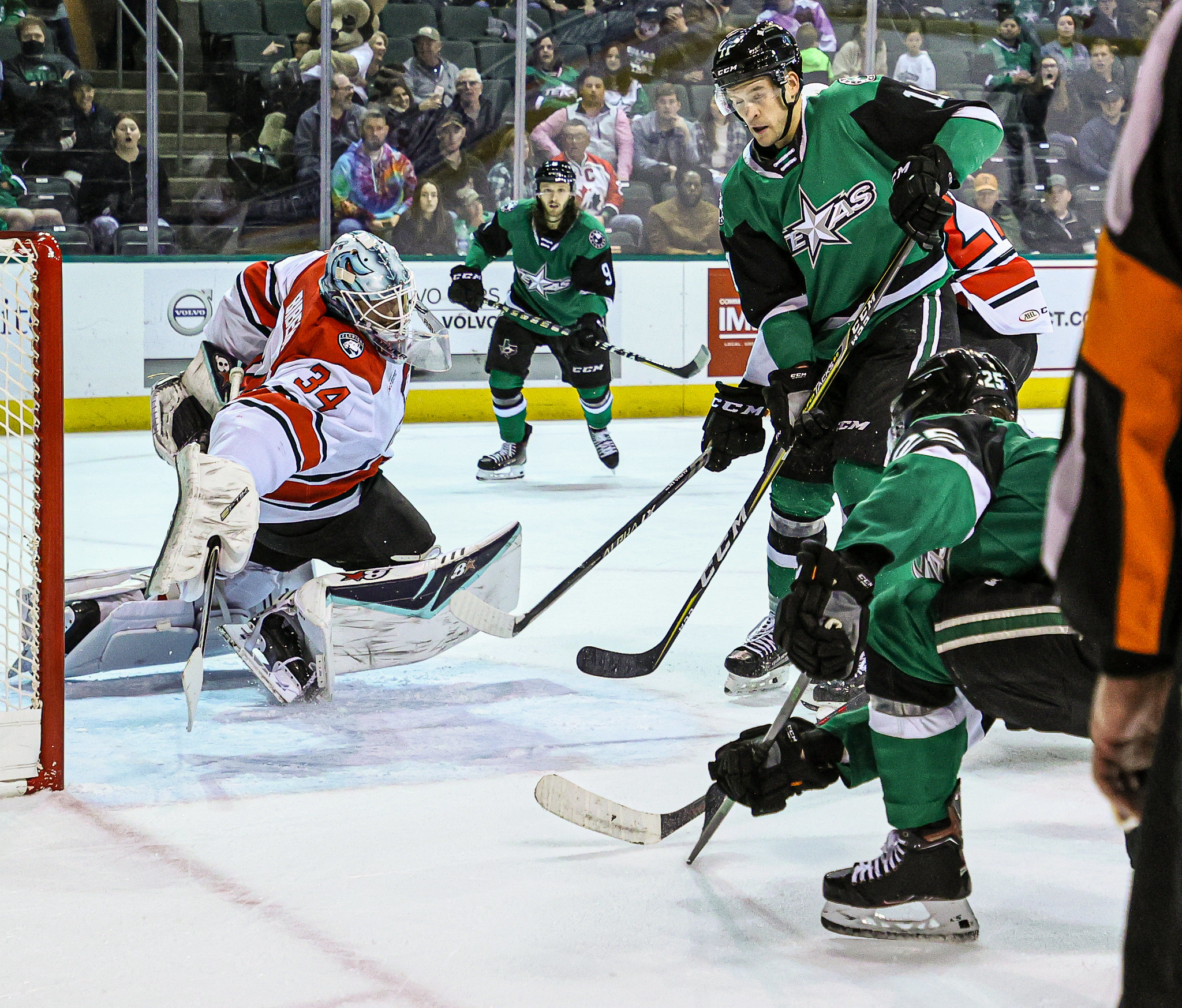 CEDAR PARK, Texas — The Texas Stars finally returned home following a two-week, seven-game road trip. To kick off a brief homestand, they played host to the Charlotte Checkers for the first time this season for a quick two-game set. After a soul-crushing loss in the opener, the Stars came back with a vengeance on Wednesday night to earn a split of their series at home.

Opening their series on Tuesday, the Stars jumped out to their usual early lead. But, following a similar trend, that lead wouldn’t make it to the intermission. In what would become a track meet through the final two periods, neither team was able to score the go-ahead until Cole Schwindt chopped one in off the back of Matt Jurusik in the final 90 seconds. A similar sentiment reigned supreme in the series opener. Failure to maintain or extend leads has set the Stars up for heartbreaking losses all season, and Tuesday was the continuation of that narrative.

Wednesday offered the Stars the opportunity to earn a split of the home series. Following the early lead they took on Tuesday, the Stars one-upped themselves by scoring just 64 seconds in the first. It was the newly acquired Marian Studenic tallying his first goal in a Stars uniform. Holding an early lead for the second consecutive night, the pressure was on the Stars to not fold and allow the equalizer. They made it through the first period unscathed and would add another goal early in the second. Alex Petrovic fired one home from the point. Finally taking a multi-goal lead, the Stars had afforded themselves some breathing room. However, that wouldn’t last long as Zac Dalpe cut into the lead just past the game’s midway point. After the Dalpe goal, the Checkers took control and challenged Adam Scheel and company. The Stars did not yield and answered with a huge goal from Joel L’Esperance to regain their two-goal advantage heading into the second intermission. That L’Esperance goal came via a turnaround pass from the end boards to the slot by Curtis McKenzie.

Coming out of the break, the Stars turned it on. Goals from Anthony Louis, Riley Damiani, Jordan Kawaguchi, and Rhett Gardner busted the game wide open and put this game far away from the possibility of being close. The Stars flexed the offensive might they have lacked for most of this season and provided a convincing blowout victory over what will most likely be a playoff team.

Tuesday’s opener was a disappointment that felt all too familiar for the Stars. This season has featured losses on own-goals, last-second collapses, and other brutal breaks. Wednesday was a bit of retribution for those defeats. As a result, the narrative is broken at least for one night.

The Stars were bright during this series and offered us a glimpse at what next season might showcase. Unfortunately, with so much turnover on the roster this season, it has been difficult for the players to find chemistry and rhythm. As a result, the team has struggled to mount momentum throughout the season, and their record has suffered. Now, the team seems to have found something to work with going forward.

The combination of Louis and L’Esperance has been magnificent as of late, but they have been broken up now, with Louis playing the right wing on a line with Dellandrea and Studenic. The latter two seem to be in sync early on in their time together. Damiani has taken L’Esperance on his wing, and their line has been producing offensive opportunities as well. On defense, it is much of the same. Gleason and Petrovic have become the clear top pairing and provide a solid two-way attack. Depth-wise, physicality reigns supreme and offers that grinding identity we presumed to see throughout the season.

The team has found success with the emergence of these combinations and their effectiveness down the stretch. It feels as if a weight has been lifted off this squad. As the season winds down, the call-ups have ceased for the most part and allowed the club to toy with a more consistent lineup. And with the arrival of Studenic, who was claimed off waivers last week, there is an injection of top-line talent and an excellent running mate for Dellandrea.

The Stars will look to build off this massive win and strong series this weekend when they host the Tucson Roadrunners on Friday, March 11th, and Saturday, March 12th at 7 p.m. at the H-E-B Center.