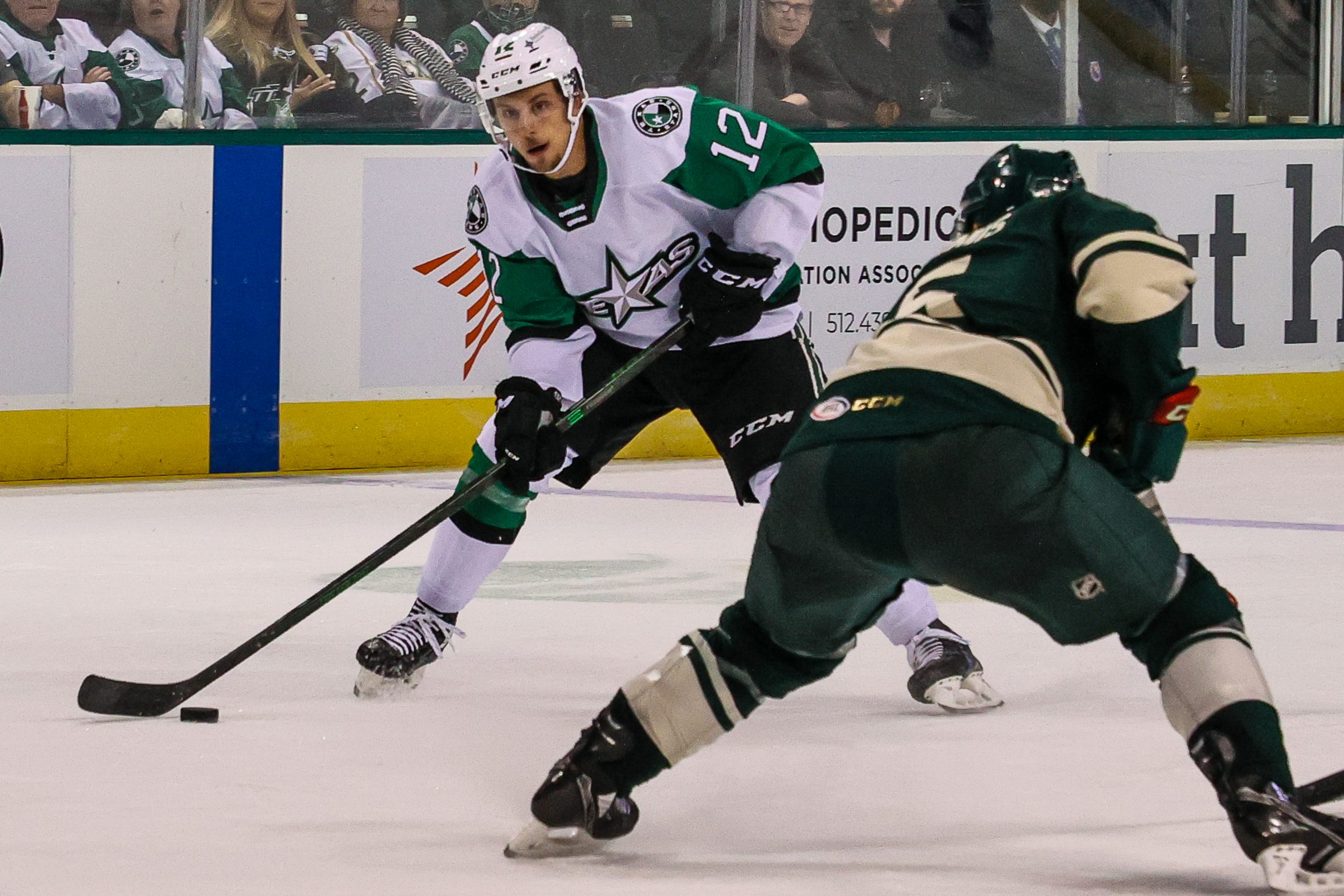 With yet another outstanding performance in net by Jake Oettinger and a few good bounces, the Stars were able to split their season-opening doubleheader

CEDAR PARK, Texas – The Texas Stars closed out their opening weekend series with the Iowa Wild on Sunday with an impressive 3-1 win. With yet another outstanding performance in net by Jake Oettinger and a few good bounces, the Stars were able to split their season-opening doubleheader.

The Stars had a few things that needed to be addressed prior to squaring off with Iowa tonight. In their first meeting Saturday night, the Wild were relentless on the forecheck and were the aggressors for most of the night. Couple that with the Stars’ inability to convert on any of their seven power-play opportunities, including a pair of 5-on-3 sequences, the Stars could only go up.

After being shutout in their first meeting, the Stars wasted very little time in getting on the board. Jordan Kawaguchi found a wide-open Ryan Shea in the slot. Shea’s wrister was deflected in front by Nick Caamano and the Stars drew first blood. As the period wore on, the Wild got several power-play chances, including a 5-on-3 advantage for 52 seconds. Despite the Stars’ undisciplined play, they were able to maintain the lead into the second period.

The early portion of the second period featured a lot of back-and-forth play with the Stars establishing a forechecking presence. However, at the 6:27 mark of the period, Iowa captain Cody McLeod laid a cross-check on Oettinger, prompting a response from defenseman Jerad Rosburg. McLeod got tacked with two minor penalties and Rosburg went off for one, resulting in a Stars power play. 50 seconds in, it was Riley Damiani netting his first goal of the season to put the Stars up 2-0. The celebration was short-lived, however, as Oettinger’s shutout would end at the hands of the Wild’s top prospect Marco Rossi, who scored on a quick wraparound less than a minute later.

The Stars opened the third period a man down, but were able to stymie the Wild power play again. The Wild took a couple of undisciplined penalties midway through the frame and gifted the Stars another 5-on-3 opportunity. This time there would be no mistake. Thomas Harley, who has been running the point on the first power-play unit, took a shot through traffic, and Wild goaltender Dereck Baribeau could not control the rebound which landed right on Damiani’s stick for his second goal of the game. Now having a multi-goal lead for the second time, the only thing the Stars had to do was stay poised and play smart defensively.

Minus a couple of penalties late in the period, the Stars stayed true to form, blocking shots and winning board battles. In the end, the Stars were able to stave off the Wild and close out the game with a two-goal cushion.

It may have taken longer than desired for the puck to go in for this team, but there is much to be encouraged by Sunday’s performance. First, the power play was able to get going, with two Damiani shots finding the back of the net. The penalty kill remained strong, not allowing a goal for the second straight game. However, there were far too many penalties taken by the Stars tonight. Giving a team like the Wild six opportunities on the man advantage is not a recipe for success, but then again, those may just be early season kinks head coach Neil Graham will need to work out.

Second, the goaltending from Oettinger this weekend was superb. Allowing only two goals in as many games on 77 shots is quite impressive. Several times throughout this game it felt like nothing was going to beat him. With every point-blank wrister that came his way, there was a trapper save with a little flare to it. He certainly has a ton of confidence even this early in the season.

Solid goaltending and an offense that is just starting to wake up is cause for excitement. However, with the Stars lagging behind in the shot column, I have mild concerns about this team’s reliance on goaltending as a safety net for some lapses in coverage. Despite these concerns, I am confident that as the season rolls on, the Stars will be looking towards a run at the Calder Cup.