CEDAR PARK, Texas — The Stars took to the ice at H-E-B Center to face the Colorado Eagles for the second time in as many nights Saturday. Looking to avenge a tough shootout loss in a game they arguably should have won, the mission was clear. Win.

The Stars came out guns blazing tonight, taking no time to get on the board. After failing to net the winner on his penalty shot last night, Fredrik Karlstrom scored just 2:16 in from Oskar Back. The storyline of being incapable of holding and/or extending leads continued when Callahan Burke buried the equalizer at 4:00 from Jean-Luc Foudy. Neither of the opening goals came from sustained pressure but rather a result of quick strikes in transition. Transition play is slowly becoming the kryptonite of the Stars defense. The forecheck of Texas came out in full swing after the Burke goal, however, and the Stars began to press for the lead. Both sides went to the power play and were unsuccessful. After the failed power plays, it’s captain Curtis McKenzie getting on the board. Alex Petrovic sprang a 2-on-1 break with a stretch pass to Ty Dellandrea, who got the primary assist with a beautiful cross-crease pass. Now with the lead back, the Stars were hungry for the insurance goal. Going back to the power play at 17:05 of the first period, the opportunity was there. But, after a scramble in front, McKenzie was nabbed for goaltender interference after falling on a sprawled-out Justus Annunen. A few moments later, Back took a high-stick from Jacob MacDonald, which drew blood, resulting in a four-minute penalty on the Colorado captain. 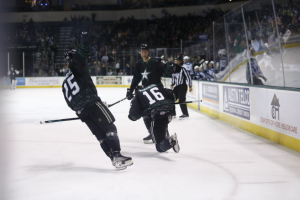 With 2 seconds of 4-on-4 play and 3:11 of 5-on-4 for the Stars rolling over into the second frame, the Stars had firm control of this game. Before the first minor expired, McKenzie found the back of the net again for his second of the game. A two-goal lead and two minutes of power-play time left. Can the Stars put this away quickly? The short answer was “no.” The Stars got sloppy in their own end and started turning the puck over in front of Colton Point and, in turn, giving Colorado plenty of high-danger chances. Despite the less than ideal puck movement, the Stars held strong and maintained the two-goal lead until Dylan Sikura scored a power-play marker at 15:43.

Now only holding a one-goal lead with 20 minutes left to play, the cracks started to open more on the Stars. Eighteen seconds into the third period, Dennis Gilbert netted the game-tying goal. The rest of regulation featured Colorado bringing the intensity Texas had brought in the first 40 minutes to them and putting the home team on the cusp of defeat. Despite a 5-on-3 man advantage, Colorado took over this contest and had several chances to put this one away. Instead, the Stars remained perfect on the penalty kill this weekend into the overtime period.

Thirty seconds of power-play time for Colorado rolled over into overtime. With Andreas Borgman coming out of the box with 4:30 left in the game, the fans got a taste of 4-on-4 for nearly three minutes as there were no whistles allowing the teams to go to 3-on-3. In overtime, the scoring chances dramatically favored Colorado with two shots ringing off the iron cage. For the second straight night, we were headed to a shootout. This time, the Stars switched up their order, and Anthony Louis sealed the game with a nifty one-handed tuck on Annunen in round one of the shootout.

As stated in the previous game’s recap, the power play has been abysmal, and Texas has had difficulty capitalizing on their opportunities. After going 1/7 on the man advantage Saturday, I’ll double down on that take. In addition to the special team scoring woes, defensive zone possession is starting to become a concern. Texas doesn’t seem comfortable in their own zone and are making too many difficult passes to exit the zone. This team thrives on the forecheck and being physical. It’s a recipe for success, but when you can’t establish or maintain the forecheck at any point in the game, the cracks start to show.

This reminds me of the 2019 St. Louis Blues team, who were notorious for their physical play, which was one of the main reasons for hoisting the Stanley Cup. That formula has worked with the 2020 Dallas Stars Cup Final run and, most recently, the Montreal Canadiens in last season’s playoffs. While this is not quite the NHL, the results show this is a way teams can win. I’m sure this week’s practice will feature lots of work on the power play and defensive zone breakouts. The Stars improved to 5-6-0-1 this season and will be back in action Friday, November 19th, at H-E-B Center, where they will face the Grand Rapids Griffins in a two-game weekend series.