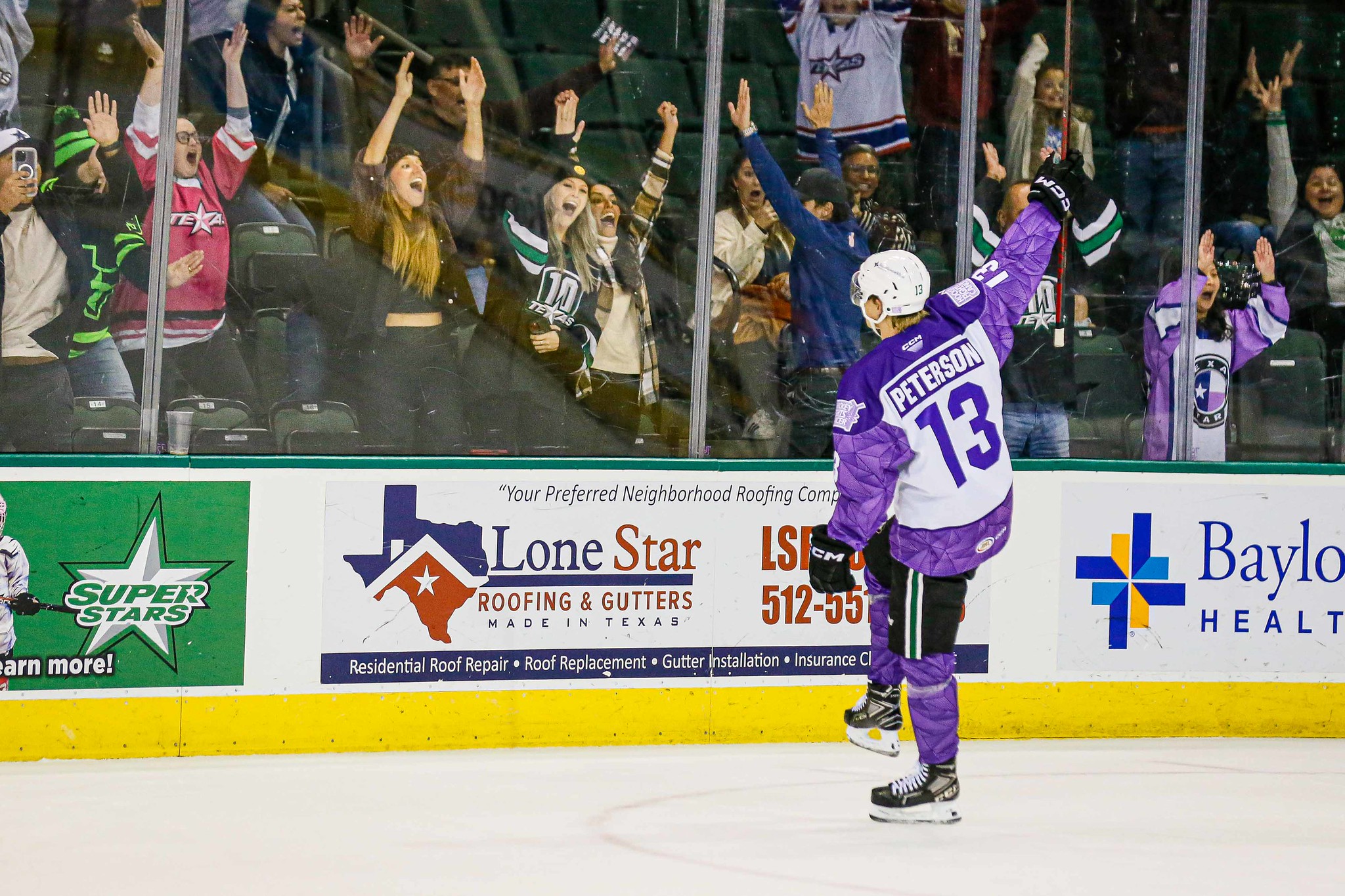 CEDAR PARK, Texas – The Stars opened up their weekend series against the Manitoba Moose on Friday looking to gain some points in the standings and potentially move ahead of their opponent. The Stars mounted a historic comeback in the final minutes to secure a massive two points via a 6-5 overtime win.

It’s easy to think a team traveling over a thousand miles would come out of the gate slowly. While that was not necessarily the case for Manitoba on Friday, it sure felt like it after the Moose took an early lead. Despite carrying a 1-0 lead through the first intermission, the Stars answered in their typical second-period fashion. A snipe from Riley Barber and a hammered one-timer from Fredrik Olofsson catapulted the Stars into a well-deserved lead. Up to this point, the Stars had a 21-7 shot advantage but were continually being stymied by Manitoba goaltender Arvid Holm. In control and in the lead, the Stars got sloppy and took a few undisciplined penalties. On the power play, Leon Gawanke tied it at 2, a score that would stand into the second intermission.

In the final 20 minutes, Manitoba kickstarted its offense and began throwing every puck at the net. Taking over the game, the Moose capitalized on a big rebound. It was Jeff Malott restoring Manitoba’s lead. Just minutes later, Malott got his second to extend the lead to two. With time dwindling, the Stars had a huge mountain to climb.

In what appeared to be a bizarre penalty, Manitoba’s Evan Polei was sent off for abusing an official. In frustration, Polei slammed his stick into the glass and it ricocheted back and hit a linesman in the head. This odd turn of events gifted the Stars a late power play.

While on the man advantage, the Stars pulled the goalie and cut the lead in half. It was Will Butcher with a screened shot that deflected off a Manitoba defenseman and in. Seconds later, the Stars were able to pull the goalie again, but Alex Limoges put one into the empty net to make it 5-3 Manitoba. Less than a minute later, Mavrik Bourque said “not so fast” and wired one off the post and in to make it 5-4.

After the ensuing puck drop, the Stars got the puck deep in the Manitoba defensive zone and were able to get their goalie out for a fourth time. The Stars maintained control of the puck and made a final push. Ben Gleason slid the puck through two defencemen, right onto the stick of Butcher. With what appeared to be a 2-on-1 rush in the low slot, Butcher took it himself and flipped it over the blocker of home to tie it with less than 10 seconds to play.

Heading into overtime, still shaking from the epic final 3-plus minutes, the Stars looked secure that extra point. In the midst of a back-and-forth overtime, Marian Studenic crashed the net and drew a penalty. On the ensuing power play, Jacob Peterson completed the comeback to give the Stars a 6-5 win against their division rival.

#MBvsTEX | DON’T CALL IT A COMEBACK! Peterson wins it in OT for the Stars! pic.twitter.com/Amno4YyuMD

The Stars proved they never say die with a spirited stretch to snatch victory from the jaws of defeat. However, there are some things that need to be addressed.

The Stars have shown there are some issues that need to be cleaned up for this team to have sustained success. The Stars dominated in the areas of puck possession and shots on goal. After the first period, the Stars led 16-4 in shots, but trailed 1-0. The lone goal was a tight shot over the shoulder of Matt Murray. Despite that, the Stars continued to stretch the shot advantage to the point they had tripled up Manitoba. In traditional Texas Stars fashion, they came out with a dominant start to the second period. After jumping ahead, they reverted back to some bad habits.

Taking a pair of undisciplined penalties, conceding their lead shortly after, and seemingly being goaded into shorthanded situations by retaliating against Manitoba’s antics, the Stars were shooting themselves in the foot far too often to win this game. The misery continues when Malott scored two quick goals to essentially seal the game. Although this was not the case, I’m sure the coaching staff will be adamant about cleaning it up and avoiding ticky tack penalties.

There were some commendable performances coming out of this awesome comeback win. First, there was Butcher. In the final 3:11 of regulation, Butcher recorded three points (2G, 1A), including the game-tying goal with 9.9 seconds to play. It’s rare to see a defenseman score a pair of goals, or three points, but he did both in a 3:01 stretch when his team needed it most.

Lastly, Barber has been more than impressive since signing with the Stars this summer. With a goal and an assist on Friday, Barber is up to 16 points (8G, 8A) in 15 games. It’s also worth mentioning that he had 11 shots on Friday. Barber was the focal point on the power play and continued to create by putting the puck on net. He’s on pace to set a new career high in goals, points, and shots. He’s been given a substantial role with the team and is producing in the minutes he’s getting.

The Stars will try not to revel in this win for too long, as they host Manitoba again on Saturday night. Looking to earn their first sweep of the season on home ice, they’ll need to be prepared for a spirited, physical fight. Manitoba isn’t going to look too kindly on blowing a two-goal lead in the final 1:02, and they certainly don’t want to surrender any points to a division rival.