The Stars snatched victory from the jaws of overtime and secured four points in the standings over the weekend. 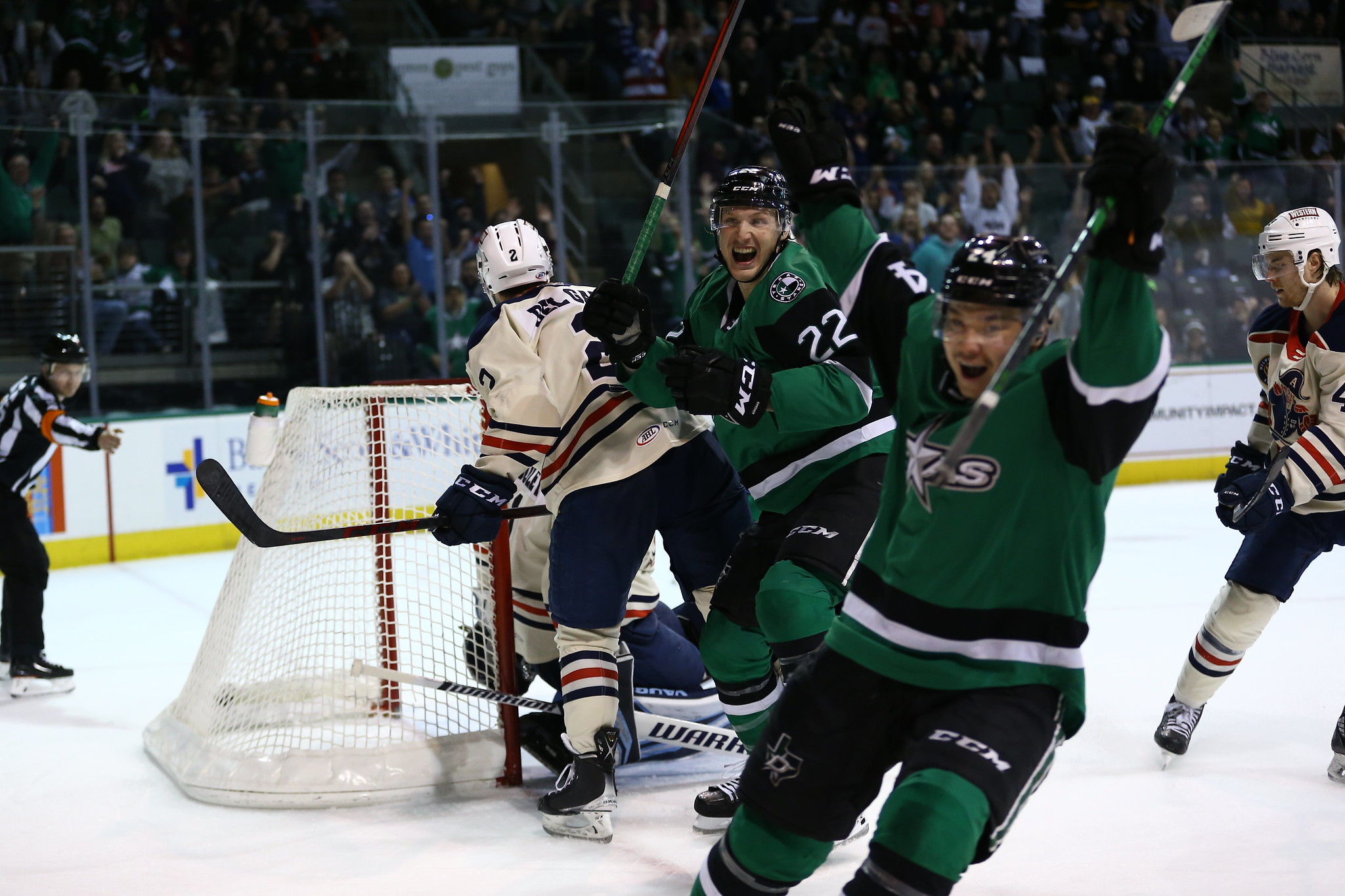 CEDAR PARK, Texas – The Stars concluded their brief two-game homestand Saturday night. Opposite of the Stars were the Milwaukee Admirals, who had a sour taste in their mouth after falling in a shootout Friday night. Their plans would be foiled by a last-minute goal, securing the Stars’ second straight series sweep at home.

Unlike their previous matchup, the first period lacked scoring and was instead a heavy, high-speed twenty minutes of action. Despite a pair of power plays and registering six shots on the man advantage, the Stars and Admirals went into the first intermission scoreless.

The goose eggs on the scoreboard would not last long, however, as Stars captain Curtis McKenzie redirected a Ben Gleason point shot past Devin Cooley on the power play at 6:48 of the second period to take the lead. Less than 90 seconds later, the Admirals tied it up thanks to Cole Smith. His equalizer came after Adam Scheel made a diving chest save on Matt Donovan. Out of the net, Scheel was unable to cover the far post, allowing Smith to tuck it home.

Despite surrendering the lead, the Stars continued to hunt in the Milwaukee end. With Cooley out of the net, Jordan Kawaguchi had a look at a wide open net, but didn’t pull the trigger in time and was denied the go-ahead goal, at least for now. Moments later, he would sneak one off the corner of the crossbar and post and in off the rush to restore the Stars’ lead at the 14:16 mark. Like the previous lead, this one didn’t last long. Just three minutes later, Dylan Blujus would tie it up on an eerily similar play to the Admirals’ first goal. Scheel was down, fighting off a number of Admirals before the puck squirted loose and was tapped in.

Coming out of the second intermission with the game up for grabs, the anticipation for intensity was warranted. Rather than a hard-hitting track meet, the fans enjoyed a back-and-forth display of both teams trying to avoid losing. For much of the final period, both teams had trouble setting up in the offensive zone and were more interested in keeping the puck in the neutral zone. That was the case until Milwaukee went to the power play twice midway through the period. On both occasions, the Stars killed the penalty with effectiveness despite a couple of close calls on each Milwaukee power play. With time winding down, the Stars went to the power play. Primed with a golden opportunity to take the game in the regulation, the Stars’ second PP unit would get it done. It was Rhett Gardner knifing one past Cooley with 1:25 left to give the Stars their third lead of the game. Immediately after the Gardner goal, Cooley went off for the extra attacker. The Stars salted away the rest of the time though not without some scary moments as the Admirals’ offense began closing in on the crease. The Stars snatched victory from the jaws of overtime and secured four points in the standings over the weekend.

This was the game the Stars wanted from start to finish. They were not called for many penalties, got good goaltending, and controlled the puck for much of the night. Not an overly flashy style of play, but effective nonetheless. There is plenty to feel good about coming out of this weekend. Point production is coming from every line and Scheel has been solid, to say the least. The Stars have had no trouble being competitive night in and night out, but the finish has been lacking since October. Now, it appears they’re putting it all together with consistency. And just in time too. There are just a few weeks left in the season and with their sweep of Milwaukee this weekend, the Stars now hold a playoff spot are back at .500.

We’ll see if the Stars can make it to the Calder Cup Playoffs this season. The Stars will be on the road for the next two weeks before returning home on April 9th to take on the Iowa Wild. That will mark the beginning of a five-game homestand, which will be the last of the regular season, and it will likely be a major factor in deciding who makes the playoffs.