TULSA, Okla.-  The Tulsa Oilers played one of their best games of the year on Saturday, but the Idaho Steelheads fought until the bitter end to deny the Oilers the final result. 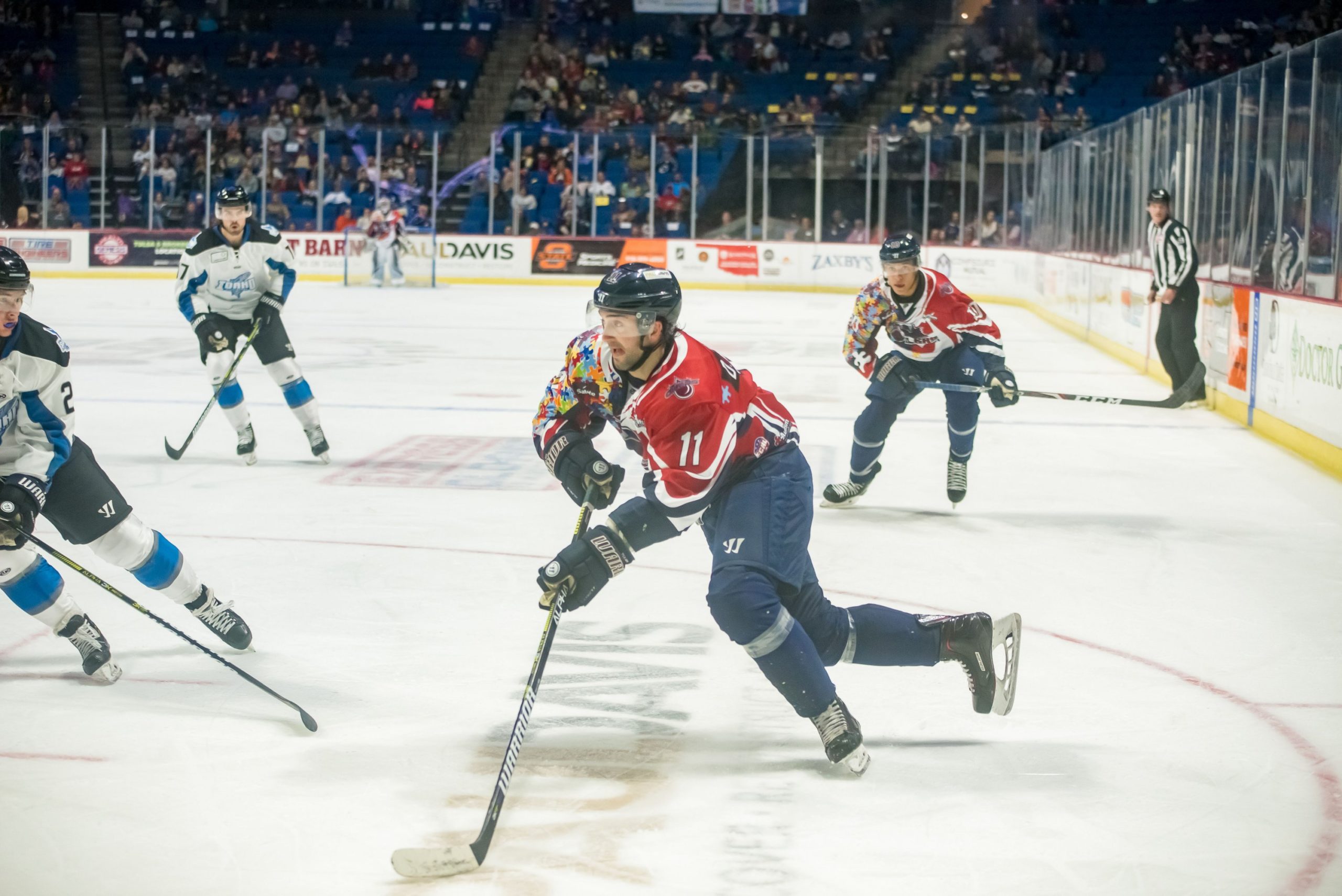 TULSA, Okla.-  The Tulsa Oilers played one of their best games of the year on Saturday, but the Idaho Steelheads fought until the bitter end to deny the Oilers the final result.
The Oilers outshot the Steelheads 41-18 over the final two periods and 55-29 overall, but they weren’t able to pull away and ended up needing bonus hockey to find the win column. The visitors netted the game-tying goal with just four seconds on the clock to ensure that each squad would receive at least one point on the evening.
The action got underway quickly on Autism Awareness Night, as just 3:17 into the contest the crowd of nearly 9,000 people had their first chance to lift the roof off the building.
The roar was in response to Charlie Sampair bagging his fourth goal of the year to open the scoring for Tulsa. The forward received his own rebound and sent a backhander from the right of the slot back against the grain that beat Idaho goaltender Colton Point just inside the far post to make it 1-0 Tulsa with 16:43 remaining in period one.
The Steelheads responded quickly, however, cashing in on a power play 4:12 later. The goal came off the rush as Will Merchant drove to the far post and directed a crisp pass from Matt Lippa into the back of the net to even the score at 1-1 with 12:31 left in the first. Neither side could find twine again in period one, and the game headed to the second even at a goal apiece.
The second period was completely dominated by Tulsa in terms of time of possession and shots, but despite a 20-5 edge in shots, it did not translate to a lopsided advantage on the scoreboard.
Tulsa briefly restored its one-goal lead five minutes into the frame, as persistence played off for the home side.  Danny Moynihan stuck with it after a great chance was sent wide from point-blank range, and beat Point to the near post after a scramble in front left Point struggling to get back across.  Moynihan’s fifth made it 2-1 Oilers with 14:59 to go in the second segment.
The Steelheads once again responded in a timely manner, however, once again cashing in off a counterattack. Joe Basaraba started the play by shooting in on the forecheck and winning the puck behind the Tulsa net. He turned and wired a pass to a charging Anthony Nellis, who directed a one-timer top corner to make it 2-2 nine minutes into the middle stanza.
The Oilers carried the pressure and edge in shots to the final frame, and took the lead once again with a power play marker midway through period three. The puck came to Josh Wesley stepping up from the far point, and he blasted one from the dot that rippled the mesh and gave Tulsa a 3-2 lead with 10:58 to go in regulation.
Tulsa controlled the pace of play, but they were unable to pierce the Idaho defense consistently on Saturday. This was due both to a stellar 51-save effort from Point, but also, as the Idaho goalie told The Sin Bin, because the defense helped keep the shots coming from manageable positions:

“The guys were keeping (Tulsa) to the outside. I was getting a lot of outside shots, which is a lot easier than getting shots from inside the house all night. So, the guys did a great job defensively tonight and it was a tight one. We’ve been on the road for awhile, and the pucks aren’t always going to bounce your way. Obviously, we would have liked to get a win, but that’s the way it goes sometimes.”

Tulsa looked set to claim a hard-fought 3-2 win anyway after killing a minor with Point on the bench for the extra man, but Idaho was not ready to concede the two points just yet.  With just four seconds left, Kyle Schempp spun and fired a shot from behind the goal that bounced off Tulsa tender Devin Williams and in to stun the arena and send the game to overtime.
Each team had a breakaway early in the seven-minute, three-on-three, sudden-death overtime, but first Williams and then Point held their ground to make sure the festivities continued. The Steelheads then earned a power play with 2:28 left in the extra session, but the crowd fired up the Oilers penalty kill, who delivered to force a shootout.
Idaho drew first blood during the skills competition thanks to A.J. White, but Brent Gates immediately answered to level it at one after one shooter each. Williams and Point both made saves in round two. Then, after Williams made another save in round three, Sampair delivered final victory when he slipped the puck under Point and in on the Oilers’ third attempt.
Point spoke afterwards about the importance of gaining at least one point on the night, and praised his teammate Schempp for the last-second heroics:

“Like I was saying, it’s the end of a long road trip and the more points we can steal on the road, the better off we’ll be at home. Congrats to Schemppy for burying that one with four seconds left. that’s unreal; We needed that. If you look at how we dominated in OT…just couldn’t find it in the shootout. But it’s definitely going to give us life for tomorrow — last game on the road for a little bit, then go home. Looking to grab a lot of points.”

Each side gained a point, but Tulsa earned the all-important second one with a 4-3 shootout win in the first meeting between the rivals since Game Six of the 2019 Mountain Division Final.
Sampair spoke with The Sin Bin after about his line’s play in the game and how the loud atmosphere helped invigorate the Oilers:

“Felt good tonight. Our line, I thought we played well all night. Generated a lot of chances in their end, and yeah, you know, they got that last-second goal, but we were able to finish business in the shootout.”
“it’s always exciting when we get a crowd like that. You could tell they were into it; they were chanting, and I’m glad we could give them a finish like that.”

With the win, Tulsa improves to 7-9-1-0 (13 pts.) on the season before heading out on the road to South Dakota for three against Rapid City starting Wednesday. Idaho, meanwhile, moves to 8-3-2-2 (20 pts.) in 2019-20. The Steelheads now head to Allen for a Sunday matinee to close an eight-game trip.
The Oilers are already 1-4-0-0 at home against the Rush this season, and now make their visit to Rapid City where the home side is 5-0-0-0 this season. Sampair spoke about taking the intensity from tonight with them to South Dakota:

“we kinda had almost a playoff mentality tonight the way we played. And yeah, we’ve been struggling with Rapid a little bit early in the year, so we’ve gotta take this game and this mentality into Rapid and just do what we did tonight.”

You can keep track of both the Oilers and the Steelheads all season by following us on Twitter. Simply follow @SinBinOilers for our Tulsa take, @SinBinIdaho for info on Idaho, and @SinBinNews for all your AHL, ECHL, and SPHL news and notes.