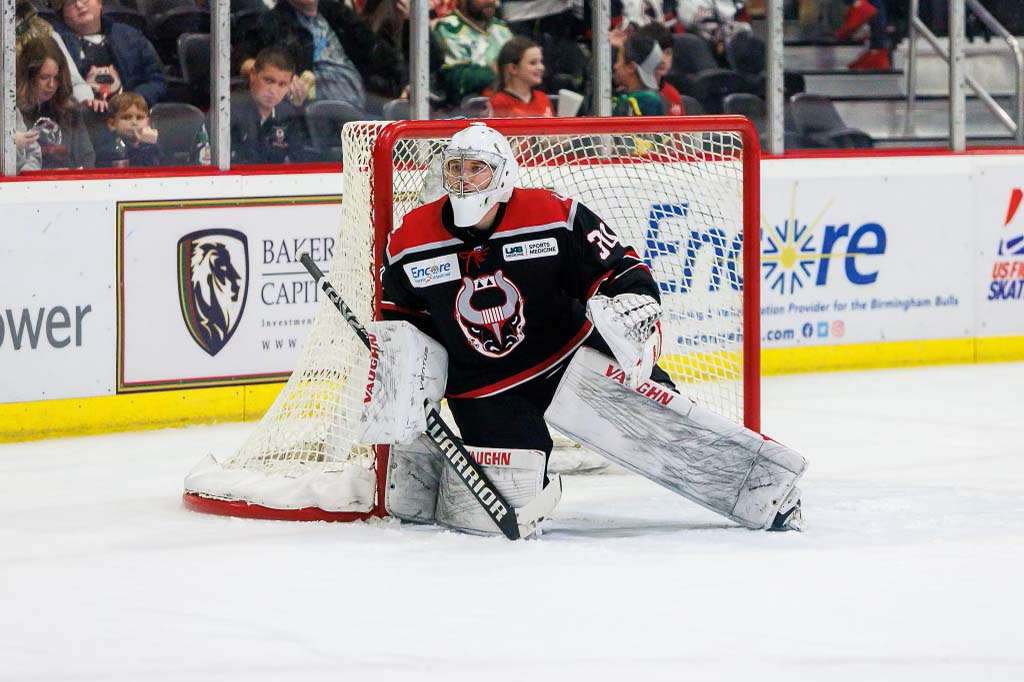 Monday afternoon, the Birmingham Bulls did what only one other team in the SPHL has done this season, shut out the Huntsville Havoc.

PELHAM, Ala. – Monday afternoon, the Birmingham Bulls did what only one other team in the SPHL has done this season, shut out the Huntsville Havoc. The last time this happened was back on November 20th, when the Peoria Rivermen managed to blank the high-powered Havoc offense in a 1-0 victory.

The Bulls came out hungry in the first period flying all over the ice. However, it didn’t take long for these two in-state rivals to share their distaste for one another. Sixty-five seconds into the first, Huntsville’s Eliott St-Pierre and Matthew Hobbs of the Bulls dropped the gloves right in front of the Havoc bench. After that, it was a very spirited tilt and ended with Hobbs taking St-Pierre down to the ice. Throughout the rest of the period, we saw both teams get some quality chances at the net, but nothing found its way into the back of it. Huntsville was given the game’s first powerplay late in the first period when Scott Donahue flipped the puck into the crowd, causing a delay of game penalty. The Havoc had 31 seconds to try and make something happen before the horn would sound, ending the first period. The Bulls’ penalty kill unit did their job and got out of the period with nothing up on the scoreboard.

Huntsville started the second with time still left on the powerplay. Former Bull Jacob Barber did everything in his power to try and make the Bulls pay in his first game back at the Pelham Civic Center since signing with the Havoc. Even after the powerplay ended, the Havoc continued to press and drew another penalty. This time it was Colton Fletcher who got called for the trip. Less than a minute later, Birmingham captain Mike Davis was called for a hook, and the high-powered offense of the Huntsville Havoc would go on a 5-on-3 powerplay. Hayden Stewart and the rest of the Bulls PK unit did their job, and the game remained scoreless. Davis and Carson Rose broke into the offensive zone in a 2-on-1 breakaway with five seconds remaining in the second. Davis passed it right to Rose’s tape, and Rose elevated the puck just enough to beat Havoc goaltender Hunter Vorva to give the Bulls their first lead of the game and set up what would be a very exciting third period.

After being outshot 23-4 in the second period and 30-14 in the game so far, the Bulls needed to find a way to give Stewart more support and try to build on the lead. The Havoc fell into penalty trouble early in the period giving the Bulls three powerplays in 11 minutes. On the third powerplay of the period, the Bulls finally struck gold. Danny Liscio took a pass from Scott Donahue and beat Vorva, giving Birmingham a two-goal lead with around nine minutes remaining. The Bulls never took their foot off the throttle all period long continued to pepper Vorva with shots. When the final horn sounded, it was the Birmingham Bulls that would come out victorious on this annual Martin Luther King, Jr. day game.

Saturday night, the Bulls went down to Pensacola and handled business, winning that one 4-0. This was the Bulls’ second victory in a row and Hayden Stewart‘s second shutout in a row. Stewart stopped all 37 shots he faced against Huntsville, making him a perfect 69-for-69 in his past two starts.

After the game, Bulls head coach Craig Simchuk said, “It was a gutsy win today. There are areas we can definitely be better in, but we will take the win. I am very happy for the guys. They found a way to close out a game. The systems are starting to gel in the right direction.”

After getting blown out by the Mayhem last Thursday night in a 6-1 loss, the Bulls have not allowed a goal in back-to-back games and are now 3-2 in the month of January. The next matchup for the Bulls is a rematch against the Macon Mayhem, which happens on home ice this Friday night in the second game of a four-game homestand.