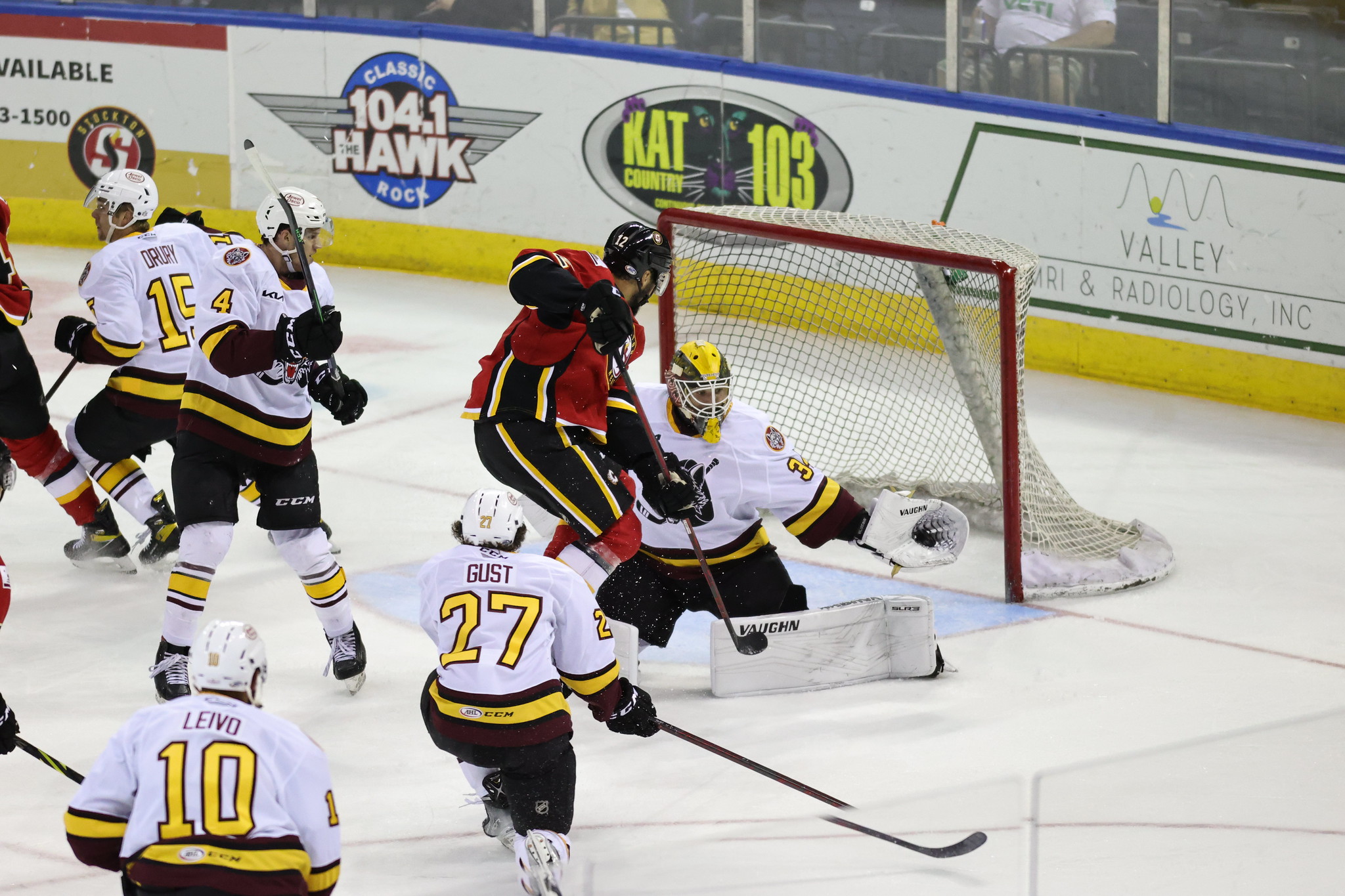 STOCKTON, Calif. – Following the first two games at Allstate Arena that resulted in a couple of dramatic endings, the Western Conference Finals turned to the west coast to begin a three game set. The Stockton Heat looked to rebound in this series by taking control on home ice, where they were undefeated this postseason. The Chicago Wolves, meanwhile, aimed to take a stranglehold on this series already up 2-0.

In the crease, Chicago would turn back to veteran Alex Lyon for the start after he was given Game 2 off in favor of Pyotr Kochetkov. There was never any mystery for the Heat, with the league’s top goaltender Dustin Wolf getting the start again in the Stockton net.

In a must-win game for the Heat, it was the Wolves that came out with the perfect road game on Stockton’s home ice, shutting them out by the score of 3-0 and taking a 3-0 series lead in this Western Conference Final.

Early on in this one, this one had a bit of a Game 2 feel to it. Chicago only registered two shots in the first ten minutes, and Stockton’s pressure on the forecheck kept the Wolves off their rhythm initially. While the condition of the ice that evening didn’t help either team much, Chicago failed to generate anything with the puck – especially on the penalty kill. Following a Game 1 3-for-3 performance, the Wolves have struggled so much as to gain the zone let alone set up with the man advantage. Despite three power play opportunities, Chicago only managed five shots on net the entire period.

Lyon was more than up to the task as well, and after a tight checking period from both sides, there was no score after one. With few shots and even fewer chances, this one had the feel of a defensive war of attrition between both sides.

The action started to pick up in this middle frame, beginning with the end of a successful kill of a Stefan Noesen minor. With the puck moving around the boards behind Lyon, Stockton’s Martin Pospisil came with the pressure on the forecheck on a path that took him near Lyon’s crease. Rather than going around the Wolves goalie – making himself big for the Heat player to do exactly that – Pospisil plowed right through the Wolves’ netminder. After spending some time on the ice, Lyon would have some fiery words for not only Pospisil but for the entire Heat bench.

Pospisil was given two minutes for interference, but the Wolves failed to convert on the power play. Still, the Wolves had a noticeable jump in their step following the incident. Their extra effort getting into the zone and their tenacity to get after pucks and keep extended shifts in the offensive zone was much improved over their Game 2 effort.

Chicago faced a monumental challenge late in the second when minor penalties to Spencer Smallman and Ivan Lodnia put the visitors on an extended penalty kill including nearly 40 seconds of 5-on-3. The Wolves saw a complete effort from their entire lineup to come up some huge shot blocks on the kill, led by defensive anchor Max Lajoie clogging up the shooting lanes on his left side. His partner Jalen Chatfield laid out for a couple of his own and with both penalties killed the Wolves’ bench was feeling the momentum swinging towards their end.

It would be another veteran leader making a play to take that momentum full force. Taking a pass from behind the net Richard Panik finally breaks the ice in this one with less than a minute remaining in the period, firing a shot in off the bar to give Chicago the lead.

Richard Panik (@Chicago_Wolves) gets his 1st of the #CalderCup playoffs to close out an *almost* scoreless 2 periods of #CHIvsSTK. pic.twitter.com/MPVaEbXSrg

With the buzzer going just after Panik’s 1-0 goal, the stage was set for a do-or-die third for Stockton.

Chicago wasn’t satisfied with playing conservatively to protect their lead – the legs came out with the opening puck drop and their game found another gear to begin the third. They hemmed the Heat deep in their own end again and it didn’t take long for this one to pay off for them. Following a turnover at the Stockton Heat blue line, Noel Gunler got the puck to Vasili Ponomarev, whose vision found  Lodnia alone at the side of the net. When everyone in a red jersey expected Ponomarev to shoot, he froze nearly every skater but one with the pass. Lodnia, inserted in the lineup in place of the injured Jamieson Rees, made no mistake in beating a sprawling Wolf for the crucial two goal lead.

Chicago smelled blood in the water – up 2-0 in the game and 2-0 in the series, the Wolves continued to press the attack. Their feet kept moving and attacking the zone, keeping up their relentless pressure that kept Stockton in their own zone instead of attacking Lyon. With the shots at 10-2 in favor of the visitors through the first 11 minutes of the period, you could see the team’s instinct to close this one out in motion.

The penalty kill remained huge for Chicago in this period as it has this whole series. Lajoie and Jack Drury came up with some more huge shot blocks to keep the danger away from Lyon and with the clock winding down the Heat gave it one last shot. With 3:09 left, Wolf was brought to the bench and Heat coach Mitch Love called his time out to draw up a play. However, little got through to Lyon, and it was another effort play – this time from Noesen – diving for the loose puck in the Stockton zone to knock it into the empty net. The 3-0 score would hold up as the winner as the Wolves finish out their defensive clinic with Lyon’s first shutout of these playoffs.

Game 4 is Friday, June 10 at 7 PM PST. If necessary, Game 5 would be Saturday at 6 PM PST in Stockton. The series will return to Chicago after that if needed.