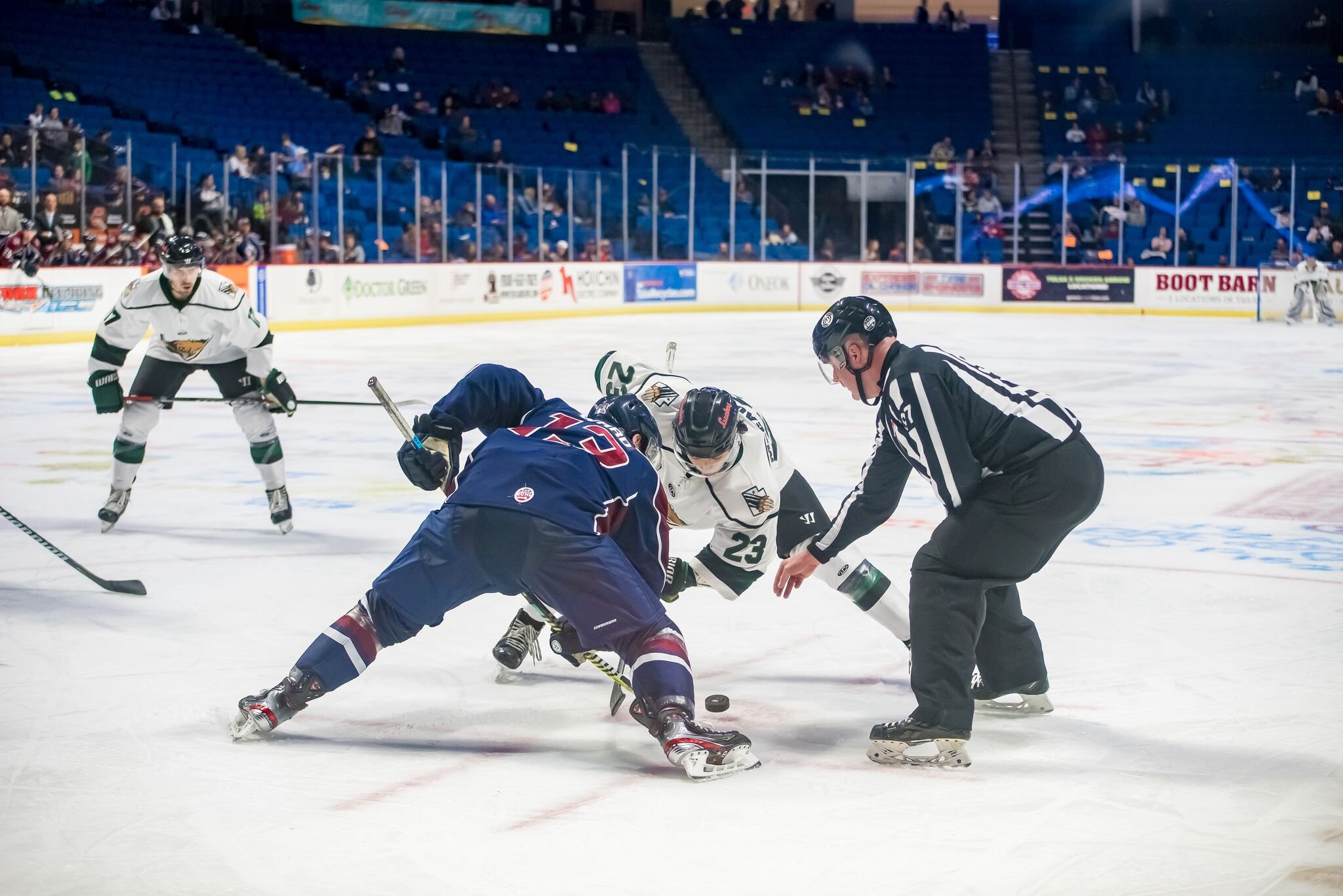 TULSA, Okla. – The Utah Grizzlies came into Tulsa with a red-hot offense and points in seven straight games.

TULSA, Okla. – The Utah Grizzlies came into Tulsa with a red-hot offense and points in seven straight games. That all came to an end against the defensively disciplined Oilers on Thursday.
Tulsa carried its focus over from Sunday’s third-period thrashing of Wichita and took control with a dominant opening frame, outshooting Utah by a 16-5 margin while scoring the game’s first two goals. The Grizzlies pushed back with a goal in a strong second, but the Oilers defense tightened again in the third and allowed just seven shots against. Tulsa added an empty-net tally with 56 seconds remaining and left with a well-earned 3-1 victory.
Tulsa captain Adam Pleskach told the The Sin Bin afterwards that his team played its best at the right time.

“Yeah, that was probably one of our better efforts of the season, especially at home against a team ahead of us in the standings. Obviously, we’re sort of near the bottom looking up, and these are the teams we have to beat that we can’t be giving up points to. So, you know, proud of the guys. That was a good 60-minute effort.”

The Oilers came focused from the start on Thursday and took the action to the Grizzlies zone early and often. The pressure forced Utah to take a delay of game minor when they cleared the puck over the glass for its defensive end, giving Tulsa the opening needed to break the ice.
The power-play goal came just 5:31 into the game, as Pleskach sent a puck to Robby Jackson who sent a low rope to the backdoor.  Jared Thomas was ready and waiting behind Grizzlies goalie Mason McDonald and directed the puck home with ease to give the Oilers the 1-0 lead.
The Grizzlies managed to hold the Oilers’ opening-period onslaught at bay for the next 12 minutes, but with 2:28 left on the clock, the visitors’ shields failed a second time. Jackson picked up his second assist of the night when he passed to Danny Moynihan for a quick shot that McDonald stopped only to have the rebound pounced on and deposited by Ian McNulty. The goal was McNulty’s third of the campaign and gave the Oilers a 2-0 lead through 20.
Tulsa kept Utah pinned in its own end for the vast majority of the frame, leading to the lopsided 16-5 shot count through 20.  The Sin Bin asked Tulsa tender Devin Williams how he stays engaged when the ice is tilted towards the other net.

“I just try to stay mentally in it. You know, just trying to watch what’s going on down there just in case they do come down and make the saves when called upon. I thought my defense made it a lot easier on me tonight — and the forwards, too — to be able to read plays and make those saves.”

Williams’ workload would increase in period two, as Utah came out determined to answer Tulsa’s early blows.  His focus was tested on an early deflection and subsequent rebound, but he stayed cool and made the saves look far easier than they were. Williams turned aside 12 of the 13 shots the Grizzlies fired in the frame, allowing Tulsa to withstand the push with the lead still intact.
The only blemish on the night for Williams came after a clearing attempt was held in and the home squad was caught flat-footed for just a moment. Taylor Richart took a pass from J.C. Brassard as he slipped in behind the defense before lifting a shot from in tight that found the top shelf over Williams’ shoulder to bring the guests within one with 14:29 still to play in the second.
Utah tried to get the ball rolling and find an equalize, holding a 13-9 advantage in shots in period two and even drawing two power plays late in the frame. The Oilers squashed the momentum in its tracks with an excellent effort on the kill, however, and retained a one-goal advantage as the contest headed for the final fixture.
Tulsa played a smart third period, controlling the puck as much as possible to slow the pace of play and keeping the talented Utah offense from loading up for chance after chance.  Utah’s best chance to find the equalizer came on a power play with just over five minutes to play, but Tulsa’s penalty kill stepped up and denied the visitors for a third time.
The Grizzlies had picked apart the PK of the Wichita Thunder on Tuesday, going a perfect 3-for-3 in a crushing 8-2 triumph. Tulsa was not going to be beat the same way, and made a concerted effort to clog the slot and keep a frustrated Utah power play to the perimeter. After the game, Oilers Head Coach Rob Murray spoke with the media and explained the details of how the penalty kill unit got the job done.

“The PK was really good. I think out of the three opportunities that they had, I’m not too sure you could say they had a real quality chance. We did an excellent job keeping them to the perimeter. But again, pre-scouting — Like you know, they scored three (power play) goals against Wichita the other night. two were shots from the point.
“I think we did a good job on Richart up top. he’s a shooter, and we limited his look at the net because we were in the shot lane. Watching the game against Wichita, he just floated in two wristers that found their way, and we did a good job taking that away.”
“Even later in the game, they were trying to make shot-passes where a guy presents his stick and they try to make passes there, and we defended that well too. Just again, I think everybody to a man played a strong game.”

Utah pulled McDonald for the extra man with 90 seconds to play, but never had a good chance to fully utilize the benefits of the risk before paying its crushing cost. With 56 seconds left, Mike McKee dumped a puck into the far corner that was chased down by a hustling J.J. Piccinich. Piccinich looked up and wired a hard pass to Charlie Sampair cutting through the slot. Sampair fired a shot into the empty net to restore the Oilers’ two-goal cushion and provide the final score of 3-1 for the hosts.
Coach Murray was thrilled with the effort his club showed throughout the game, and told the media that it was the little things that added up to a win on Thursday.

“I said to the guys after the game that one of our mantras last year was just a business-like approach, a business-like attitude. For the guys that hadn’t been around, that was a good example of that. We took care of the puck, limited offensive opportunities for them…and they’ve got a high-flying team. A lot of little things were done well and hard.”

Williams echoed his coaches sentiment when talking with The Sin Bin, saying the Oilers were focused on the details in front of him.

“I thought we got back to our attention to detail. I think last game we were pretty good at it; the couple games before that, we kinda struggled with it. but tonight, we were really detail orientated, and obviously that paid off with a win.”

Williams finished with 24 saves on 25 shots to see his record improve to 8-4-1 on the year. Tulsa is just 4-11-1 without him in net. The Sin Bin asked him what he tries to do to help provide a steady hand when in net.

“I just try and be the calmest guy out there. I have a lot of confidence in myself, but you like to portray that so the guys in front of you have confidence, just in case they do mess up. I mean, there are times when I mess up and they’re there for me. So, I think it’s a give and take…you know, I am nothing without the guys in front of me, and vice versa.”

The Oilers now head out on a five-game road trip to close 2019, beginning against two familiar foes Friday and Saturday. It starts with the fourth matchup in a week with the Wichita Thunder, with this one coming inside Intrust Bank Arena after the Oilers won two-of-three inside the BOK Center last weekend. From there, the trip heads to Missouri for 7:00pm CT showdown against the Kansas City Mavericks on Saturday.
Williams says the Oilers need to find a way to be consistent in order for the momentum to survive the bus ride north.

“Just continue with our consistency. That’s kinda been a struggle of ours for the first half of the year, and I think that’s just something we’re gonna have to overcome. That’s just something we’ve gotta do tomorrow is just go in there and try and get the win. and, like I said, just be detailed orientated and try to be consistent.”

The confidence has returned to the Tulsa locker room, and Pleskach says the team is ready to go get two wins this weekend.

“We’re a little short on guys, so it was really exciting to see everyone elevated their game tonight. You know, we’re going into two teams that we know we can beat if we bring a 60 minutes like we did tonight. So, obviously you can tell the guys are excited in here and ready to get on the road.”

You can follow the Oilers on their trip, as you can all season, by following us on Twitter where we live tweet each game.  Simply follow @SinBinOilers for our Tulsa take, and @SinBinNews for all your AHL, ECHL, and SPHL news and notes.