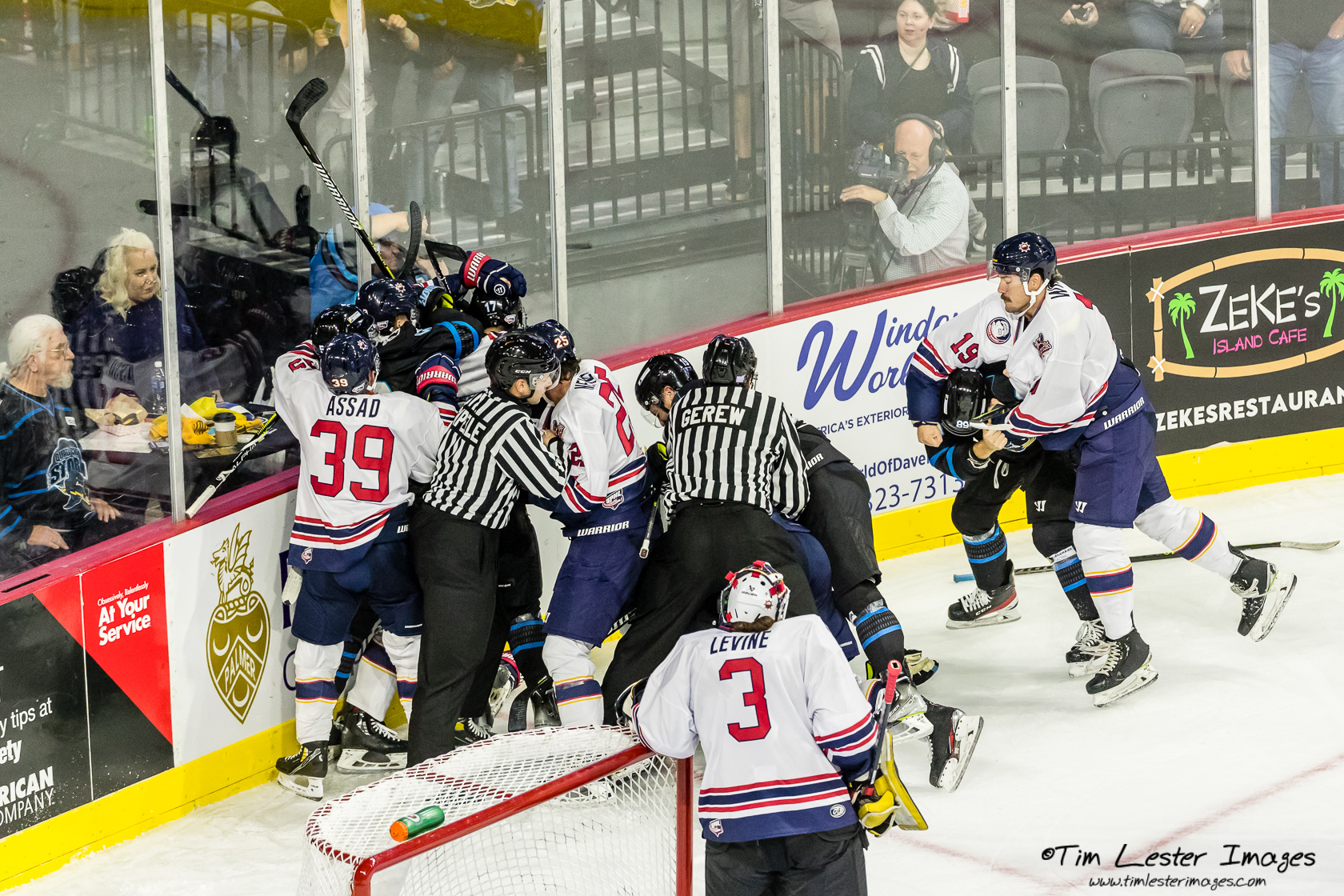 MOLINE, Ill. — The Quad City Storm opened their 2022-23 season with a victory, defeating the Peoria Rivermen 6-2. The Storm opened their season at home at the newly renamed Vibrant Arena at The MARK, welcoming a crowd of nearly 4,000 when they hosted the defending SPHL Champions. The result was different than one might expect from the champions, but the on-ice antics were far from unusual for the Cold War on 74.

Speaking on the last time the teams faced off against each other in April, head coach Dave Pszenyczny said, “That was last year, right? We’re not living in the past here, we’re living in the present, and we got game one under our belt. And we’ve just got to focus tomorrow on game two.”

The Storm started the scoring out early in the first period, not taking a lot of shots on goal to get it accomplished. On only the third shot on goal of the night for the Storm, Michael Moran sent the puck flying to light the lamp behind Eric Levine. Less than two minutes later the extra-curriculars began, but it was only towards the end of the period that fireworks were really lit. The first penalty of the season, slashing called on Kasey Kulczycki, came at 6:46 of period one, just two seconds after Taylor Pryce and Alec Hagaman engaged in sparring in front of Storm goaltender Bailey Brkin. The teams exchanged minor penalties for several minutes before a ruckus broke loose behind Levine’s net.

Ten players converged behind the net as the whistle blew, shoving and exchanging words. Mitchell McPherson appeared to put Dillon Fournier in a headlock behind the bench, while Connor Fries and Zach Wilkie dropped the gloves. Once the officials separated Fries and Wilkie, they began to skate toward their respective benches, jawing at each other the entire way. They then slipped the officials and met again at center ice to duke it out once more. This second fight led to their second fighting majors and an automatic game misconduct for having two fights in one night.

The second period was quieter in terms of penalties, but the Storm came out with a fire to add four more goals on the scoreboard. Less than a minute into the second period Jake Ratcliffe scored in the remaining seconds of a 5-on-3 power play, giving himself his first professional goal in North America.

“I mean it was a really good play, on the power play,” said Ratcliffe. “We were working in practice on that all week. [Mattson] did a great job finding me through the seam there, I took it around there quickly, and luckily enough it went in. It’s a good feeling [scoring]. I mean obviously it’s just good getting the monkey off your back early there. The first game in the year you can kind of have that confidence moving forward, trying to make a few more plays now. Definitely a good feeling.”

Peoria’s second and last goal of the night, scored by JM Piotrowski, was barely announced before the Storm struck back to retake the two goal lead with a score of 4-2. Piotrowski’s goal was the only one for Peoria that came on the man advantage. The Storm’s second power-play goal of the night was also their last of the night, coming in the early minutes of the third period thanks to Tommy Stang.

“I thought as a whole everybody played well,” said Pszenyczny. “New guys, I mean they fit really well into our system as far as what we lost with some guys retiring. And you know Ratcliffe, hell of a game; Mattson producing most of those opportunities. As the game progressed we started locking it down defensively and figuring it out. And that’s expected in game one, you only get a week to work on certain things.”

The Storm and Rivermen, as often happens, had a home-and-home series for opening weekend. The Rivermen will play host for the Storm on October 22, when they raise the banner pre-game at Carver Arena in the Peoria Civic Center.

Pszenyczny said, “I mean obviously we had some success tonight and they’ll probably change a few things up — so will we — but I think at the end of the day we gotta be prepared. They’re really good at home for a reason, all right, they won last season. It’s not an easy building to play in by any means, so we’ve got to know that that performance tonight out of them, it’s going to be way different tomorrow. So we gotta match and exceed it.”