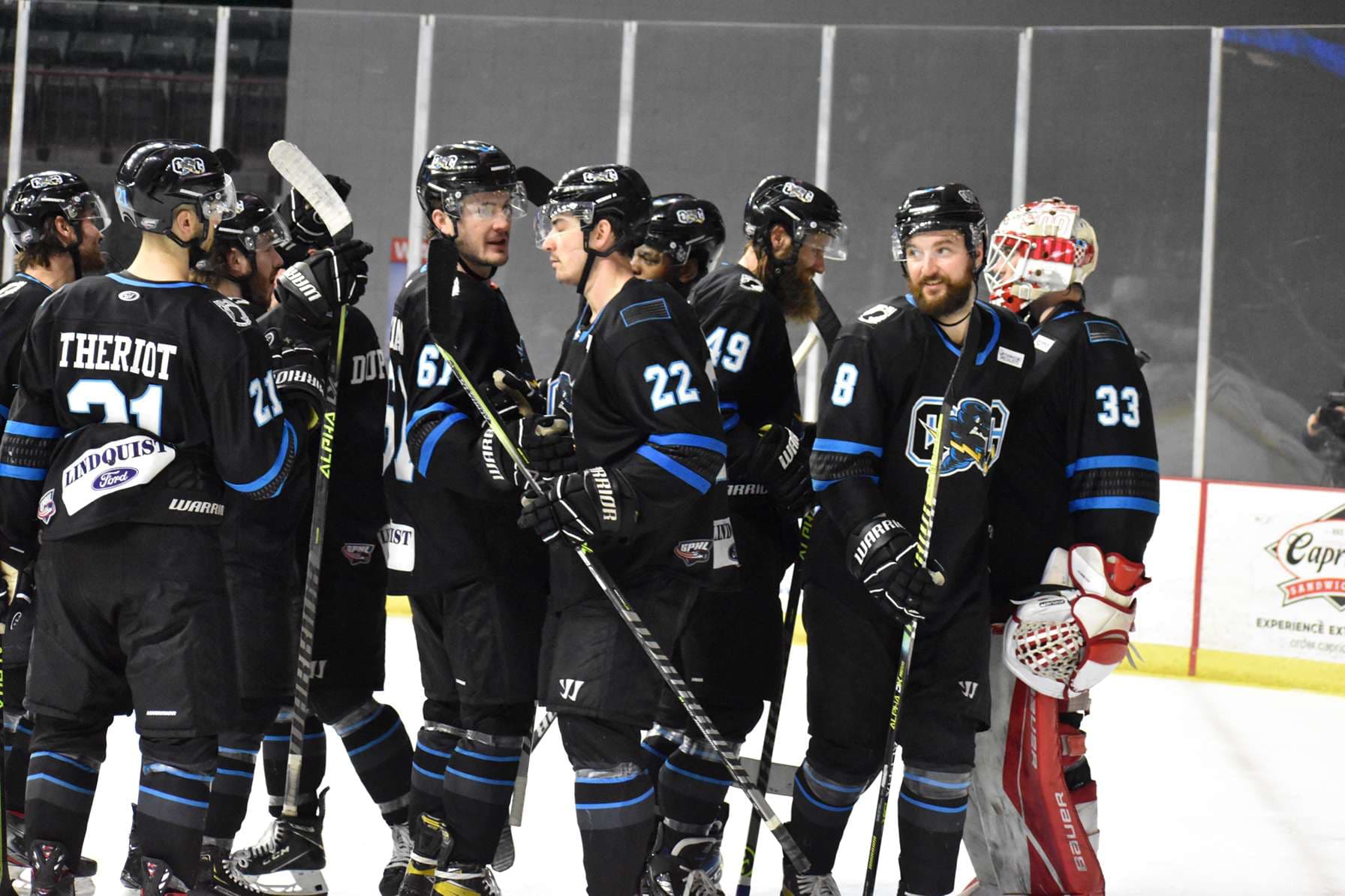 MOLINE, IL — The 2022 SPHL Presidents Cup Semifinals have begun, and the rivalry between the Peoria Rivermen and Quad City Storm has continued into the postseason. The Storm took game one of the series at home, defeating the Rivermen 4-1 at the TaxSlayer Center Wednesday night. The Rivermen now need to win both games at home Friday and Saturday if they want to secure a berth in the Finals.

“You obviously want to secure your home ice, right, and take care of it,” said head coach Dave Pszenyczny following Wednesday’s game. “We did it tonight so, just moving forward, right, we’ve got to turn the page now. It’s nice to get the first one, but we know going down there it’s not going to be an easy task.”

The Storm played dominantly from the opening puck drop, scoring their first goal of the night just a hair over two minutes into the match-up. Marcus Ortiz buried the puck with help from Shane Bennett and Cody Walsh on only the second shot on goal of the night. Quad City continued to dominate possession, keeping the Rivermen pinned in their zone for much of the first ten minutes of the game. When Peoria did bring the puck down to fire at Bailey Brkin in his fourth straight start, the rookie goaltender made save after save to keep his team in the lead.

Roughly eight minutes into the first period, Brkin made several saves in a row on a flurry of shots and rebounds, making one save while laying down after falling on his keister amongst the scuffle in the crease. Ortiz nearly scored his second of the night at 14:!5 of period one, but the puck didn’t cause the lamp to light as it bounced off the crossbar behind Jack Berry. Seventy seconds later, the goal light was lit red as Taylor Pryce scored the game-winning goal, Darick Louis-Jean assisting.

The second period saw two goals added to the scoresheet, one by each team. Pryce scored his second of the night to send himself to hat trick watch just over five minutes into the second period. Peoria had begun the middle frame dominantly, while Quad City looked to have taken a step back. The momentum shifted with the goal scored by Quad City’s captain, the Storm returning to their hard-hitting and crisp passing ways. Peoria took several penalties during the second period, none of which the Storm could capitalize on to add to their 3-0 lead.

Both the Rivermen and Storm had perfect penalty kills on Wednesday; neither team could convert on the 11 combined opportunities while on the man advantage. Peoria’s lone goal came while the teams played 4-on-4 action, as both Connor Fries and Robert Holyoke were in their respective penalty boxes to end the second period.

The Storm continued to dominate through the third period, adding another 14 shots on goal while tallying one on an empty net late in the game. Cole Golka made a diving play to pass the puck to Ortiz on the other side of the net, the latter nearly falling himself as he shot the puck. The Rivermen continued to keep Berry on the bench for the rest of the game, pushing for three more goals to tie the game in the final two minutes of regulation.

The Storm stayed out of the penalty box for much of the night, only taking a few penalties; Fries’ was the only one to affect scoring directly. Quad City players need to continue that trend of few penalties if they want to win in Peoria Friday. Being drawn into taking more penalties and leaving the team short-handed due to the rivalry between the teams only leads to goals scored by the opposing team.

“We’ve just got to stick to the game plan. I know I sound like a broken record but, you know, the game plan works. We do it right and we do it well, it’s good,” said coach Pszenyczny.

The Storm travel down to Peoria to take on the Rivermen on Friday night, with puck drop set for 7:15 at Carver Arena. If the series is tied at one game apiece following that game, the teams will face off again the following night, one of them advancing to the Finals to face an opponent that is yet to be decided.

On Thursday morning, the SPHL announced that Peoria’s Kasey Kulczycki has been suspended one game under Rule 28, Supplementary Discipline, as a result of his actions in the game. He was assessed a minor penalty for elbowing at 19:44 of the third period. Kulczycki will miss Peoria’s game against Quad City on Friday.

Be sure to follow @FPHStorm on Twitter for the latest news and updates about the Storm from this season and beyond.