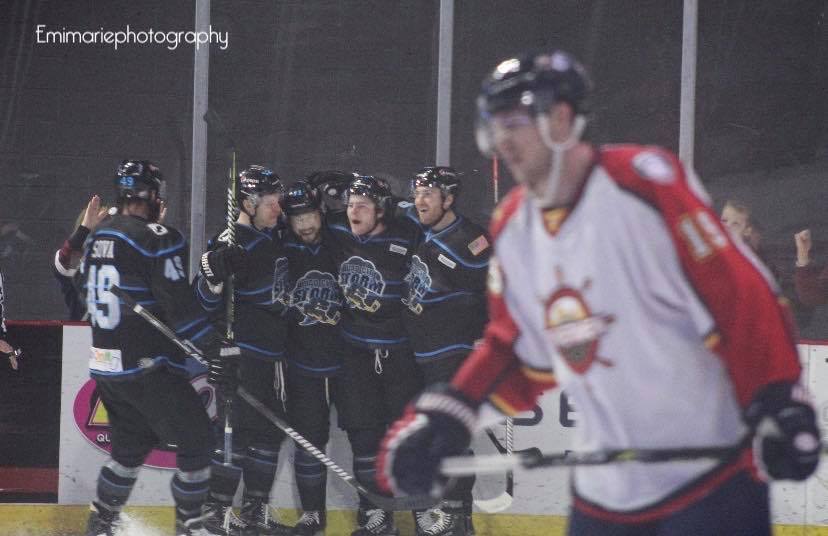 The Quad City Storm and Peoria Rivermen celebrated the end of 2019 with another battle in the Cold War on 74, and there were plenty of fireworks between the two teams.

MOLINE, Ill. – The Quad City Storm and Peoria Rivermen celebrated the end of 2019 with another battle in the Cold War on 74 and there were plenty of fireworks between the two teams. Much like how the ball drop is the same each year, 2019’s contest was much the same as 2018’s — both ended with the Storm picking up two points.
The Storm played an incredible game on Tuesday against the league’s top team. A fire had been lit under them before the game that carried through for 60 minutes, and it was quite a show to watch. If you’ve been reading my articles from this season, you’ll know there are normally three sections of my analyses. That format won’t work for this article.
In short, the Storm, for at least New Year’s Eve, had fixed all the problems that had plagued them throughout the season so far. They played as a cohesive unit that was well-oiled. Not playing the full 60 minutes wasn’t an issue for them, as aside from a few minutes to start the game they were 100% invested full effort. Not being physical enough was definitely not a problem, as there were two fights in the second period and plenty of hard hits and answered jabs throughout the game and the third period especially.

“I mean obviously a win’s a win, right?” Said head coach Dave Pszenyczny. “And obviously to do it against the top team in the league is great because it builds confidence and shows that we can get the job done. I think they responded great. I mean they carried the game most of the night.”

Some franchise history was made, as Connor Fries scored the first hat trick for the Storm. Taylor McCloy previously had scored a hat trick in the 2018 preseason game against Peoria, but preseason doesn’t count for the records.

“I’m definitely honored,” said Fries, “it does feel great for sure, definitely to score a few goals I guess, but it feels great to get the two points, and that’s really what matters, getting the W. I’m just happy that we were able to put 60 minutes together and get the dub tonight. I’m excited and hopefully 2020 we can keep this rolling.”

The bounces also went Quad City’s way on Tuesday, and while that isn’t something anyone can control, the Storm were in a position to capitalize on that luck. Fries’ second goal was a deflection after a pass by Shane Bennett, and it was a quick play that ended up being the game-winning goal late in the second period.

“It was a great play by Benny [Bennett]… And again I’d like to thank Benny for that one because he did all the work on that one I think. I think I was just in the right spot at the right time and he knew where I was and put it in the perfect spot for me,” Fries said.

The Storm had a perfect penalty kill unit on New Year’s Eve, killing off five penalties. On the other hand, the Storm also capitalized on two out of four-man advantages. The shortest power play for the Storm that led to a goal was 28 seconds when Mathias Ahman sent a rocket past Dillon Kelley late in the second period. Those two power-play goals bring the team to 12.4% on the PP, while preventing Peoria from scoring while on the man advantage brings them up to 77.1%. Those numbers are good for ninth and tenth in the league, respectively.
As is to be expected, during the third period, Peoria became frustrated due to being down several goals. That frustration led to more physicality. In previous games, the Storm have been a little too soft, but not on Tuesday. The Storm answered back in kind to the Rivermen, showing that they are capable of toeing the line without drawing penalties.
The Storm head to Alabama to start the new year, playing Huntsville on Friday and Saturday. Puck drop will be at 7 CT both nights. To pick up four more points, Pszenyczny said, “We’ve just got to keep on the same way. I’m not sure what it is when we play against Peoria, but we’ve got to bring that every night. It shows that we can play with the best of them in this league, and consistency is the hardest thing at this point. I thought it was great because we got close to a 60-minute game, which is what we need to do.”
Be sure to follow @SinBinStorm for the latest news and updates about the Quad City Storm. Don’t forget to “like” The Sin Bin on Facebook for all additional SPHL, ECHL, and AHL minor league hockey coverage!