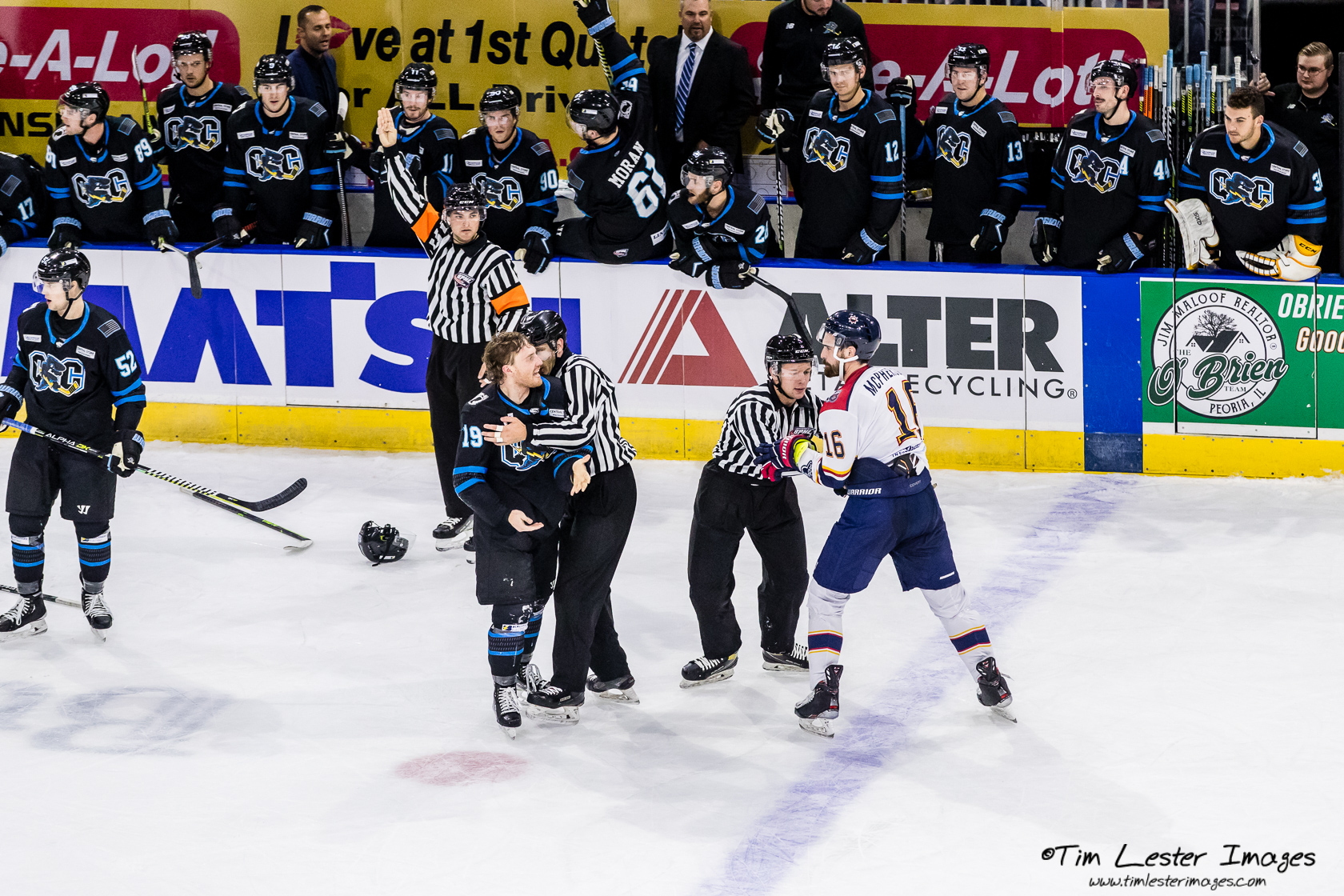 PEORIA, Ill. — The Quad City Storm and Peoria Rivermen faced off for the second night in a row, with the Storm taking another two points on the weekend. The Rivermen were defeated 2-1 in regulation, their lone goal coming in the game’s closing seconds.

The start of the game was slightly delayed due to the Rivermen celebrating last season’s President’s Cup Championship and banner raising. The Rivermen welcomed back players that were no longer on the active roster to the ice prior to the game, where they received their rings from team owner Bart Rogers and head coach Jean-Guy Trudel. The active Rivermen then received their rings before the banner was unveiled in the rafters.

As play got underway, the Rivermen did not look like the same team that had lifted the cup in April.

The Storm controlled play for the first 45 seconds of the game, as the Rivermen were still focused on last year’s successes. Quad City showed that their team had meshed well by their ability to intercept Peoria’s passes and complete their own with greater accuracy. That accuracy paid off for the visitors, as Dillon Fournier scored from the top of the slot at 2:40 of the first period, with help from Filip Virgili. The Storm went on several break-aways in the following minutes, capitalizing on the Rivermen’s defensive gaps. However, none of the breakaways were successful, as the Storm players, such as Leif Mattson or Virgili, could not get their shots off well enough to find a gap in Eric Levine.

As expected in a Peoria and Quad City match-up, bad blood and tensions quickly boiled over into shoving and fights. The first large kerfuffle didn’t occur until there was only 1:06 left in the opening frame. Mitchell McPherson brought Taylor Pryce to the ice in front of the team benches. When the Storm captain stood up, he attempted to fight McPherson through the official separating them. Both earned two minutes for roughing, though McPherson earned an extra two minutes of roughing for beginning the interaction.

The fireworks continued into the second period when Virgili scored a goal of his own while his team was still on the power play. Less than half a minute later, Rivermen captain Alec Hagaman decided to try to rouse his team from their stupor with a fight. He dropped the gloves with Tommy Tsicos, who only got a few punches in the bout, earning an instigation minor on top of his fighting major. The rest of the second period was much quieter on the goals front than Friday’s game had been, as no more goals were scored for the next nineteen minutes.

Just under midway through the final frame, Pryce and Hagaman tangled to the right of Storm netminder Bailey Brkin. A few seconds later, after play had resumed again, McPherson and Pryce decided to engage in fisticuffs in front of the benches. Afterward, as Pryce headed to the penalty box, he taunted the arena, which answered back with a chorus of booing. Hagaman earned a ten-minute misconduct for verbal abuse of officials as the penalties were being hashed out, not liking McPherson earning an instigator penalty.

Peoria outshot the Storm 17-2 in the final frame, attempting to end the shutout. They went so far as to pull Levine with two minutes left, going on a 6-on-4 play as Michael Moran was sat in the box for hooking at 18:00 of period three. It was then that the Rivermen managed to break the Brkin brick wall, scoring with 18.5 seconds remaining in the game. The Rivermen pulled Levine again for an extra attacker and once again had a 6-on-4 opportunity for the last four seconds of the game, but they couldn’t find the gap again.

“It was a hard-fought road win, you know,” said assistant coach Drew Otten. “We knew they would come out after their big celebration from winning the cup and that last year. So, we knew we had to come in and set the tone right away, and kind of get a greasy road win.”

The Storm has begun the season with a weekend sweep, collecting four points and beginning what could become a winning streak. But two games does not a streak make. The Storm will travel to Vermilion County on Friday to begin a three-in-three weekend. Their final game of the weekend will be on Sunday against the Evansville Thunderbolts. That Sunday matinee will be at the Vibrant Arena at The MARK, with puck drop set for 2:10 PM CT.