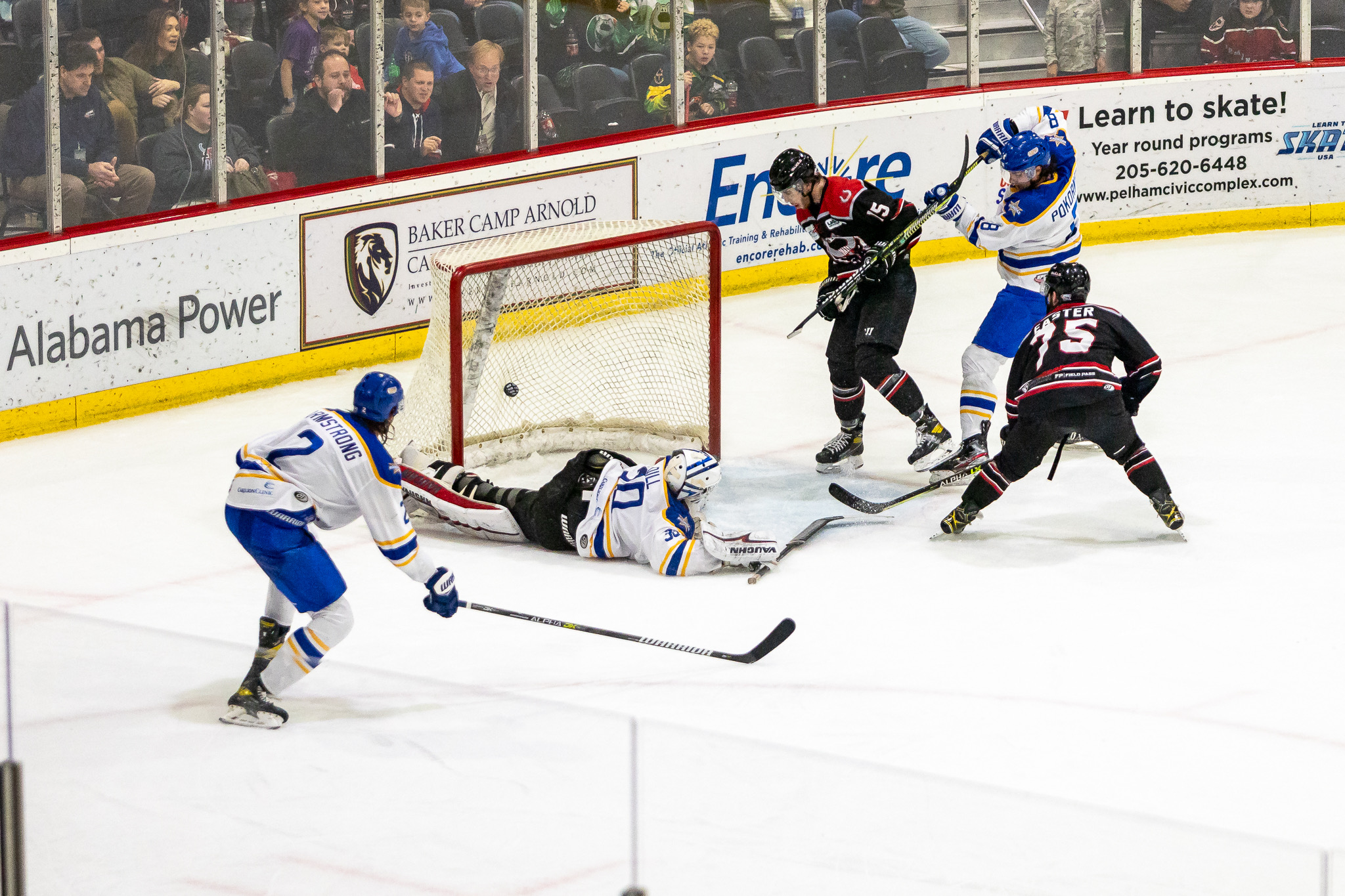 PELHAM, Ala – It was a night that ended in ways you only see happen in the movies at the Pelham Civic Complex when the Birmingham Bulls took on the Roanoke Rail Yard Dawgs.

The Birmingham Bulls held first responder night, which is something you find leagues at all levels do in almost every sport in America. Still, this night had a little something extra added to it. Back in December, the Birmingham Bulls family lost not just a fan but a brother in Christopher Easter. Easter was a local firefighter and an avid men’s league hockey player. The Bulls honored Easter in a big way in this game. His wife and brother took part in the ceremonial puck drop, but that wasn’t where it stopped. Bulls captain Mike Davis wore Christopher’s jersey number 75 and even had Easter printed on his nameplate rather than his own. Davis and the rest of the Birmingham Bulls prevailed Friday night, defeating the Rail Yard Dawgs by a score of 4-3 in epic fashion. 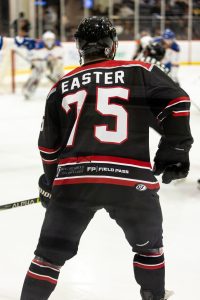 When the puck dropped in this game, the energy from both sides was high. The game got off to a physical start with plenty of excitement on both ends of the ice. Roanoke captain Travis Armstrong got the scoring started. Armstrong took a pass from teammate Chris Vella and beat reigning SPHL Warrior Hockey Player of the week Hayden Stewart at the 6:28 mark in the period. The Bulls found themselves in an all too familiar spot, playing from behind. It didn’t last long, though. Birmingham rookie forward Carson Rose found the back of the net less than two minutes later, and the score was all tied up at one goal apiece.

Things got a lot more physical at this point, and Charlie Pelnik and Davis dropped the gloves in front of the Bulls bench after Pelnik laid a hit that Davis didn’t much care for. The remainder of the period would be a physical grind from both sides, and the teams headed into the locker room deadlocked in a tie.

The second period lived up to expectations, and just 3:48 in, Rose tied things up once again on an impressive individual effort. Rose was hammered into the boards but maintained control of the puck. Rose skated around the defender and beat Roanoke goaltender Henry Dill short side. Late in the period, Roanoke’s Matt O’Dea broke the tie giving the lead back to the Rail Yard Dawgs with under five minutes remaining in the second. At the 18:03 mark of the period, Brady Heppner added another one for the Rail Yard Dawgs when Stewart lost control of the rebound. Heading into the third period, the Bulls had their work cut out for them, trailing by a goal.

Roanoke locked things down in the third, trying to protect their one-goal lead. 13:31 into the period, a newcomer to the Bulls, Jake Pappalardo, skated into the offensive zone and snapped a wrist shot past Dill, tying things up again. With under two minutes remaining is when the magic happened, Davis and Rose skated into the offensive zone in a two-on-one breakaway with a second Rail Yard Dawg defender in tow. Davis beat his defender, then avoided the poke check by Dill. He then switched to the backhand and sent the puck into the back of the net for what would be the game-winner. Immediately after scoring the goal, Davis pulled up the nameplate on his jersey, saying this one is for you, Easter. With 1:22 remaining in the period, the Rail Yard Dawgs pulled Dill for the extra attacker, but the Bulls hung on to the lead, capping off a storybook ending to a hard-fought game between both clubs. 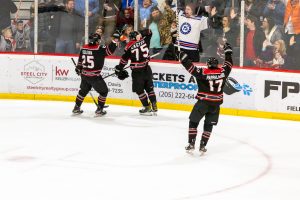 After the final horn sounded, both captains (Davis and Armstrong) got into a fight in the corner, and there is a pretty good chance both guys may be sitting out for the next game due to a suspension. Rose continued his dominance against the Rail Yard Dawgs this season, scoring his fourth and fifth goals against them this season. Both goaltenders did an excellent job in net in this battle, Stewart stopped 32 of 35 shots, and Dill stopped 30 of 34.

Next up for the Bulls is a road trip to Macon, GA, against the Macon Mayhem. The last time these two teams met was a week ago, and the Bulls came out on top in that one by a score of 3-1. The Mayhem handled business during the last time the Bulls played in Macon, defeating the Bulls 6-1. Macon has struggled as of late and has allowed 26 goals against in their last three games while only scoring five of their own. Macon will also be coming off a 3-0 shutout handed to them by the Fayetteville Marksmen on Friday night. Puck drop is set for 6:30 PM EST at the Macon Centreplex, and if this one is anything like the past three meetings this season between the two squads, it’s going to be one you won’t want to miss.