DES MOINES, Iowa – The first two games in the Lone Star State had not been very pleasant for the Iowa Wild, being defeated both times by the Texas Stars, including Saturday night when they fell behind 3-1 before losing 4-3.

DES MOINES, Iowa – The first two games in the Lone Star state had not been very pleasant for the Iowa Wild, being defeated both times by the Texas Stars, including Saturday night when they fell behind 3-1 before losing 4-3. Sunday afternoon, it looked like more of the same, as Iowa found themselves trailing 2-0 after one period. However, two goals by Nico Sturm helped spark a rally as the Wild defeated the San Antonio Rampage, 3-2.
San Antonio would stagger the Iowa early, scoring just nine seconds into the contest. The opening faceoff was won back to Jake Dotchin, who passed it across to Jake Walman in his own end. Walman shot the puck through the neutral zone where Ryan Olsen scooped it up along the boards just inside the Wild end. He moved in on Dereck Baribeau, firing a wrist shot that beat the Wild goalie to the far corner to make it 1-0. 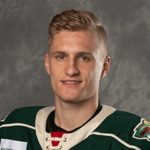 Baribeau settled down after giving up the early goal on the first shot he ever faced for the Wild, as he was solid for much of the first period. Even so, the Rampage were able to extend their lead with just over two minutes left in the frame. Andres Borgman had the puck down low to the right of the Iowa goaltender. He made a great pass across the crease to a wide open Nolan Stevens, who blasted the one-timer in for his second goal of the year.
The Wild were struggling but came out of the first intermission with a new game plan, and the contest began to change as a result. Iowa, who had been outshot 11-9 in the first, were a lot more tenacious in the second, dominating play as they outshot the Rampage 15-8.
They cut the San Antonio lead in half at 5:14 of the second period. The Rampage forecheck was keeping the puck deep in the Wild end as they had two point-blank opportunities that Baribeau made nice saves on. Eventually, Sam Anas was able to pass the puck toward Sturm in the neutral zone. Sturm tapped the puck ahead, then outraced two San Antonio defenders to reach the puck first. He skated in on Adam Wilcox before firing a wrist shot that trickled through the Rampage netminder’s pads and in for his fifth goal of the season. 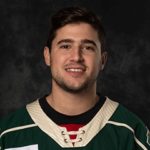 San Antonio held the one-goal lead coming out of the second break, but Iowa would stun them when Luke Johnson scored his second goal in as many nights just 23 seconds into the frame. With the Wild on a power play, they won the faceoff in the Rampage end. The puck was passed back to Anas, who passed it across to Brennan Menell. Menell directed the puck to Johnson at the left faceoff circle, who fired a wrist shot that beat Wilcox to tie the score at two. It was the third goal in Johnson’s four games since joining the Wild.
Halfway through the period, the Wild took their first lead of the game. Anas carried the puck into the Rampage end down the right boards. He then made a perfect behind the back pass toward the slot right onto Sturm’ stick. Sturm moved to his backhand, then to his forehand before wristing a shot through the five hole for his second goal of the game. For Anas, it was his third assist of the game and fifth point of the weekend, as he had two goals on Saturday night against Texas. 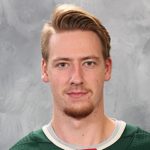 After giving up the two first period goals. Baribeau was outstanding. He stopped the final 22 shots he faced, including 13 in the third period. He finished with 32 saves total, earning the victory in his first AHL start. Menell added two assists.
The Iowa Wild (12-6-4) remain in San Antonio as they face the Rampage on Wednesday in a late morning affair. The puck drops at 10:30am CST.
Follow Robert on Twitter for all your coverage, news, and notes on the Iowa Wild!