Welcome to Syracuse Speaks, a podcast for The Sin Bin!

Now in its third season, Syracuse Speaks aims to cover the Syracuse Crunch, its organization, and the AHL from the stands. Host Alexandra Ackerman has been covering Syracuse on the internet since 2008, and aims to share her passion for the team and the league with her listeners. 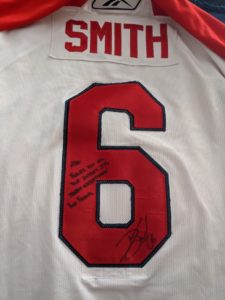 On this episode, recorded August 25, 2020, Alex starts a new series for her podcast that will discuss her collection of game-worn jerseys. She kicks it off with her memories of former Syracuse Crunch captain Dan Smith, a defenseman who played for the team from 2007-2009 when the Crunch was affiliated with the Columbus Blue Jackets. This episode takes the listener through her decade-old bond with him.

The inspiration to publish this particular tale was based on her newest jersey acquisition — one of which Smith offered to sign for her. Posting a picture of the jersey on social media prompted her realization that many of her followers weren’t fans of the team when he played there. She felt his story – and the team history in his jersey and the others in her collection – deserved to be shared.

Listen to the episode now!

Syracuse Speaks is hosted on Anchor, but is distributed to many of the major podcast platforms including Apple Podcasts, Google Podcasts, Breaker, Overcast, Pocket Casts, RadioPublic, Spotify, and Stitcher. The royalty-free music featured in this episode was by Purple Planet Music and Kevin MacLeod (incompetech.com). Licensed under Creative Commons: By Attribution 4.0 License.