Welcome to Syracuse Speaks, a podcast for The Sin Bin!

Now in its third season, Syracuse Speaks aims to cover the Syracuse Crunch, its organization, and the AHL from the stands. Host Alexandra Ackerman has been covering Syracuse on the internet since 2008, and aims to share her passion for the team and the league with her listeners.

On this episode, recorded September 23, 2020, Alex discusses the next jersey in her collection: a St. Patrick’s Day jersey worn by forward Mark Rycroft during the 2007-08 Crunch season. 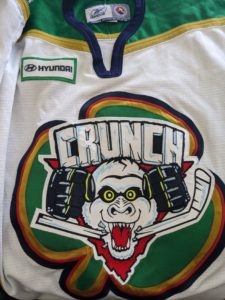 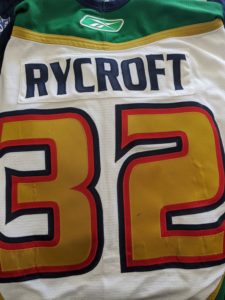 This one requires a little bit of context.

On March 8th, 2008, the Syracuse Crunch honored the Syracuse Blazers, a team whose 1972-73 squad won the Eastern Hockey League’s championship. On that team was Al Rycroft, Mark Rycroft’s father. Al Rycroft was in attendance for the ceremony, as were other players from the team that year.

That evening, during the actual game, the Crunch lost to the Wilkes-Barre/Scranton Penguins 2-1 in a shootout. Syracuse had struggled for much of the 2007-08 season to look like a true playoff contender, so fans were pretty happy that the team came away with a shootout loss.

That single point would be the start of something big. Crunch fans just didn’t know it yet.

A few games later, on March 16, the Crunch would don St. Patrick’s Day jerseys and would claw to an overtime victory against in-state rivals Binghamton, winning in overtime 4-3. At the time, fans were excited by the continuation of what was a mini-winning streak, one that stood at three after the victory over the B-Sens.

That winning streak would go on to end up in Syracuse’s record books, finally ending with the culmination of the regular AHL season on April 13 — 15 games after the streak had started. That series of games in March, a series that started on March 8 and included the game with the St. Patrick’s Day jerseys, was the beginning of a special time for many Crunch fans, including Alex. This jersey in her collection is a bit more than just one that belongs to a former player.

Listen to the episode now!

Syracuse Speaks is hosted on Anchor, but is distributed to many of the major podcast platforms including Apple Podcasts, Google Podcasts, Breaker, Overcast, Pocket Casts, RadioPublic, Spotify, and Stitcher. The royalty-free music featured in this episode was by Purple Planet Music and Kevin MacLeod (incompetech.com). Licensed under Creative Commons: By Attribution 4.0 License.