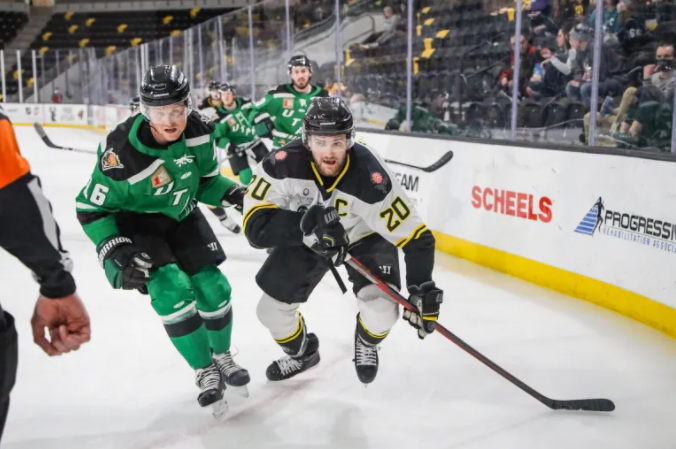 CORALVILLE, IA – Benjamin Tardif scored the game-winner 2:37 into overtime to lead the Utah Grizzlies to a 5-4 victory over the Iowa Heartlanders on Wednesday evening. Utah twice rallied from deficits in this contest, eventually forcing overtime. Mason Mannek and Brian Bowen each scored two goals for Utah. Ryan Kuffner recorded three points for the Heartlanders.

This was a wild first period that saw 28 shots taken and six goals scored. It started just one minute into the contest when Kuffner scored his seventh goal of the season to give Iowa the lead. Kuffner stole the puck inside the Grizzlies zone, then fired a wrist shot from inside the right faceoff circle to beat Trent Miner.

Just 95 seconds later, Fedor Gordeev made it 2-0. Kaid Oliver won the draw back to Gordeev at the point, who lifted a wrist shot over the shoulder of the Utah netminder for his second goal of the year.

Utah responded 37 seconds later. Zac Robbins passed the puck to Bowen, who moved in from the right wing, firing a laser wrist shot that beat Hunter Jones for his 17th goal of the year.

Iowa restored the two-goal lead just after the 11-minute mark as Zach White delivered his seventh goal of the year. With the Heartlanders on the power-play, Kuffner fired a shot from the point that hit Kris Bennett and deflected toward White. He quickly pounced on the loose puck, putting it past Miner to make it 3-1.

As they had before, the Grizzlies responded with a goal less than a minute later to pull back within one. Bowen intercepted a clearing attempt, then beat Jones with a quick shot for his second goal of the game. With a little under three minutes left in the period, Luke Martin fired a one-timer that Jones made a great save on, but no one cleared out Mannek, allowing him to put the rebound in for his 14th goal of the season. That tied the score at three, heading to the first intermission.

In the second, each team scored a goal. Iowa retook the lead just before the 11-minute mark on Bennett’s 17th goal of the year. Kuffner dished the puck to Bennett at the left faceoff circle, who blasted a one-timer by Miner.

Dereck Baribeau replaced Jones to start the second period and had seen very little action in the frame, facing just three shots, but Mannek tied the score with 37 seconds left in the period. With Utah on the power-play, Martin took a shot that Mannek redirected past Baribeau to tie the score at four, heading to the second intermission.

Surprisingly, after 43 shots and eight goals through the first two frames, neither team could light the lamp in the third period. That sent the contest to overtime, where Tardif delivered the game-winner. Martin passed the puck to Tardif, who swept in front of Baribeau, lifting a backhander that beat the netminder for his seventh goal of the season.

Miner faced 42 shots in the contest, stopping 38. Martin had three assists, and Bradley added two. Kuffner had a goal and two assists, while Bennett had a goal and an assist for the Heartlanders. Baribeau stopped 13 of 15 shots.

These teams will go at it again on Friday. The puck drops at 7:00.