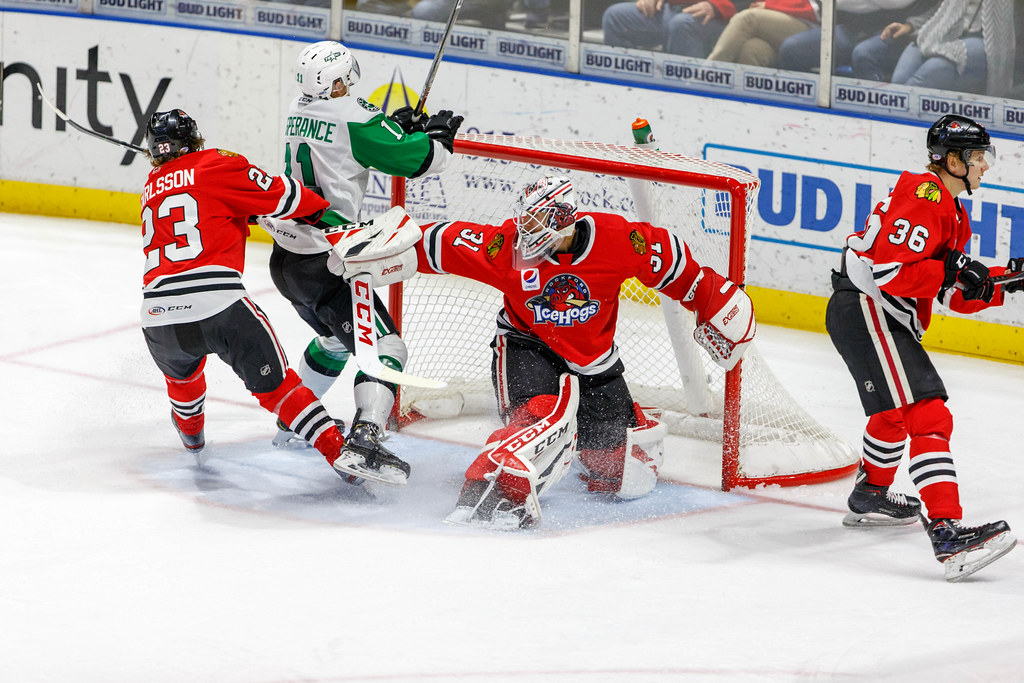 Taxi Squads Will Have Significant Impact on IceHogs

Taxi Squads Will Have Significant Impact on IceHogs

ROCKFORD, Ill. – The depth of the Rockford IceHogs is about to diminish substantially.

The NHL will be requiring each of its teams to carry a taxi squad throughout the 2021 season. Just how will this roster expansion alter the fortunes of the Chicago Blackhawks AHL affiliate? Let’s assess the impact.

The guidelines pertaining to the taxi squad are explained by the folks at capfriendly.com. Let’s focus on three portions of the announced rules that will likely have a huge impact on the IceHogs when AHL action begins.

“Minimum four players to a maximum of six.”

Even at the minimum, Rockford’s roster is going to be heavily compromised.

A veteran skater who might otherwise be leading the piglets at the BMO (read: Brandon Pirri) could be on Chicago’s taxi squad for the bulk of the season. The acquisition of Pirri was in part to inject some experience and offensive punch to the Hogs. Now, there is a very good chance that never happens.

The way the roster is constructed, the remaining spots on the taxi squad will likely be prospects that might have shuttled between Chicago and Rockford this season. That could include second-year pros like forwards Brandon Hagel and Philipp Kurashev. Defenseman Lucas Carlsson and Nicolas Beaudin might also find their way onto the taxi squad.

It all depends on how the Hawks wish to use the required spots. Chicago might elect to have their prospects skating in Rockford as opposed to sitting in a crowded team box watching the Blackhawks. Right now, however, there are few veterans signed in the organization that could fill the taxi squad.

Chicago has five open contracts that could be offered before the limit of 50 is reached. There are plenty of talented players who have NHL experience that could be brought in to help fill in needs on the Hogs or their parent club. It remains to be seen if the Blackhawks will use this option.

“One goalie required on the taxi squad for teams with less than three goalies on the active roster.”

No matter how you slice it, three of the Blackhawks NHL-contracted goalies will be in Chicago. I would guess that Malcolm Subban, Collin Delia, and Kevin Lankinen are the three netminders that will fill this requirement.

That leaves Matt Tomkins to pair up with Cale Morris, the Notre Dame standout who signed an AHL contract with Rockford. Tom Aubrun, Rockford’s other AHL signing, is currently assigned to the Indy Fuel of the ECHL.

Tomkins actually grabbed starts from Delia early in the 2019-20 campaign when Delia struggled in net. He earned an NHL contract mid-season and played well in limited action with Rockford. Getting steady AHL work would be a huge opportunity for Tomkins.

A Tomkins/Morris tandem could work out for the Hogs, but won’t carry the AHL experience that Delia and Lankinen did for the bulk of 2019-20.

“Taxi squad members cannot practice or join activities other than those with the NHL team.”

The 64,000-dollar question is whether or not NHL teams can move players between the taxi squad and the AHL during the season. I would assume that movement would be allowed in a similar fashion to prospects being recalled and reassigned, so long as the proper waiver rules are applied.

This would allow prospects to get a taste of the NHL life for a couple of weeks and still get in their development in the AHL. It also might keep prospects from twiddling their thumbs for the better part of the winter.

Whatever flexibility exists in the taxi squads, Rockford’s depth is still going to take a big hit. It’s true that this will be a league-wide issue for AHL teams. However, as an organization that is heavily built on youth and the Hawks a bit thin on high-end prospects, the Hogs may feel the pinch a bit more than other clubs.

Currently, only three of Rockford’s AHL signings (Aubrun, along with forwards Riley McKay and D.J. Busdeker) have been assigned to the ECHL. A lot of skaters who would normally be playing with the Fuel will likely remain with the Hogs this season.

There certainly are a lot of questions heading into what will be an abbreviated training camp in the coming weeks. For the time being, we can only speculate as to how Chicago handles its taxi squad…and how those decisions affect the IceHogs.

Give me a follow on Twitter @SinBinIceHogs and also @JonFromi for thoughts, recaps, and news on the IceHogs throughout the season.