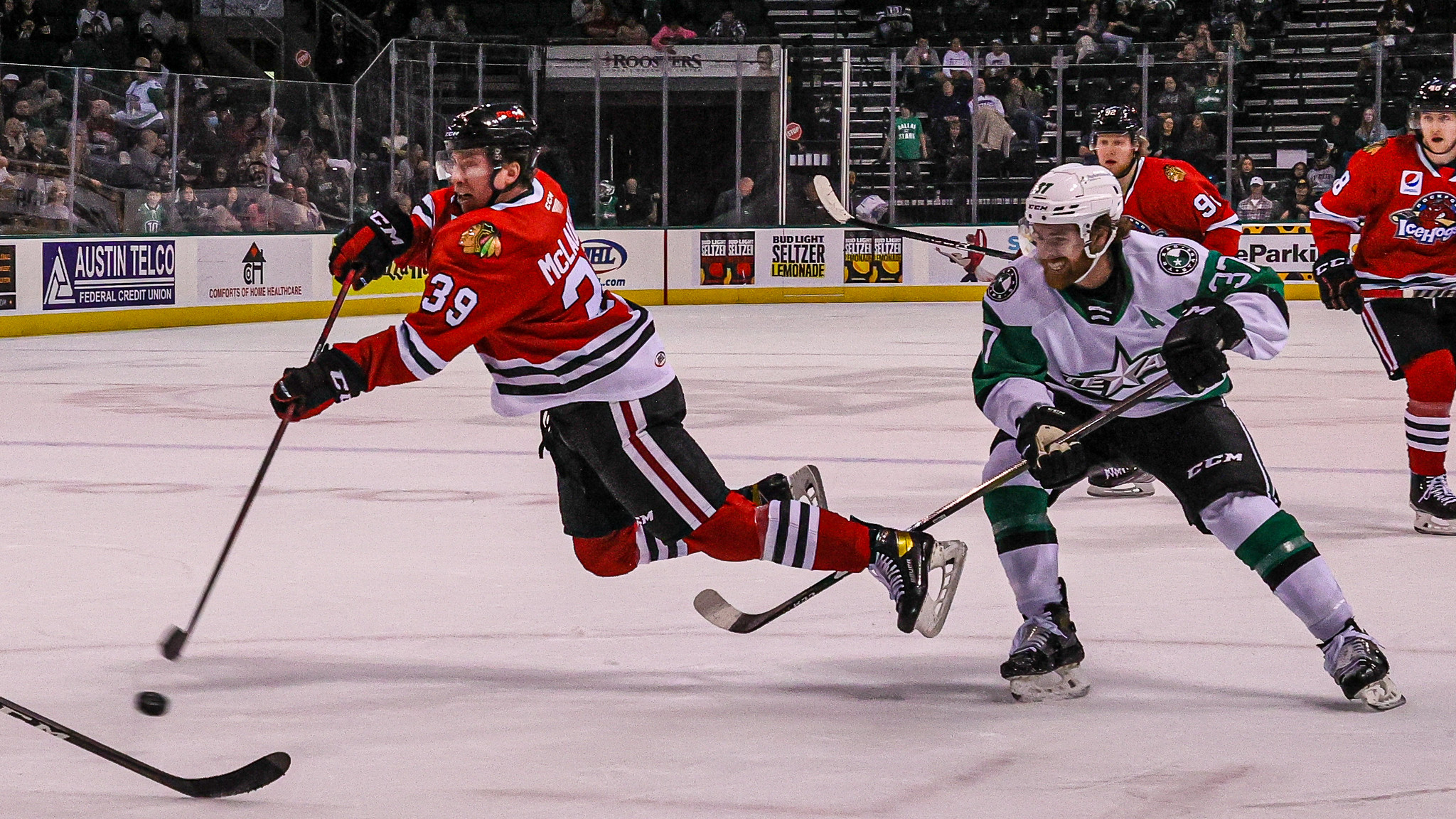 In what was a change of pace from their previous four home games, the Stars got out in front and never looked back, earning a split with a 3-2 victory

CEDAR PARK, Texas –  The Stars took to the ice Saturday night to close out their two-game set with the Rockford IceHogs. In what was a change of pace from their previous four home games, the Stars got out in front and never looked back, earning a split with a 3-2 victory.

Similar to Friday night’s contest, the Stars came out of the gate struggling to contain the speedy forwards of Rockford. In what was an exciting first period, the Stars were more intent on being physical and holding the puck in their own zone. Despite their best efforts, the Stars were still giving up rush chances early and often. The difference between Friday and Saturday’s contest: Rockford didn’t capitalize on any of these opportunities. Anton Khudobin was starting in net for the second straight night. After giving up two breakaway goals on Friday, he bounced back by shutting down the likes of Lukas Reichel and Dylan McLaughlin, both of whom had great games in the series opener. The Stars went into the first break without allowing a goal, but did not hold the lead.

The second period started with a bang. After Rockford had held the puck in the Stars end for the first two minutes, Texas jumped out in front after captain Curtis McKenzie buried a rebound off the goaltender’s left pad. After the McKenzie goal, the Stars buckled down and played with confidence. Throughout the second period, the Stars were bombarding Rockford’s goaltender Arvid Soderblom and negating every chance at a breakout by the young forwards. The Stars continued to dominate the rest of the period, but hadn’t scored an insurance goal to illustrate their hard work. That was until McKenzie potted his second goal from the same spot with just over a minute to play in the period.

Heading into the final 20 with a two-goal lead and a man-advantage, the ingredients for a win were there. Sticking to the script they wrote in the second period, the Stars were dominating on the forecheck and back checking with efficiency. In what was probably their best 30 minutes of hockey this season, the win was inevitable. However, the Stars weren’t interested in letting their foot off the gas. It was just over nine minutes into the period when Tye Felhaber scored his first of the season off a Ryan Shea rebound.

With a three-goal lead and just ten minutes left to play, there was no doubt the Stars had this one in hand. That was until the IceHogs crept back into the game with two quick goals in the final six minutes. First, it was Mike Hardman sneaking one five-hole while standing in the crease. Then it was Reichel getting on the board after being stonewalled all night by Khudobin. Suddenly, the Stars lead was diminished to just one with just over two minutes left to play. The IceHogs had a tough time pulling their goaltender for the extra attacker, but were afforded roughly 90 seconds of a man-advantage. Despite the extra attacker for the final 90 seconds, the IceHogs were unable to equalize and the Stars staved off the comeback attempt.

Saturday night’s game was the best the Stars have looked in weeks. For 55 minutes of this game, they were strong on the puck, defensively sound, and physical in the offensive zone. It has become apparent that this team’s biggest advantage is their size and work ethic. In their matchup with Rockford on Friday, they were constantly being outran by the IceHogs’ forwards. While there were still a few chances on the break, most were only half a step ahead of the defense and all were stopped by Khudobin. The adjustments made during the first intermission in Saturday’s win were what fans have been looking for.

There seems to be an identity forming and the players who are more reliable are rising to the top. Saturday night, both Riley Damiani and Joel L’Esperance were superstars. Though Damiani failed to record a point tonight, he had several shots on goal from in close and was the first to the puck almost every time he stepped on the ice. L’Esperance was giving Soderblom fits all night. With every shot he took, there was likely a high-danger scoring chance to follow. In addition to these two, Ty Dellandrea and Anthony Louis are starting to give teams problems with their physicality, skill, and tenacity.

The parts are here for the Stars to turn their season around, and with just under 50 games left to play this season, they have enough time to get things figured out, especially now that they have their goaltending situation figured out. The roster is starting to shake out to what we can expect the rest of the season and the players are finding their role and how they can help this team succeed.

The Stars will return to action on New Year’s Eve when they will square off with the Charlotte Checkers in a two-game series. Their two-game series with the Manitoba Moose has been delayed due to the Moose being shutdown with a COVID-19 outbreak and will be made up at a later date.